Longford GAA championships are something special

First round senior and intermediate games this weekend 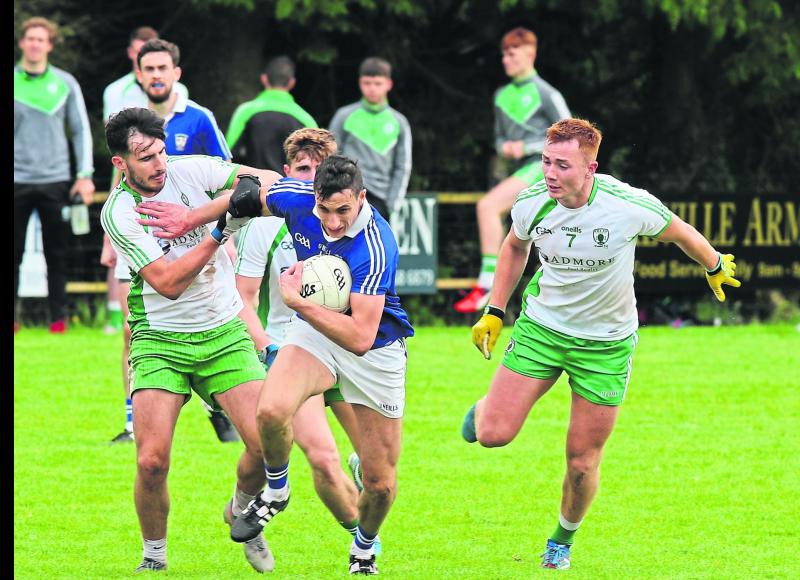 Darren Gallagher on the ball for Granard in this tussle with Killoe opponent Mark Hughes with Ryan Moffett also in the picture. Action from the ACL Division 1 game at Higginstown Photo: Matt Smyth

When you consider that the chance of GAA club action this season looked slim with the country ravaged by the outbreak of the dreaded coronavirus pandemic, the start of the 2020 Longford Senior and Intermediate Football Championships this weekend is something special during these very strange times.

The attendances might be restricted to 200 at the moment in compliance with the current Government guidelines and subject to HSE advice but the high level of interest remains the same in the battle for the treasured county titles.

The most attractive match in the group stage of the Connolly Cup is the clash of neighbouring rivals Colmcille and Mullinalaghta at the Dromard grounds next Sunday evening, throw-in 6.30pm.

Hammered by St Columba’s in the earlier rounds a couple of years ago, highly charged Colmcille came storming back to score a sensational win over the reigning Longford and Leinster club champions in the quarter-final last season.

Whoever loses this intriguing rematch will be under pressure with the remaining games in the group against Rathcline but the general opinion is that Mullinalaghta are in pole position in the race for the county title.

The signing of former Cavan star attacker Cian Mackey from Castlerahan is a major boost for St Columba’s but they certainly cannot afford to be complacent as the recent surprise defeat against Abbeylara in the Division 1 league will testify.

With Granard and Rathcline given a reprieve after suffering the disappointment of relegation from the top flight last season, 12 clubs will compete in the race for the Longford SFC title.

The reigning champions Killoe, minus Sean and Padraig McCormack, will kick-off the championship against Clonguish at the Monaduff grounds, Drumlish on Friday night (throw-in 8pm) and this is a very intriguing game that could go either way.

St Mary’s Granard take on Dromard at Lynch Park, Abbeylara (throw-in 7pm) while there are three first round games in the Intermediate championship  this weekend.

On Sunday evening Cashel will confront Sean Connolly’s at Moran Park, Carrickedmond with a 6.30pm throw-in while there is a first round bye for Ardagh Moydow as seven teams compete for the Gerry Hennessy Cup this year.

In the top flight there are first round byes for Rathcline, Mostrim, Carrickedmond and Abbeylara who will enter the senior championship arena the following weekend.

Also read in the Leader the reports on wins for Abbeylara (v Slashers) and Killoe (v Granard) in the All County Football League Division 1 while the Senior Hurling Championship started on Saturday evening last, resulting in a victory for Wolfe Tones Mostrim over the title holders Clonguish Gaels

Longford Town FC were back in action in the Airtricity League last weekend with a draw away to UCD on the return to First Division football on Friday night. But there was no joy for Daire Doyle’s side in a disappointing defeat against Bray Wanderers at Bishopsgate on the Bank Holiday Monday

Sport is bouncing back and all covered in the Longford Leader . . . .