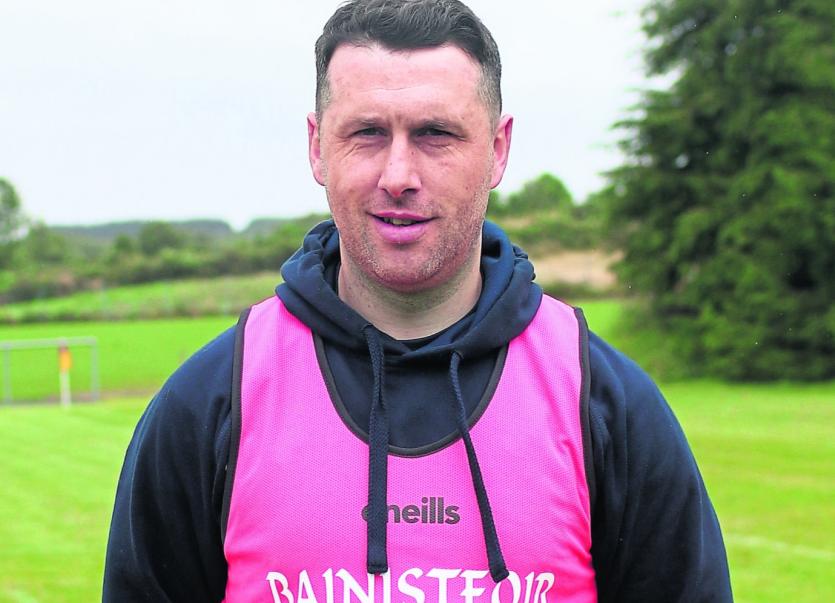 Former Roscommon player John Rogers from Strokestown, in his second season as the manager of the Clonguish senior football squad Picture: Syl Healy

The long wait is over for the clubs in the county with the restart of the competitions and the return to league action this weekend for the senior, intermediate and junior teams has the GAA buzzing again.

Despite the Covid-19 restrictions with only 200 people allowed at each venue (a figure which includes players, team mentors, officials and stewards) and the continued closure of the dressing rooms until further notice, the clubs are working hard to get back to some sort of normal.

Between the training sessions and the staging of several challenge games, the players are showing a lot of enthusiasm despite the fears of a second surge of the dreaded virus as the country gradually emerges from the lockdown stretching back to March.

County champions Killoe welcome Colmcille to Emmet Park on Saturday evening in a repeat of last year’s championship semi-final while the reigning Leader Cup and Division 1 league title holders Mullinalaghta are in action against Abbeylara at the Laurels.

Due to the shortened season in the wake of the coronavirus pandemic, the ten senior clubs in Division 1 of the Longford League have been divided into two groups with the eventual top of the table teams contesting the final of this competition.

Thus there are first round byes for St Mary’s Granard in Group 1 and Longford Slashers in Group 2 and they will return to competitive league action over the August Bank Holiday weekend.

There is also a new face in charge of Dromard, Padraig Brady from Mullahoran, but no change at the other seven Division 1 clubs. Thomas Donohoe (Killoe), Noel O’Brien (Slashers), Eugene McCormack (Colmcille), Mickey Harkin (Abbeylara), Finbar O’Reilly (Mullinalaghta), John Rogers (Clonguish) and Ryan Casey (St Mary’s Granard) are all back at the helm.

Two of the 12 senior clubs in the county are operating in the Division 2 League this season and Rathcline (with Kevin Hanley replacing Denis Connerton as the manager) will be heading for the Ballybrien grounds on Saturday evening to take on Ballymore.

Last year’s Intermediate champions Fr Manning Gaels, with Jack Lynn in his second season in charge, begin their league campaign against Killashee at the Mondauff grounds and back for a second stint as the St Brigid’s boss is Ballyleague man Ray Curley.

Ballymahon, beaten Intermediate championship finalists last year, start their league campaign against Ardagh Moydow at Leo Casey Park while the remaining Division 2 fixture is a local derby between Cashel and the 2019 Junior champions Kenagh who clash at Pairc Chiaran.

Sean Connolly’s have received a bye in the first round and thus will not be in competitive action this weekend. The Division 2 league is also divided into two groups with the top teams contesting the final.

The two solely Juniors clubs in the county, Young Grattans and Legan Sarsfields, will meet in the first round of the Division 3 league at the Dunbeggan grounds on Sunday.

All County Football League Division 2 - Round 1

All County Football League Division 3 - Round 1

The GAA has updated match regulations for recommencement of club fixtures.

The key points are: Only 24 players from each club can partake in the matchday and enter the pitch enclosure but there is no limit on the size of a club matchday panel.

A maximum of five (football) & seven (hurling) team officials shall be allowed within the pitch enclosure. These should include a manager, maor foirne, two medics, one administrator and two maor caman (hurling only). Subs and team officials will be positioned on opposite sides of the pitch to allow for Government guidelines.

There should be no use of dugouts, but they may be used provided social distancing procedures are followed. No water carriers will be permitted in either code. One water break will take place between the 15th and 20th minute in each half, at the referee’s discretion.

The referee has the authority during the game to send any person in breach of the regulations to the stand/outside the pitch enclosure and such a person cannot be replaced.

Ground regulations shall apply to all venues considered suitable for club championships. They shall include procedures for entry to each ground, designated areas for substitutes and team officials and shall be communicated to teams in advance.

GAA officials have also advised that the role of the maor foirne is to deliver messages to players on their team.

Any disruption to the playing of the game, challenging the authority of the match officials, interference with opposing players, entry onto the field of play not at a time as listed above or breach of match regulations shall result in their removal from the pitch enclosure and they cannot be replaced for the remainder of the game, including extra-time.

The maor foirne must not be a listed member of the team panel. Meanwhile, selectors must be positioned outside the pitch enclosure.

There will be no handshakes before or after games, no spitting or nose-clearing and team huddles should only take place where social distancing is observed.

Use hand sanitisers before and after every match. Players must use their own clearly marked water bottles and interaction with opponents and match officials should be kept to a minimum after the match.