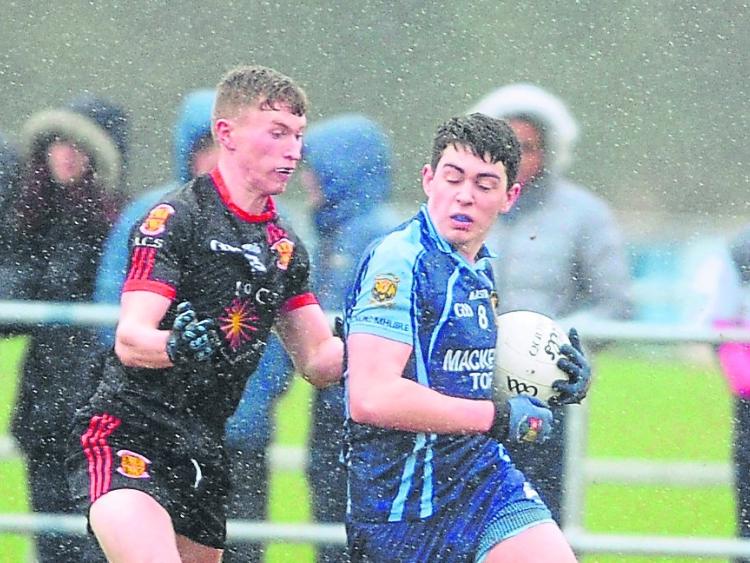 Connor Leonard (Mullinalaghta) on the ball for Cnoc Mhuire Granard against Ashbourne CS in the North Leinster PPS Senior 'B' Football Final back on Monday March 9 Pic: Declan Gilmore

The senior footballers from Cnoc Mhuire Granard were the last local GAA unit to kick a ball back on Monday March 9 before the Coronavirus pandemic shutdown and four months later the north Longford school will be the first team from this part of the country to be back in gaelic games action.

Cnoc Mhuire have enjoyed a lot of success on the football field in recent years, most notably their terrific triumph in the now defunct All-Ireland Vocational Schools Senior Championship back in 2013 when they defeated Tyrone opponents Holy Trinity College, Cookstown by a point (2-13 to 2-12) in a thrilling final at Croke Park.

And the proud Granard school will be chasing more glory at TEG Cusack Park in Mullingar this Friday July 17 when they take on Colaiste Choilm, Tullamore in the Covid-19 delayed Top Oil Leinster Senior ‘B’ Football Championship final, throw-in 1pm.

Managed by Ryan Plunkett from Finea in Westmeath (a teacher in the school) and backboned by a number of talented players from Longford and Cavan, the captain of the Cnoc Mhuire team is Granard clubman Jordan Martin while other key men include Tiarnan Madden (Gowna) and Caolan O’Reilly (Mullahoran).

Late goals from O’Reilly and Micheal Hynes (Granard) clinched a great win over Meath rivals Ashbourne Community School in the North Leinster final before the coronavirus lockdown back in March with just a solitary point (3-7 to 1-12) separating the sides in the finish.

The stage is now set for the overall provincial title decider and while Cnoc Mhuire are facing a tough task in their quest to win this prestigious competition for the first time, Colaiste Choilm have suffered a significant setback with injury ruling out midfielder Harry Plunkett.

The son of former Offaly footballer Mark Plunkett broke his ankle in a recent challenge game narrow defeat against St Joseph’s Rochfortbridge who contest the Leinster Senior ‘A’ final against the defending champions Naas CBS at Bord na Mona O’Connor Park in Tullamore this Friday.

While Harry Plunkett is clearly a big loss, the Tullamore school scored a convincing 4-9 to 3-5 win over the Dublin champions Castleknock Community School in the Leinster semi-final before the lockdown and will be hard beaten.

Only 200 people will be allowed to attend the Leinster Schools Senior ‘B’ football final.

This figure includes players, team mentors, officials, media, stewards and others, meaning that there will approximately 100 tickets available for supporters.

Under the Covid-19 guidelines for lifting of restrictions, only 200 people are allowed to gather for events until further notice. It leaves the competing schools, parents and supporters with a massive dilemma and most people won't be able to attend the games.

Each school has got 40 tickets for the final and it means that both parents of panel members will be unlikely to be able to attend.

While each school will make their own individual decision about how to distribute their tickets, they are likely to be able to give only one to each panel member.

There was some good news for Longford and Cavan GAA fans as the Leinster Final this Friday is to be streamed live and will be available to view on Leinster GAA’s YouTube Page beginning  from 12.45pm.

While the capacity issue is a difficult one, the schools and teams are still glad that these games are going ahead as it looked like there would be no GAA activity until a short few weeks ago.

There will be no All-Ireland series in schools competitions this year as authorities streamline their programmes for the resumption of games.