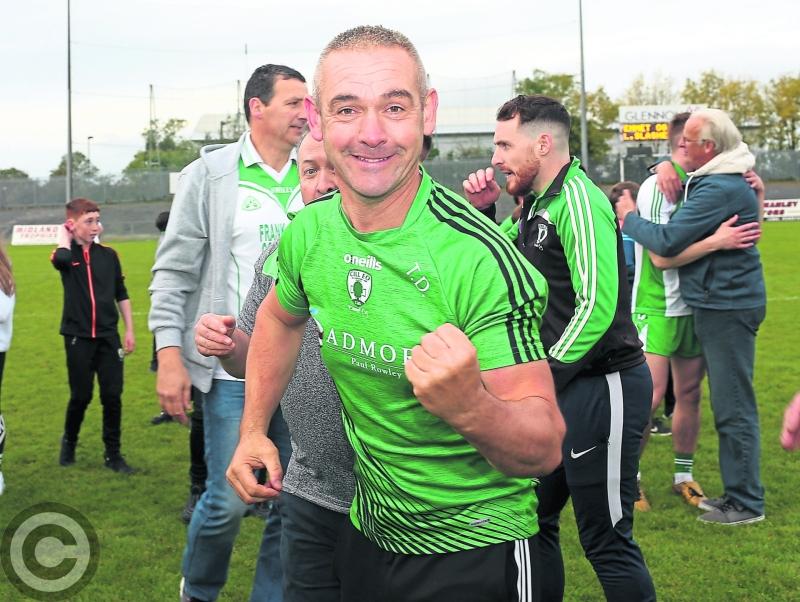 After guiding Killoe to senior championship glory last year in his first season at the helm, Thomas Donohoe must plan the defence of the county title without the McCormack brothers Sean and Padraig.

The Emmet Og manager is dealing with the double blow of the absence of two very influential players for different reasons with the 2019 captain Sean apparently opting to quit gaelic football after serving his club so well down through the years.

The high quality of the McCormack duo will be sorely missed but there is some good news for Killoe boss Donohoe with the return of lethal forward Larry Moran after a lengthy injury absence.

“Larry has recovered from the cruciate injury that has kept him out of action for a long period and that is a big boost for us as the preparations for the 2020 campaign continue.

“At one stage I did not think there would be any football played this year due to the outbreak of the coronavirus pandemic so it is great to be back on the pitch.

“There is great enthusiasm at the training sessions since the resumption and while we are working with a generally young squad there is still plenty of experience in our squad.”

Former Emmet Og defender Donohoe is very familiar with the many talented young players that have come through the excellent underage system in his club as he was the manager of the Killoe minor championship winning squads in 2017 and 2018.

Thus Thomas had no hesitation in giving youth its fling in the group stage of the senior championship last year with Killoe building for a bright future.

Reflecting on the recent draw for the 2020 championship, Donohoe is looking no further than the first round game against Clonguish with Mostrim also pitted in the group.

“It certainly won’t be easy and the first game in the group is massive. While Clonguish have introduced a lot of young players, they still have a few experienced men on their team who know what it takes to win a senior championship title.

“If you lose the first game the pressure is really on and we certainly cannot take anything for granted against Mostrim who are a team with plenty of potential.

“We were fortunate to force a draw against Edgeworthstown in the group stage last year and this ‘banana skin’ is clearly a threat, particularly with the so shrewd Dessie Dolan senior their new manager and the vast coaching experience he brings.”

Looking at the overall picture, the Killoe manager is only too well aware that Mullinalagha are a very strong outfit who will be extremely hard beaten.

“Make no mistake about it, Mullinalaghta are the favourites to regain the county title that slipped from their grasp when they were caught out by Colmcille at the quarter-final stage last year.

“Getting Cian Mackey to play with them this season is obviously a big boost so a lot of the focus will be on St Columba’s with so many fine footballers on their strong team.”