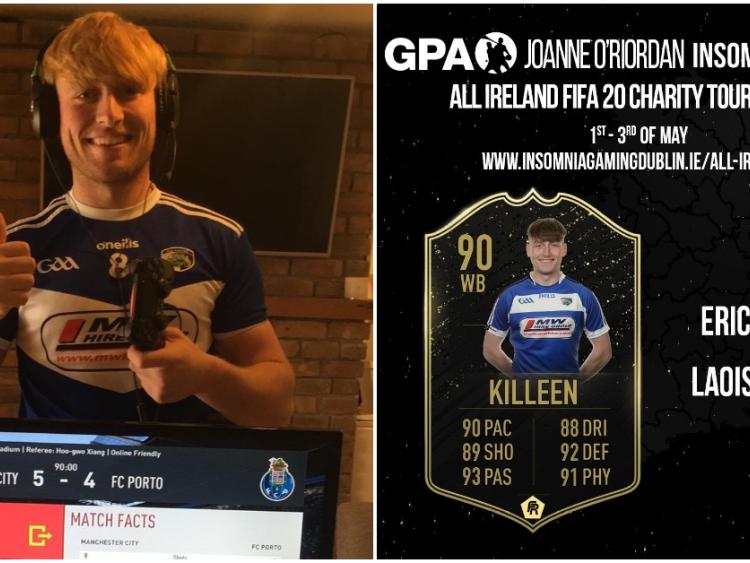 There was no joy for Longford's Daniel Connell as Laois and Rathdowney-Errill hurler Eric Killeen was crowned the All-Ireland FIFA 20 Charity tournament champion over the weekend.

This weekend saw 32 inter-county players representing their county colours in a FIFA20 Charity Online Tournament in aid of HSE and NHS frontline workers across Ireland. Players from across the island took part in provincial tournaments over the weekend with Laois being crowded All-Ireland champions on Sunday.

Killeen teamed up with disability rights activist Joanne O’ Riordan and inter-county players from all over the country to support the heroic efforts of frontline workers during the Covid-19 crisis.

Players from all 32 counties are taking part in the first of its kind All-Ireland FIFA 20 Charity Online Tournament which took place across the May Bank Holiday weekend. All money raised will go to frontline workers in the HSE and NHS across the island.

Throughout the tournament, fans saw classic clashes and GAA rivalries come to the fore with Donegal beating Tyrone in the first round and Cork defeating Kerry in the Munster semi-final. The provincial finals saw Laois’s Eric Kileen, playing as Manchester City, take home the Leinster title against Meath’s Jordan Morris.

Waterford’s  Aaron Jones had a convincing defeat over Cork’s Sean O’Donoghue to claim the Munster title, in the west Sligo’s Niall Feehily just beat Roscommon’s Donie Smith in a 4-3 defeat to become the Connacht champion and Donegal narrowly lost out in the Ulster title with Oisin Gallen losing 2-1 to Antrim’s Patrick McBride.

The semi-finals saw Laois sail through to the final with a 6-2 defeat of Sligo but it went down to the wire between Waterford and Antrim, Aaron Jones winning by 1 goal in the end.

The tournament came to a close with Laois’ Eric Kileen beating Waterford’s Aaron Jones 5-4 in the All-Ireland final which was commentated live by Marty Morrisey.

The FIFA20 All-Ireland Charity tournament, organised by the GPA and journalist Joanne O’Riordan, supported by Trust Gaming, was broadcast on Insomnia Dublin Gaming Festival’s Facebook, with supporters donating over €5,000 via the event’s Go Fund Me page with donations still being accepted.