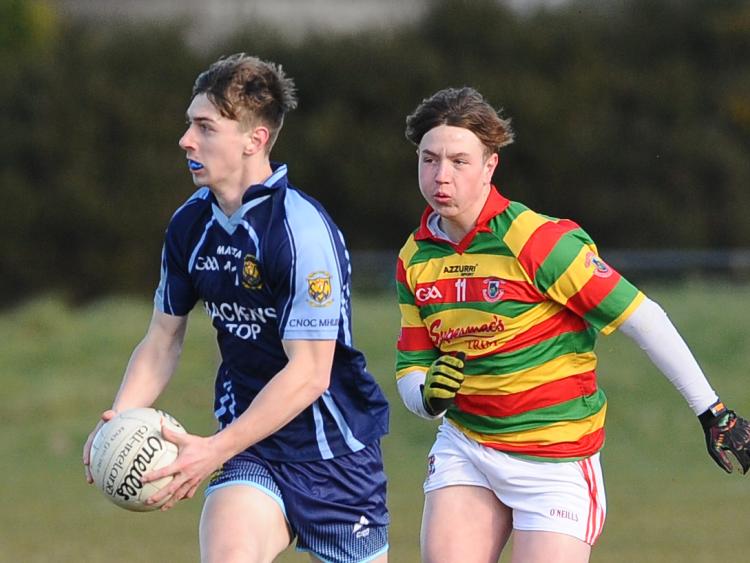 Jordan Martin on the ball for Cnoc Mhuire Granard against Boyne CS, Trim in the North Leinster Senior 'B' Football semi-final on Wednesday Picture: Declan Gilmore

It was all too easy for Cnoc Mhuire Granard as they booked their place in the North Leinster Senior ‘B’ Football Championship Final with a fine win over Trim opponents Boyne Community School (Trim) on Wednesday.

The semi-final clash was played at the Cnoc Mhuire school pitch and the boys are back in action against another Co Meath school Ashbourne in the title decider on Monday next (March 9) at a neutral venue to be confirmed.

The Granard school took the game to Boyne right from the start in what was a very good team performance. They were on top in most areas of the field and their captain Jordan Martin played a leader’s role in an excellent individual display.

The closest Boyne got to Cnoc Mhuire was cutting the gap to four points in the 16th minute after the Granard school had made a good start kicking over five points in a row. They also forced Boyne keeper Peter Brennan into making a fine save to deny Aaron Smyth in the third.

Boyne got their first point in the ninth minute. Dara Sheridan and Tiernan Madden (free) responded for Cnoc Mhuire. The Trim school kicked over two points but the lead was seven points in the 20th minute when Tiernan Madden (two) and Jordan Martin kicked over fine points.

Cnoc Mhuire got their first goal in the 23rd minute; Jordan Martin had his shot blocked but the ball was finished to the net by his Granard clubman Ruairi Corcoran. Boyne hit over two points but a neat Martin point in stoppage time gave Cnoc Mhuire a 1-12 to 0-06 lead at the interval.

Adam Kelly and Micheal Hynes (free) traded points in the early stages of the second half. Cnoc Mhuire increased their lead to 14 points in the 40th minute when Ruairi Corcorcan got his second goal and added on two points.

Boyne replied with points from Mickey Coyle (two), Adam Kelly (free) and Conor Quigley. Cnoc Mhuire manager Ryan Plunkett decided to empty his bench and the changes slotted in seamlessly. Cormac Brady was just one minute of the field when he was set up by Hynes for a point.

Caolan O’Reilly and Martin added on points as Cnoc Mhuire was relentless and clinical. They got their third goal in the 54th minute when substitute Peter Devine brought a save out of Boyne keeper Peter Brennan and Micheal Hynes finished to the net.

Despite being so far behind Boyne tried to keep up with Cnoc Mhuire and got scores. Cnoc Mhuire full-back Cian O’Reilly got up in the 54th minute to fist the ball over the bar. A lovely move in the 57th minute ended with Cnoc Mhuire getting their fourth goal when Hynes fisted Peter Devine’s ball to the net.

Boyne ended the game with four late consolation points but it mattered little.