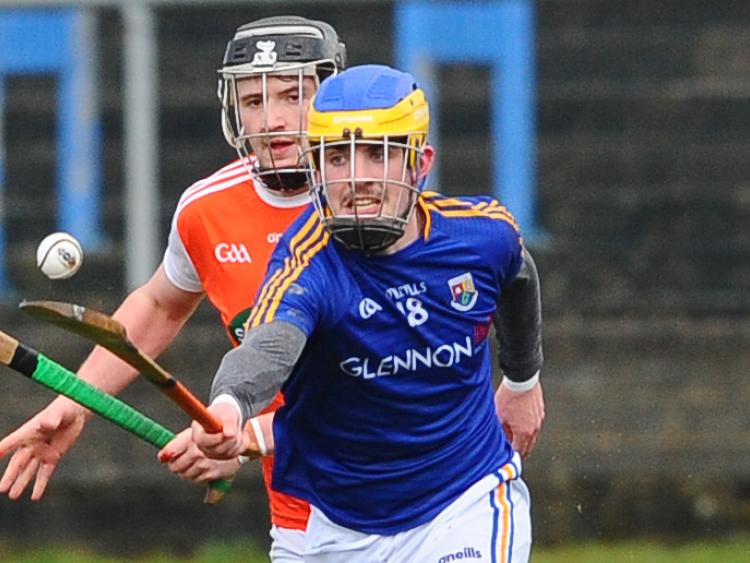 Maitiu O'Donohoe pictured in action for Longford against Armagh in the NHL Division 3A game at Glennon Brothers Pearse Park on Sunday last Picture: Declan Gilmore

A point from Daniel Connell right at the end of the game earned Longford a draw against Armagh in their top of the table clash in the National Hurling League Division 3A played at Glennon Brothers Pearse Park on Sunday last.

It was no more than Longford deserved as they managed to maintain their unbeaten run in the bid to reach the league final. They will feel aggrieved that they didn’t win the game. They had been in front from the 10th minute until the 70th minute when Dean Gaffney hit over a free to put Armagh in front for the first time in the match.

Played in terrible weather conditions both sides deserve great credit for their battling display. In their previous meetings with Armagh, Longford had been comprehensively beaten but on Sunday they were a different proposition. Despite the weather Longford played very good hurling and there were some excellent individual displays.

Longford’s Alan Ward had been a doubt before the game and they were dealt a huge blow in the sixth minute when he had to go off injured. It looks like he will miss Longford’s final two games against Tyrone (away) and Donegal (home).

Definitely out for the crucial clash against Tyrone at Healy Park in Omagh on Sunday (2pm) is David Buckley who was sent-off in the 47th minute after receiving a straight red card in a clash with Armagh opponent Aaron Fox who was also dismissed in this boiling point incident.

A point from Johnny Casey opened the scoring in the 10th minute but Armagh were level two minutes later with a pointed free from Dean Gaffney. The accurate David Buckley then hit over two frees to regain the lead for Longford.

Twice Longford were ahead by two points with Buckley and Paul Barden on target. A point from Dean Gaffney right before half-time saw Longford’s lead cut to the minimum of margins: 0-6 to 0-5.

The lead was two points again in the 37th minute when Aidan Sheridan shot over the bar.  The swirling wind didn’t help the sides and both hit a number of wides. The next score didn’t come until the 46th minute when Nathan Curry fired over a free from his own half.

There was another lull in the game with Longford restoring their two point advantage in the 54th when Cathal Mullane converted an excellent free.

As the clock ticked down Armagh tried hard to get into the game. Dean Gaffney hit over another free in the 57th minute. Seven minutes later the sides were level again for only the second time in the game when Nathan Curry was on target again with another excellent long range free.

Both sides went in search of the score that would edge them in front. In the 70th minute Armagh were in possession when Longford conceded a silly free. Dean Gaffney hit over the resulting free to put Armagh ahead for the first time in the game.

Longford tried hard to get something out of the game and with time running out  Daniel Connell landed a point to level matters. Connell had put in an excellent display so it was no more than he and the home  side deserved.