Longford beat Leitrim in Round 3 of the National Football League 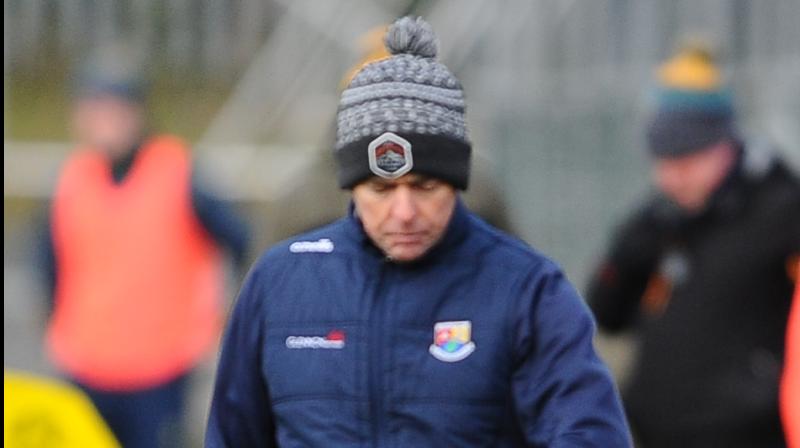 Longford manager Padraic Davis praised his forwards after his side weathered the storm in the first half of the game against Leitrim on Sunday last and turned in a strong second half display to claim their second win of the campaign.

“We came in at half-time and re-grouped. I suppose Leitrim had a lot of joy through the heart of our defence. We had a lot of bodies there but not really applying pressure to make sure they didn’t get through and turn them over. I think we got that sorted in the second half. They struggled and had to go wide with everything.

“We’ve given our defence praise in the past, and rightly so. Today our forward; I think 2-14 in conditions like those was probably one of the highest scores in the country.”

It wasn’t just the score his side put up that Davis was pleased with but the fact they kicked just three wides during the game: “There is an alarming stat of only three wides on a day like that is incredible. We were clinical and took the right options. Our defence deserves a lot of credit for the amount of wides Leitrim kicked. They’ve done well. Offensively our attack today were excellent.”

Longford now have a break before they travel to Newry to face Down on February 22. According to Davis the break has come at the right time for his side.

“We never needed it as much. We needed the game to go ahead today and not next Sunday. Many people wouldn’t know but that’s our 12th game in 13 weeks. As you can see it’s the same bodies we are using all the time; 18/19 guys.

“To stay as clean on the injury front as we have stayed we are delighted with that. These lads badly need a break and they’re going to get it now.”

Longford are now second in the table behind Cork. Davis said: “Overall we are happy where we are at. 5 out of 6 points and it’s onwards and upwards to the Down game now which is Saturday night week.”

From the start of the O’Byrne Cup campaign Davis and his side have taken games in block. After the break they have four games; 2 at home and 2 away. For the Longford boss it’s all about consolidating their position in Division 3 and then go from there.

“They are all hugely significant and important games but we are not going away from the fact that we want to be 100% safe before we start talking about our chances of finishing at the top of the table.

“That’s something we need to do and mathematically we still need points on the board. We’d like to do that as quickly as possible and then see where that takes us.”