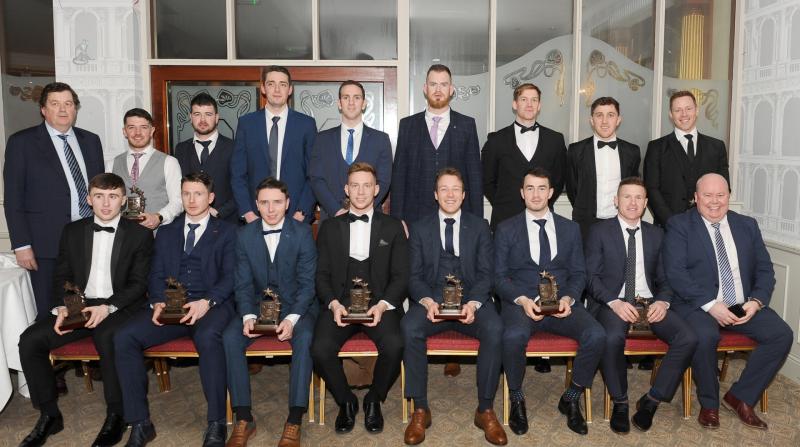 With Longford clipping Dublin’s wings in the penultimate round of the O’Byrne Cup earlier that afternoon, there was a great buzz of excitement and optimism among the 230 guests at the Longford Leader / Longford GAA Team of the Championship and All Star awards presentation dinner in the Longford Arms Hotel on Saturday night.

The identity of the 2019 Players of the Year, as voted for by Longford Leader readers, were revealed by MC Tony Ghee, with Daniel Mimnagh (senior), Pauric Gill (intermediate), Rory Connor (junior) and Jessica Barry (ladies) emerging as winners in their respective text polls.

Accomplished Clonguish dual player Joe O’Brien picked up two trophies, one for his selection on the 2018 Football Team of the Championship and the other as 2019 Hurler of the Year.

Mullinalaghta St Columba’s, the 2018 AIB Leinster club kingpins, unsurprisingly, dominated that year’s team of the championship with eleven of the fifteen places on offer going to the men of the ‘Half Parish’.

The 2018 Hall of Fame inductee was the hugely popular Seamus Flynn, a star of Longford’s NFL and Leinster Final victories of 1966 and 1968, respectively. He also had the honour of captaining Leinster in the Railway Cup and won many county medals with Clonguish.

There was a poignant moment as Linda McGee accepted the 2019 Hall of Fame award on behalf of her late dad, Eugene, former Longford Leader Managing Editor, renowned author, All-Ireland club and inter-county winning manager, who was honoured posthumously.

Awards organiser Micheál Carrigy thanked the Longford Leader for their promotion of the event since it began 14 years ago and he said everyone’s thoughts were with Leader Sports Editor Padraic O’Brien, his brother Benny and their family at this difficult time.  He thanked guests for supporting the raffle in aid of St Christopher’s Services.

2019 senior player of the year Daniel Mimnagh reflected on their memorable campaign and he expressed sympathy with team manager Thomas Donohue following the death of his father.

Fresh from Longford’s win over Dublin, Michael Quinn, one of seven Killoe players on the 2019 Team of the Championship, expressed satisfaction with the performance and said the panel were looking forward to the final against Offaly the following Saturday.

The triumphant Longford hurling sides of 2018 (defeated Wicklow in Kehoe Cup Final) and ‘19 (defeated Sligo in Division 3B Final) were also presented with their medals, with manager Derek Frehill pointing out that his players were well-positioned to challenge for further silverware in the year ahead.