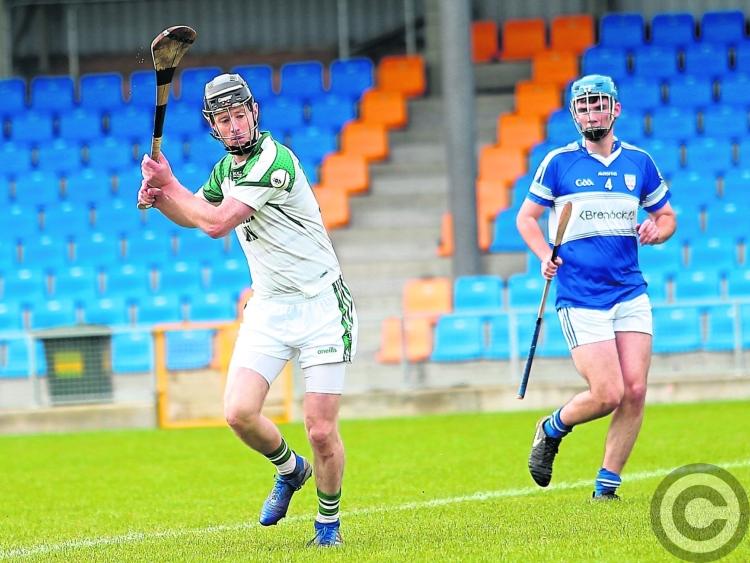 Clonguish Gaels shooting star Joe O'Brien, who was the unanimous choice as the winner of the 2019 Senior Hurling of the Year Award as voted by the readers of the Longford Leader

From the moment Colmcille scored a shock win over the three-in-a-row champions Mullinlaghta at the quarter-final stage, the race for the 2019 county senior title was thrown wide open and it was Killoe who made the most of the opportunity to claim the coveted Connolly Cup.

With a home grown manager in former player Thomas Donohoe, Emmet Og emerged victorious and their return to the summit of Longford club football was reflected in the voting process for the 2019 Team of the Championship.

The magnificent seven Emmet Og players honoured are Padraig McCormack, Cian Farrelly (versatile in both defence and attack) Michael Quinn, Simon Kiernan, Sean McCormack, Daniel Mimnagh and Ronan McGoldrick who will be the recipients of Longford GAA All-Star Awards at the Gala Presentation Dinner in the Arms Hotel on Saturday night week,  11 January.

There is some more good news for Killoe as two of their most influential players, the excellent pair of Padraig McCormack and Daniel Mimnagh, have been nominated for the 2019 County Senior Football Championship Player of the Year with Gerard Flynn (Longford Slashers) also on the shortlist for the top individual award.

Reaching the county final for the first time since they last won the title back in 2013 was a fine achievement for the generally young Slashers side and they almost regained the Connolly Cup in losing out by just a single point against Emmet Og in the decider.

The impressive Gerard Flynn and four other Slashers men feature on the 2019 Team of the Championship selection,  notably Dermot Brady, Sean Clarke, Andrew Dalton and goalkeeper Colm Farrell who were all recognised for the big impact they made in the Connolly Cup last season.

Vastly experienced defender Brady has won several Longford GAA All Star Awards since the scheme was first introduced back in 2006, such is his consistently solid performances in making it extremely difficult for opposing forwards.

Completing the 2019 Team of the Championship are Colmcille trio Barry McKeon, Cathal McCabe and Fergal Sheridan.

McKeon was particularly outstanding in the sensational win over Mullinalaghta in the last eight, clocking up a total of 1-7 with the crucial goal coming from a penalty deep into stoppage time.

McCabe was a constant threat in the Colmcille full-forward-line throughout the championship campaign.

Just like Simon Kiernan for Killoe, Fergal Sheridan was a real tower of strength at centrefield for Colmcille in their exciting championship run which ended at the semi-final stage with Ronan McGoldrick inflicting most of the damage in scoring 2-3 for the eventual county champions.

Nominated in the 2019 Intermediate Player of the Year category are key Fr Manning Gaels players Martin Cassidy and Pauric Gill, who clocked up most of the scores in the championship success for the Drumlish/Ballinamuck outfit, while also on the shortlist for this award is Kevin Diffley who produced powerful performances at midfield throughout the Gerry Hennessy Cup campaign for the beaten finalists Ballymahon.

Kenagh, winners of the Junior Championship title for the first time since 1976, dominated the voting process in this category with three of their main men - Rory Connor, Shane Doyle and Thomas McGann  - nominated for the 2019 Junior Player of the Year award.

Jessica Barry (Longford Slashers), Caoimhe Lohan (Grattans) and Michelle Farrell (Colmcille) are the nominees for the Ladies Player of the Year Award with their clubs winning the county senior, intermediate and junior championship titles respectively.

All three were recipients of the player of the match awards in those finals with Jessica (daughter of former Longford star Dessie Barry) scoring 2-5 as Slashers won the ladies senior championship for the first time since 1982.

Caoimhe Lohan produced a commanding display in the Intermediate final as Grattans captured  this title for a historic first time.

Michelle Farrell, a leading light on the Longford ladies team, showed her class in clocking up the magnificent total of 3-9 for Colmcille in their Junior success.

Joe O’Brien is chosen as the unanimous winner of the 2019 senior hurling player of the year and he was in outstanding form for Clonguish Gaels this year.

His club were crowned Longford senior hurling champions for the first time since 2012 and man of the match award winner O’Brien clocked up the impressive total of 12 points in the comprehensive county final win over Slashers.

Joe carried that impressive form into the Leinster Club Junior Championship, shooting 4-5 and 2-8 in the wins over Barndarrig (Wicklow) and Mountmellick (Laois) respectively and scored  six points in the defeat against the Kilkenny junior representatives Conahy Shamrocks in the semi-final.

O’Brien ended up as the top scorer (6-19) in the Leinster Junior Championship (which was won by Conahy) and the dual player will receive a couple of Longford GAA All Star Awards at the forthcoming function. Joe was selected on the 2018 Team of the Championship after registering the tremendous total of 2-37 for the Clonguish footballers in the Connolly Cup that year.

Voting has begun  for the other four 2019 Players of the Year. Longford Leader readers are invited to text vote their preferred player for the coveted individual awards which will be announced at the Gala Awards Night in the Arms Hotel on Saturday 11 January.

At the same function the Longford senior hurlers will receive their medals for winning the 2019 National League Division 3B title, along with the presentation of the awards to the 2018 Longford GAA All Stars, and it promises to be a fantastic occasion.

For Tickets information contact the event organiser Michael Carrigy on 087-2915072.

Tickets for the 2018/2019 Longford GAA All Stars Awards Night in the Longford Arms Hotel on Saturday 11 January are available from Michael Carrigy, 087-2915072.

12 players have been selected by the readers of the Longford Leader for the 2019 Players of the Year in four categories.

The next stage of the selection process is asking members of the public to vote for their preferred choices in Senior, Intermediate and Junior Football along with the Ladies Football Player of the Year.

Each text cost one euro and the text lines will remain open until 4pm on Friday 10 January. The winners of the four categories will remain a closely guarded secret until the Gala Awards event in the Longford Arms Hotel on Saturday 11 January.

Text ICONIC followed by your selection (name of player) to 57199. Lines close on Friday 10 January at 4pm.

Texts cost 1 euro plus standard network charges. SP Sremium 0818220818. Lines close at 4pm on Friday 10 January. Entries made after the close date will not count and you may be charged.