New County Board Chairperson looks to the future 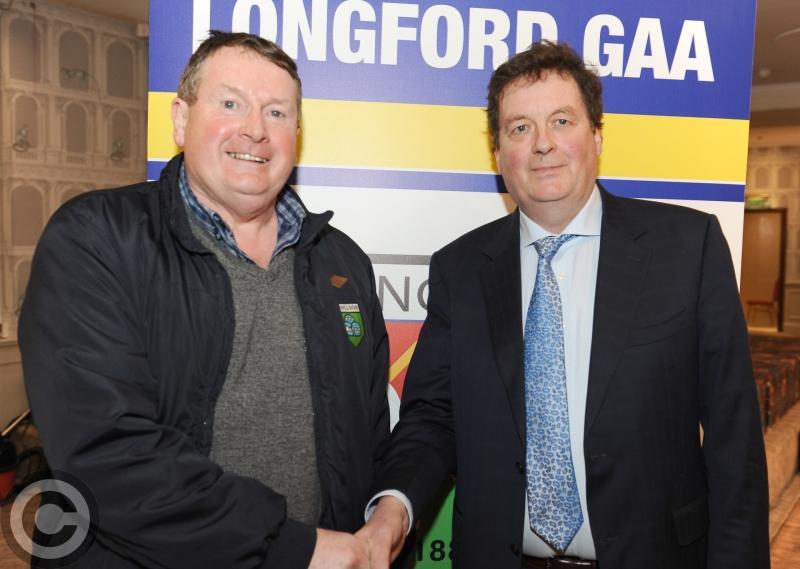 New Longford GAA Chairman Albert Cooney has lots of hopes and aspirations in what he termed “a new beginning for Longford.”

The Rathcline clubman was elected Chairperson at the Longford GAA Convention on Thursday night last in the Arms Hotel, defeating Killoe’s Brid McGoldrick in the contest for the top position.

Off the field matters have tormented Longford GAA this year and for Cooney it’s time to start afresh.

“We’ve had a number of issues this year. I’m drawing a line under everything. This is a new beginning for Longford. I want everybody to forget about the past. You learn from the past and you have to think about the future.”

Cooney spoke of his delight in being elected. He is the second Rathcline clubman to command the role of chairman after Brendan Gilmore.

“It’s a huge honour for my family, my club and it is something that I never dreamed I could achieve. It was never on one of my ‘to do lists’.

“I landed in the position of Treasurer five years ago and I didn’t have a plan for being Chairman but as events unfolded I took the opportunity when it arose.”

Albert said  he had the full backing of his family; wife Carolyn and children Carol and Gavin.

“It was a family decision. I discussed it with my wife and she had reservations at the beginning. But she probably seen it as an opportunity I was never going to get again so I had her full support. The end result is good.”

One of Cooney’s hopes for Longford during his tenure of chairman is that they reach a Leinster Senior Final. He has belief in Padraic Davis and his team.

“My aspiration is a Leinster Final for Longford. In 1968 we won our first and only Leinster title. We have celebrated many times since and it’s about time we had another final appearance to celebrate.

“I have huge belief in the current senior football management team. I have worked with the county seniors over the last five years as Liaison Officer alongside my role as Treasurer. We can really achieve something. It’s a really young team with plenty of promise.”

One of the things that Cooney will oversee as chairman is the new initiative ‘Club Longford’.

The scheme was launched at the Convention on Thursday night.

“While we have a deficit this year we had recognised that fact at the beginning of the year when we submitted our annual budgets to Croke Park.

“We had estimated that we would need an additional €120,000 of income. That was the seed that was sown and we now have Club Longford. We have planned that it will generate about €150,000 income over the next 12 months.”

On the field of play at local level Cooney is aware of the struggles that clubs are experiencing with numbers falling.

“We are a very proud footballing county. We have always punched above our weight; both at administration level and on the playing pitch.

“We have only a population of 30,000 and 21 clubs. Some of them are struggling at the moment but with the help of the county board they will survive.”

For Cooney it’s all about getting participation numbers up and that for him starts with the Primary Schools.

“In general, football is very healthy in the county. We have a huge challenge; there are fallen numbers. We need to get into schools and make sure everyone gets involved in football.

“We need to build on the Cul Camp template and bring it into the schools and get kids interested in football and hurling. The GAA need to start investing for sustainability for the whole organisation going forward,” commented Cooney.