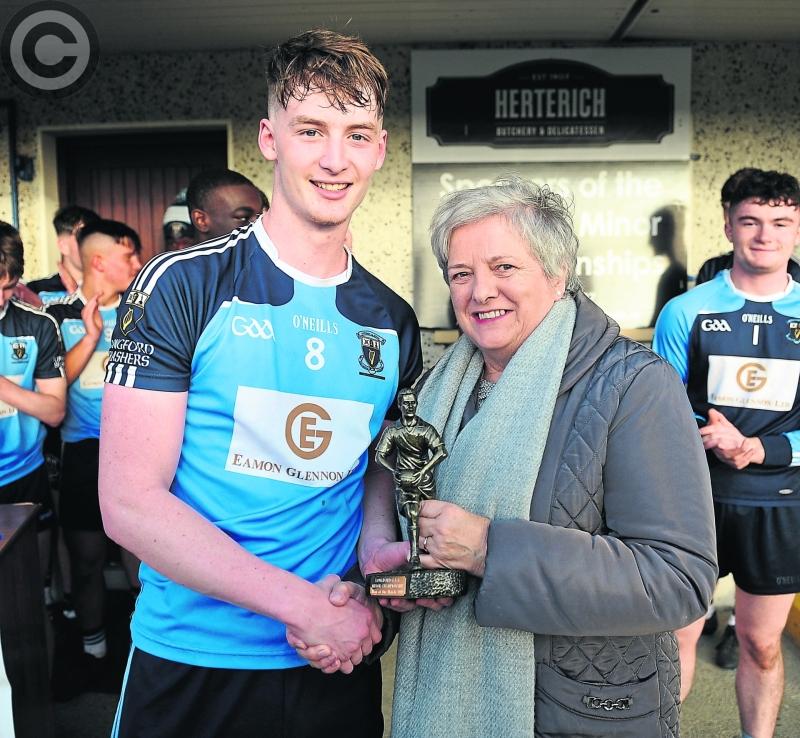 It was a dramatic finish to a highly entertaining county U-18 final that looking to be going the way of the Colmcille/Dromard/Ballymore amalgamation when Aaron Darcy registered a  well-taken goal midway through the second half to leave his side leading by 2-8 to 1-8.

But St Colmcille’s/St Francis failed to register another score during the remainder of this very exciting match and Slashers refused to panic even when Darragh O’Connell had a penalty well saved by the opposing keeper Ollie Duffy in the 52nd minute.

McNevin produced a powerful performance at midfield in the second half to swing the issue in favour of Slashers with centre-half-forward Darragh O’Connell also in excellent form for the new county minor champions.

O’Connell and McNevin scored eight points between them while the main man for the gallant losers was corner-forward Jack Macken who clocked up a total of six points.

Macken opened the scoring in the first minute but Slashers hit back with a goal from Dean Coughlan who finished the ball to the net in the fourth minute after St Colmcille’s/St Francis keeper Ollie Duffy had stopped a point-blank shot from Rory Lennon.

Soon after Slashers netminder Stephen O’Brien made a brilliant save to prevent Conor McGauran scoring a goal for the amalgamation.

But St Colmcille’s/St Francis eventually found a way past O’Brien in the 29th minute with midfielder McGauran blasting an unstoppable shot to the roof of the net to leave his side leading by 1-7 to 1-5 at the break.

Jack Macken ended up shooting five points (two frees) in the first half with Aaron Farrell and Aaron Darcy also on target while three of the Slashers points came from Darragh O’Connell (two frees).

Tadhg McNevin and Dean Coughlan also shot over the bar to leave it very tight going into the second half before St Colmcille’s/St Francis extended their advantage with a great score from Macken immediately on the changeover.

Slashers battled back to close the gap with a point apiece from McNevin and Ronan Sheahan, the latter clipping the crossbar with his shot, but the sky-blues had a lucky let-off when Ben Brady flicked the ball narrowly wide from a goal attempt in the 38th minute.

There was then a lucky escape for St Colmcille’s/St Francis when Dean Coughlan was just off target in going close to getting a second goal for Slashers before an excellent point from Darragh O’Connell left the side level (1-8 to 1-8) in the 43rd minute.

Moments later Aaron Darcy got the second goal for the amalgamation and that was really putting it up to the town side but the title favourites came storming back with a couple of points in quick succession from O’Connell and Ronan Sheahan.

St Colmcille’s/St Francis squandered a couple of great chances to regain the lead late in the game and a replay was looking the likely outcome before Tadhg McNevin struck to score a wonderful winning point for Longford Slashers.

The long wait is over, 18 years to be precise, and great credit to the management team of Jerry Sheahan, Conor Clarke, Shaun Cunningham and Peter Sheahan for guiding Slashers to a most significant minor success.