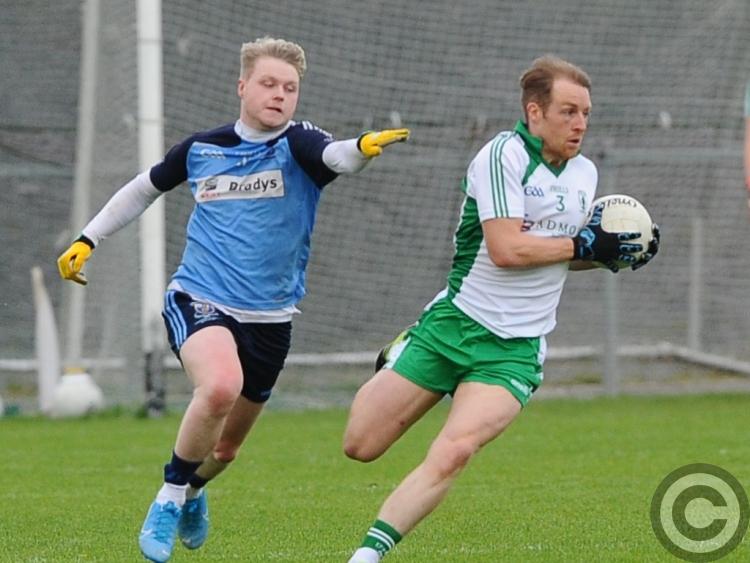 A last gasp fisted point from Ronan McGoldrick in the fourth minute of stoppage time won the Senior Football Championship title for Killoe  in a dramatic finish to the county final at Glennon Brothers Pearse Park on Sunday last.

It was looking like a replay when Andrew Kelly fired over a free to put Slashers back on level terms moments earlier but Emmet Og launched an immediate counter attack with man of the match Daniel Mimnagh putting McGoldrick through for the winning score.

It was very hard luck on Slashers who managed to remain in contention thanks to a succession of converted frees but they were eventually pipped at the post with Killoe winning the county SFC title for the 12th time in their proud history.

Mimnagh was marvellous for Emmet Og, firing over three points in the process of making a major impact as his club were crowned champions for the fourth time this decade after also capturing the coveted Connolly Cup in 2012, 2014 and 2015.

Killoe can now look forward to a return to Leinster Club action with the first round game away against the Westmeath champions St Loman’s Mullingar or Garrycastle Athlone at Cusack Park on Sunday 27 October.

While it must be said that Emmet Og deserved to triumph on the basis that ten of their points came from play as compared to just two for Slashers, a draw would probably have been a fair result in a lethargic game that never reached any great heights.

Inspired by the rock solid Padraig McCormack in the heart of the defence with Liam Hughes also much to the fore, Killoe restricted the Slashers attack to limited scoring chances throughout the title decider watched by the attendance in the region of 3,500.

As it turned out Slashers only succeeded in scoring four points in the first half, three from frees converted by Andrew Kelly (2) and Robbie Clarke.

Clarke was on target from play when he blasted the ball over the bar in the 21st minute and while the sky blues were unfortunate to hit the upright twice, Daniel Mimnagh missed a clear-cut chance of a goal for Killoe.

Mimnagh, using his quick pace to fine effect, raced through in the 25th minute but shot narrowly wide when looking set to finish the ball to the net.

Slashers had another lucky escape in the 12th minute when a shot from prominent midfielder Simon Kiernan was deflected out for a ‘45 while Cian Farrelly struck a shot against the upright in his attempt to score a point in the early stages of the game.

Mark Hughes got the first score in the final with six minutes gone on the clock when he fisted the ball over the bar while Slashers opened their account a couple of minutes later when Andrew Kelly fired over a free.

A brace of well struck points (play and free) followed from Sean McCormack but Slashers hit back to take the lead with three scores in a row through Robbie Clarke (2) and Andrew Kelly.

Killoe produced a strong finish to the first half with excellent points from Daniel Mimnagh and Simon Kiernan to hold a slender advantage at the break, 0-5 to 0-4.

And Emmet Og carried that momentum into the second half with early scores from Ronan McGoldrick and Daniel Mimnagh and looked like they were going to establish a tight grip on the game.

Slashers replied with a badly needed score in the 36th minute from Peter Foy who was working extremely hard to make his presence felt but moments later Killoe restored their three point lead when Denis McGoldrick shot over the bar.

But resolute Slashers refused to buckle and a brace of points in quick succession from goalkeeper Colm Farrell (well struck ‘45) and attacker Robbie Clarke closed the gap to the minimum of margins, 0-8 to 0-7.

Killoe were on target again in the 45th minute with the fairly influential  Cian Farrelly landing a fine point and then Slashers defender Barry Gilleran got in a timely tackle in front of the posts to prevent Ronan McGoldrick from creating a goal chance.

The ding-dong battle continued with a point apiece from Andrew Kelly (free) and Sean McCormack, the latter intercepting a wayward kick out to shoot his third score in the 53rd minute.

Slashers battled back to level matters with further scores from frees converted by Kelly and Colm Farrell (a great kick from near the sideline in the 57th minute) but the issue swung back in favour of Killoe when Daniel Mimnagh surged forward to slot the ball over the bar in the first minute of stoppage time.

This vital score was the direct result of what appeared to be a harsh free awarded against Gerard Flynn but Slashers never say die spirit yielded the equalising score from Andrew Kelly.

Kelly slotted over a close range free following a foul on Robbie Clarke who latched on to a terrific pass from substitute Daire O’Brien in the third minute of stoppage time.

Clarke was completely unmarked and while a goal was a possibility he was stopped in his tracks and the free was awarded for Kelly to leave it level yet again with a final replay looming.

But Killoe won possession from the subsequent kick-out and called on all their vast experience to engineer a very well worked move that put Ronan McGoldrick through for the winning point, much to the sheer dismay of the gallant Slashers side.