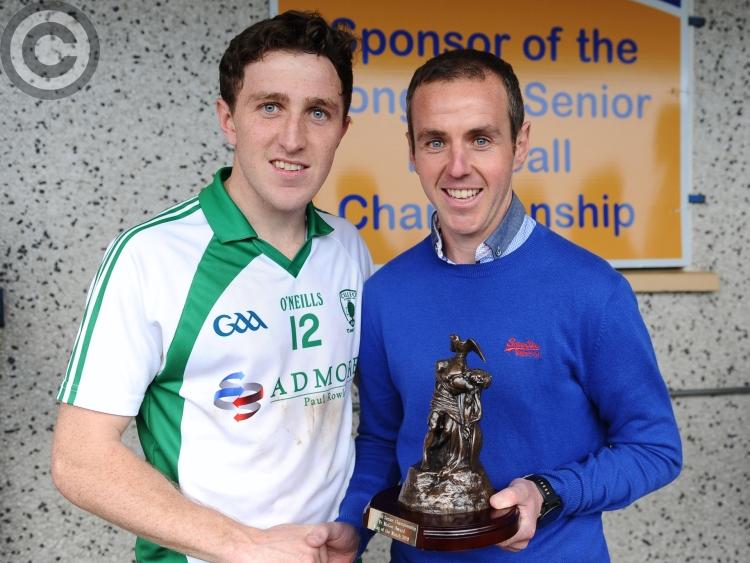 Man of the Match Daniel Mimnagh was quick to praise beaten finalists Longford Slashers for the part they played in Sunday’s game. Killoe have great respect for Slashers and knew they would provide a stiff test.

Mimnagh said: “From the start a lot of people wrote Slashers off. On the field and off the field we had a lot of respect for them and didn’t write them off.

“We took them for what they are; they earned their right to be here. It went down to the wire. It could’ve went either way. The two teams made it so tough. Thank God we got over the line in the end.”

Thomas Donohoe was the man that led Killoe to their 12th county title but Mimnagh also wanted to mention former manager Fergal O’Donnell for the work he put in with the team.

Daniel said: “You can’t write off the work that went on over the last two years with Fergal O’Donnell. With Tommy (Donohoe) everything has been so simple.

Mimnagh scored three points and also set Ronan McGoldrick up for the winning score in the final seconds of the game. It was words from Cian Farrelly that made Mimnagh get into the position to set McGoldrick up.

“I thought, I have to take off, it’s all or nothing. Ronan just peeled off his man very smartly, no panic, fist over the bar. Cool as you like. That’s why we are where we are.”

When Killoe won the senior championship title in 2014 Mimnagh received the man of the match accolade. He is one that doesn’t like the limelight and is modest.

He said: “I really don’t like to take credit. It’s 15 men plus the players that come on. It’s a 20 man/30 man team. This is just a token. I’m delighted we got over the line. We have Sean (Connolly) going back over the bridge.”

At the start of the year Killoe were without a number of players and that continued into the championship with the younger panel members getting their chance to play. They made a huge impression.

“At the start of the group stages we were without a few of our players; myself included. The young lads are the ones that got us through. Boys that didn’t get on today; James Moran played outstanding in the last few games, Evan Farrelly too. The young lads mixed with the experience helps. It makes for a good team spirit.”

Although it was only four years since Killoe last won the championship title, Mimnagh admitted that in the recent past he did wonder if they’d get a chance to win the Connolly Cup again.

“You do think as time goes on, you think it might not happen. We believe in ourselves and believe in our system and team. Thank God this was our day.”