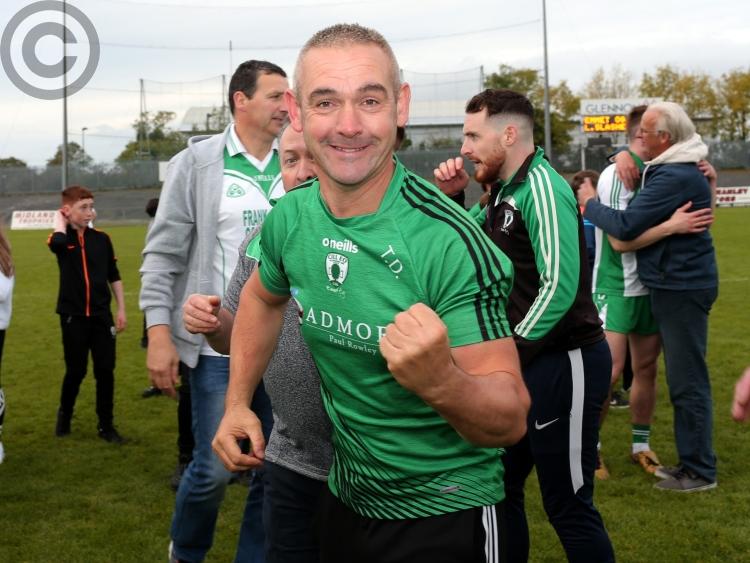 Killoe Emmet Og manager Tommy Donohoe completed his very own ‘treble’ on Sunday as his side claimed the Connolly Cup. Donohoe had won the championship as a player and selector and on Sunday he won it as a manager.

“Maybe I should stop now when it’s going so well,” he joked. “It’s just brilliant for the lads to get across the line. It was looking like a draw at one stage near the end and we probably might have taken a draw but the boys just worked really hard to get the ball up the pitch and fist it over the bar.

It probably wasn’t the best game we have played but it was enough to win a final; sometimes that can happen in finals too. Where you don’t play your best football but you get across the line.”

When Andrew Kelly pointed a free to leave Slashers level in the third minute of stoppage time Donohoe thought he would be back on Saturday evening for a replay.

“I would have taken it at one stage. When you get the win you take it with your two hands. When the ball went over the bar we knew he was going to blow the whistle. It was a quick kick-out from Shane Fitzpatrick to Liam Hughes and he got it going again.”

Over the past few years many felt Killoe would challenge Mullinalaghta for the county title but they failed to show their true potential. This year there was no real expectations but Donohoe believed in his side.

“We came under the radar a little bit. There wasn’t much about us. The players were always there, we had the quality. I didn’t want to get too carried away.

“I knew if we got things right we would be in the chase for the title. We worked really hard this year. We went back to the basics and got lads who were committed to play with Killoe. That’s what happened and the result proved that.”

It was a journey that started on a wet evening in Ballymahon back in July with a win over Carrickedmond and ended on Sunday with them claiming the biggest prize in Longford club football.  For Donohoe that win was so important for their progress.

“We brought Daniel Mimnagh home from America for the Carrickedmond game and all of a sudden he pulled his thigh muscle.

“Five minutes into the game we lost Ronan McGoldrick and then we ended up with so many young lads on the pitch.

“Looking back on the championship, the team we had out that day was probably our best performance. I always said the longer we stayed in the championship the stronger we were going to get as a team.”