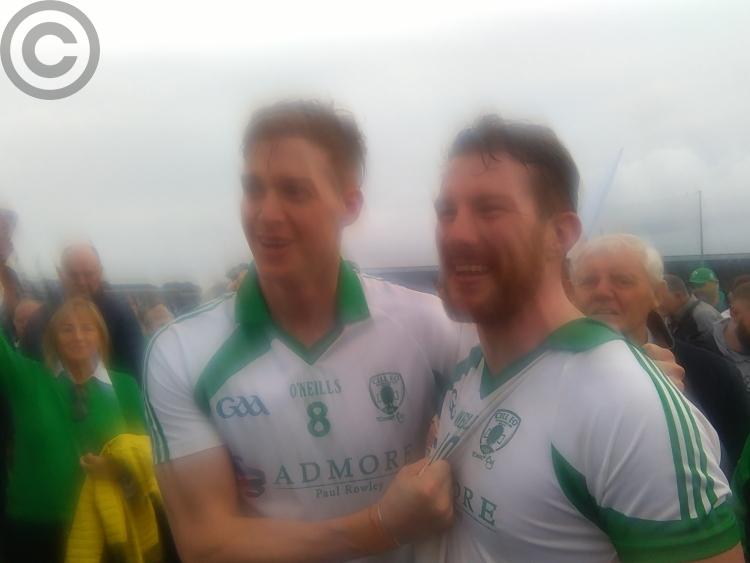 Title delight . . . Ronan McGoldrick (left) who scored the winning point for Killoe Emmet Og is pictured with his brother Denis following the victory over Longford Slashers in the SFC final on Sunday.

A last gasp fisted point from Ronan McGoldrick in the fourth minute of stoppage time won the Senior Football Championship title for Killoe  in a dramatic finish to the county final at Glennon Brothers Pearse Park on Sunday.

It was looking like a replay when Andrew Kelly fired over a free to put Slashers back on level terms moments earlier but Emmet Og launched an immediate counter attack with man of the match Daniel Mimnagh putting McGoldrick through for the winning score.

It was very hard luck on Slashers who managed to remain in contention thanks to a succession of converted frees but they were eventually pipped at the post with Killoe winning the county SFC title for the 12th time in their proud history.

Mimnagh was marvellous for Emmet Og, firing over three points in the process of making a major impact as his club were crowned champions for the fourth time this decade after also capturing the coveted Connolly Cup in 2012, 2014 and 2015.

Killoe, managed by former Emmet Og player Thomas Donohoe, can now look forward to a return to Leinster Club action with the first round game away against the Westmeath champions St Loman’s Mullingar or Garrycastle Athlone at Cusack Park on Sunday 27 October.