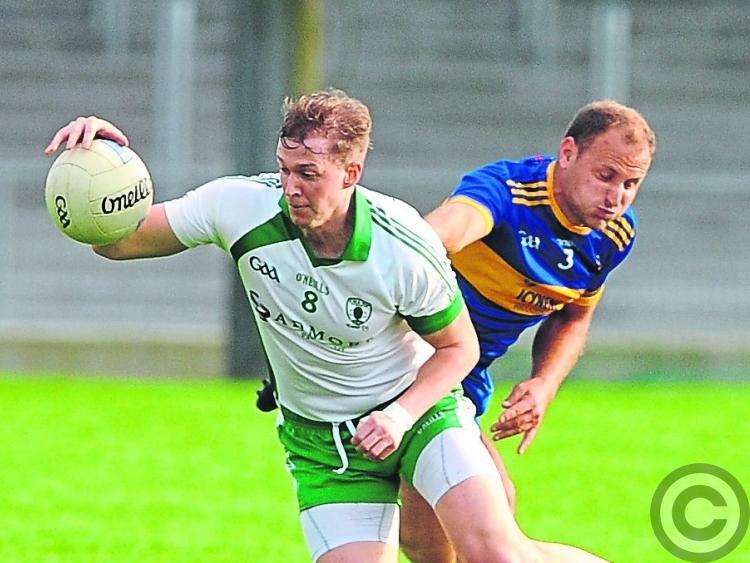 Ronan McGoldrick on the attack for Killoe in evading the challenge of Dromard defender Niall Vance. Action from the SFC quarter-final at the end of August. Picture: Declan Gilmore

Since their last senior championship success in 2015 Killoe have failed to reach the county final, that is until this year. Ronan McGoldrick said identifying what had gone wrong over the last number of years was a priority and hard work has helped change the fortunes.

“At the start of this year we had a long, hard look at ourselves and why did we not get to the final in the last few years. We knew we were falling short but admitting it is the first step to a degree.

“We knew we had to do better in certain areas and we identified them. The boys have worked really hard this year to get back and we are delighted with it,” stated McGoldrick.

When the draw was made for the group stage of the championship Killoe just focused on getting out of the group and were well aware of the threat that the other three teams would pose.

Ronan said: “Abbeylara were beaten in the last four county finals, Carrickedmond were doing well in the league this season and Mostrim were difficult opponents in recent years.

“We certainly didn’t take those teams lightly. I know it’s an old cliche but we were only thinking of the next game. That was literally it. We knew we had to put focus on the group stage. If we built a bit of momentum there then everything else would look after itself.”

“When you lose you think everything is wrong and it’s not. When you win you probably put emphasis on things that you have done differently. It’s not down to that.

“We always had a huge work-rate, we always really applied ourselves on and off the field and I suppose what’s different this year is our focus was always just on the next game. Our biggest emphasis was to produce a good performance and so far we’ve been able to do that,” commented McGoldrick.

With Mullinalaghta completing a three-in-a-row last year and going in as Leinster club champions this season the attention was very much on the north Longford side. There wasn’t too much pressure on Killoe or was there?

McGoldrick said:  “I think some of the games this year I have been as nervous as I’ve been for any game in my career. I don’t know if it is pressure. I think we always have a bit of expectation on ourselves. I suppose we just wanted to perform. We wanted to do ourselves justice. We have an immensely talented group and we want to do our best. Unfortunately we hadn’t been doing that for a while.”

Looking ahead to Sunday’s big match McGoldrick joked about something he saw on social media. “I saw a few things on twitter. People were saying “the boom is back” with Killoe and Slashers in a County final.”