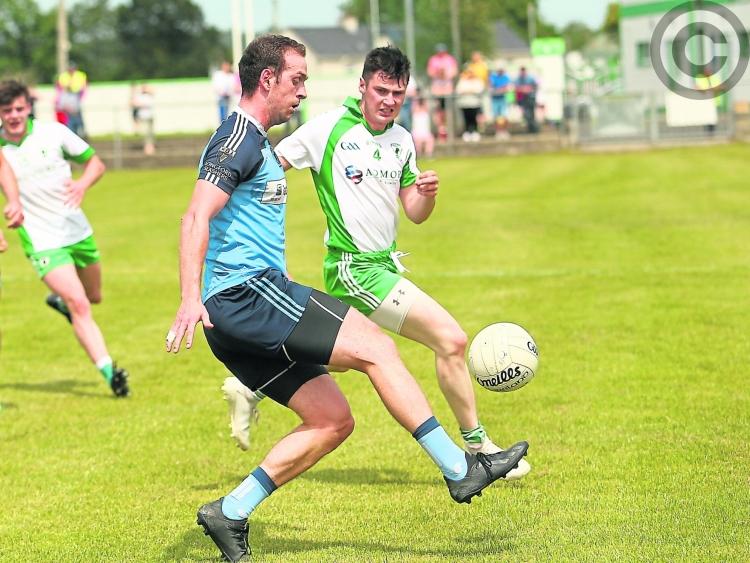 Andrew Dalton on the ball for Slashers ahead of Killoe defender Gavin Hughes. Action from the Division 1 Football League game at Emmet Park back in July. Picture: Syl Healy

In Andrew Dalton’s first two years playing senior football with Longford Slashers the club reached the county final; losing to Killoe in 2012 but beating Dromard to claim the title in 2013.

Dalton never thought he would have to wait so long for another county final appearance.

“I remember we were a bit spoiled. A couple of us came through at the same time and in our first two years we were in county finals. We had a really experienced team back then.

“You get fooled into thinking it will always be like that. The past six years have been tough going; there is only a kick of a ball between five or six teams in Longford and if you take your foot off the pedal, at all, you find yourself out at the quarter-final or the group stage.”

Over the last number of years Slashers have had the talent but haven’t made any great progress in the championship, that is until now. Under new manager Noel O’Brien, Andrew said that Slashers now have belief in their ability.

“The main thing that Noel has brought is belief. He simplifies things as well.

“ In Slashers terms you can sometimes think of winning championships where with Noel he will peel that back to winning the game that is in front of us. Taking it game by game and the strategy begins to work.”

Dalton was also quick to praise the other members of O’Brien’s management team and what they have brought to the set-up.

“What Noel and Sean (Hynes) have brought this year is hard work. Eoin Devine is in the training set-up as well.

“We are a very committed  team. When you look at the late periods of games we are finishing strong and that hard work and mentality has served us well so far.”

Killoe stand in the way of Dalton winning his second senior championship medal and Slashers being crowned champions for the 17th time. The midfielder loves the ‘friendly’ rivalry between the two clubs.

“I always put Killoe as our main rivals partly because we played with so many of them in school as Slashers and Killoe players made up the bulk of St Mel’s College teams. When you go beyond that into senior club and suddenly you are on opposite sides it makes for good rivalry. It’s like Abbeylara, Mullinalaghta and Granard.”

2019 has been a good year so far for Slashers with the ladies winning the Senior title and the footballers and hurlers both reaching their respective county finals.

Dalton said that the Ladies success last year and the dinner dance that followed did whet the senior players’ appetite for success of their own.

“I remember from our club dinner dance last year there was a buzz after the Ladies winning the Intermediate title.

“We hadn’t had a dinner dance like that in a while. It was infectious and we wanted it to continue. So far so good this year and we are enjoying the exciting build up to the county final.”