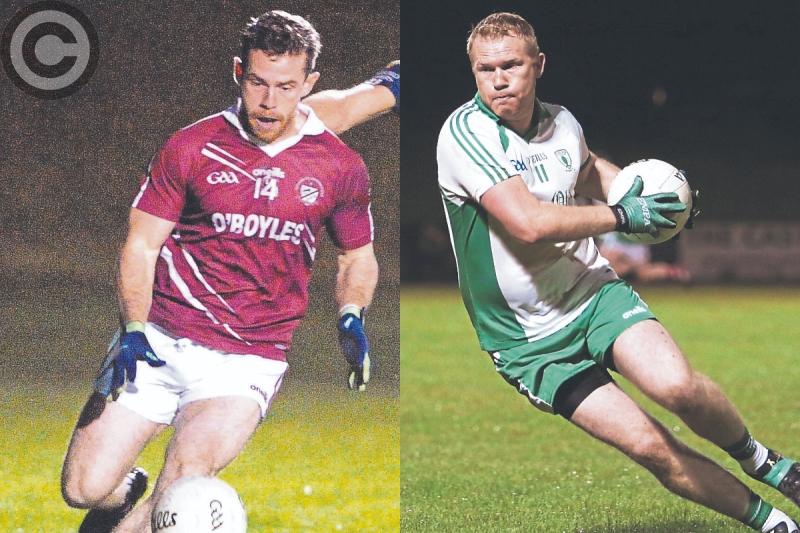 Rory Connor (Kenagh) and Paul O'Hara (Killoe) will be in action in the Junior Football Championship Final on Sunday.

After suffering the disappointment of relegation from the Intermediate grade last season, Kenagh are just a step away from making an immediate return to the second tier and are strongly fancied to win the Junior Football Championship title.

Providing the opposition in the final at Glennon Brothers Pearse Park this Sunday (1.45pm) are the Killoe second string and while the Emmet Og club captured the junior crown last year the odds are stacked against them repeating the feat.

Kenagh are a solely Junior club and before a ball was kicked in the current championship campaign the south Longford club were regarded as the red-hot favourites to win this title for the first time since 1976.

Under the driving force of former player Enda McGann, a fine blend of youth and experience has yielded some impressive results this year and Kenagh were extremely competitive in the Division 2 league - winning six of their ten games.

Manager McGann is getting the best out of the team in their fierce desire to bounce back from the setback of losing their Intermediate status and have cruised through to the junior decider.

The most emphatic manner in which they hammered Longford Slashers, 5-14 to 1-2, in the semi-final suggests that they will not be stopped in their quest for championship glory.

After playing in the senior championship in the past and who were a well established intermediate club for many years, the current Kenagh side are really too strong for the junior grade. Thus it will be a major shock if they should happen to lose the county final against Killoe on Sunday.

Backboned by former Longford seniors Shane Doyle and Rory Connor (the latter after making a great recovery from a serious injury) and with other fine footballers in Thomas McGann and Shane Farrell, it looks like a comfortable win for Kenagh.

But the Killoe second string continue to do consistently well in the junior championship and after winning the county title last year the present team (managed by Kevin Dooner) will be quietly confident of causing a big upset.

Emmet Og won their group to reach the last four and after looking in trouble in the semi-final when they trailed by six points at one stage against Colmcille, second half goals from David McCarthy and Cormac O’Reilly saw them come out on top (2-7 to 0-11) in the finish.

The key men on the Killoe team  are Emmet Toher, Paddy Hughes, Ronan Keogh, Terry McCormack and former county player Paul O’Hara (a selector with the Emmet Og senior squad) and they will be going all out to make a big impact in the junior final.

While Kenagh can take nothing for granted, they should emerge victorious in the curtain-raiser to the Intermediate final between Ballymahon and Fr Manning Gaels.