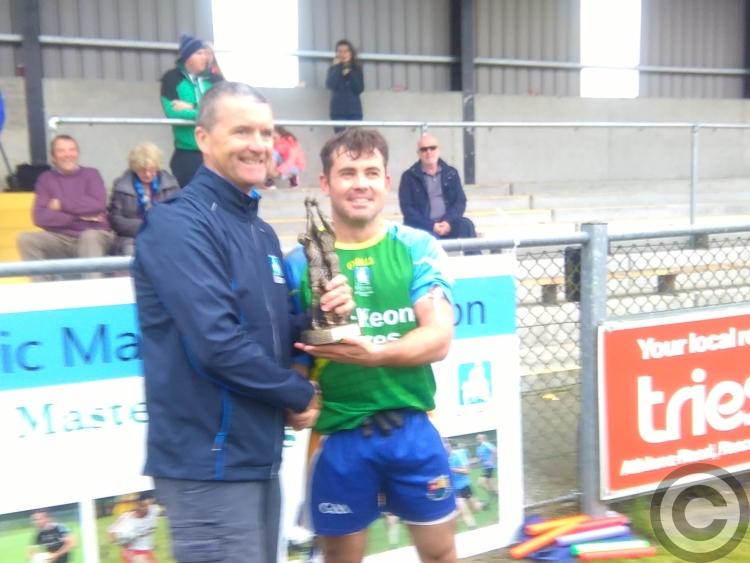 Longford/Leitrim wing back Gerry Carberry (Killoe) receiving the player of the match award in the All-Ireland Masters Shield Football Final at the St Faithleach's grounds, Ballyleague on Saturday.

Six points down midway through the first half, Longford/Leitrim came storming back to win the All-Ireland Masters Football Shield Final at the excellent St Faithleach’s GAA grounds in Ballyleague on Saturday.

Laois led by 1-6 to 0-6 at the break with Greg Ramsbottom scoring their goal but a big turning point materialised with a couple of minutes gone in the second half when Longford/Leitrim were awarded a penalty which was converted by Benny O’Rourke.

Laois player Noel Garvan was sent-off in this same decisive incident after receiving a second yellow card for a foul on P.C. Corrigan and the numerical advantage eventually began to tell for Longford/Leitrim.

Having said that, Laois recovered from this significant double setback and got a second goal from a penalty scored by Shane Cooke in the 44th minute to lead by 2-8 to 1-8.

But the very determined Longford/Leitrim side completely dominated the final quarter of this entertaining encounter in outscoring Laois by 0-8 to 0-1 on their way to winning the All-Ireland Masters Shield title.