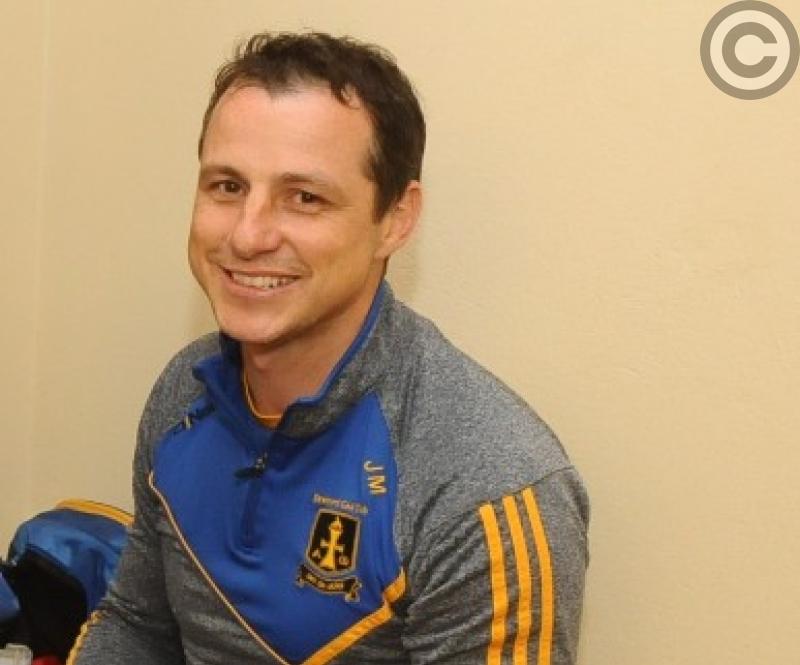 Dromard footballer Jamsie Martin who will be in action for Longford/Leitrim Masters in the All-Ireland Shield Final against Laois.

We can't say their best days are behind them for these just might be the most enjoyable days of their footballing lives as the Longford/Leitrim Masters aim for All-Ireland glory this Saturday.

The Longford/Leitrim Masters take on a star studded Laois team at St Faithleach's GAA club in Ballyleague, throw-in 1.30pm, just across the Shannon from Lanesboro in the All-Ireland Shield Final which is the curtain raiser for Dublin v Donegal in the main final.

The Leader travelled to the team's training in Drumlish and while they want to win, the big talk was of how much each and every player was enjoying their football, almost a return to the days of their youth.

Joint manager James Breslin, who shares the duties with Leitrim’s Seamus Sorohan, is delighted to be contesting the final: “At the beginning of the year, we didn’t expect to find ourselves in this position. We struggled last year but we picked up a few young lads if you like, new recruits who’ve added impetus to the whole thing and we’re really looking forward to this game on Saturday.

“You look at the lads there playing and it is a credit to themselves the shape they keep themselves in for playing. There are lads there 40 years of age and they’d put lots of younger lads to shame, they look after themselves, they’ve played football all their lives and they are committed to playing and enjoying it, that is what it is all about.”

The enjoyment factor is a huge draw for Masters football: “When you have lads from Longford getting to know lads from Leitrim they would have never met at all, it opens up the whole thing. There is great camaraderie, we have a great turnout and they are all here to enjoy it.”

The format of the Masters game where there are unlimited substitutions means that every player who commits to the panel gets to play some part according to James: “Pretty much everybody gets to play a part.

“Any day we got out during the year, one day you may have 17, some days you will struggle because a lot of these lads are involved with underage teams, they are involved with their club. You have a number of lads still playing Intermediate and Junior with their clubs, a couple of lads are still playing Senior so they have other commitments, family, etc so any day we get them is a bonus.”

Neither should anyone underestimate the standard of the games: “The standard is quite high. Last year, we had Dublin and Tyrone in the final, the standard of these guys and some of the scores, these guys just don’t lose it. They keep themselves in shape and are are able to provide some lovely football for people to watch.”

James Breslin’s  final words is an appeal to supporters to come out and cheering on Longford/Leitrim: “The Plate Final is at 1.30pm in Ballyleague, we’re right at home if you like so we’re expecting that we would have good support.”

Laois will be tough opposition for Longford/Leitrim. Littered with former county stars like Noel Garvan, Chris Conway, Colm Parkinson, Mick Lawlor, Darren Rooney and Greg Ramsbottom, they have made a big impact  in this year’s competition.

In their very first game, they pushed reigning All-Ireland champions Dublin to just four points and since then they have come through what looked like tough games with some ease. Laois had a comfortable semi-final victory over Galway, winning 1-9 to 0-5, while Longford/Leitrim held off a fast finishing Down 1-12 to 1-11 to reach the shield final.

Laois will start as strong favourites but Longford/Leitrim will take a lot of heart from the fact they pushed All-Ireland finalists Donegal very hard earlier in the competition and if they get the likes of former Leitrim senior Ray Cox on the field next Saturday, they will have an attacking edge that is hard to beat.

Leitrim showed in the All-Ireland Plate Final two years ago against a Kildare team stuffed with former Lilywhite stars that they can upset the odds as they won an extra-time thriller.

Gerry Carberry is one of the mainstays of this team and if he can combine with Cox and the McManus brothers from Carrigallen, Longford/Leitrim have a good chance of emerging victorious.