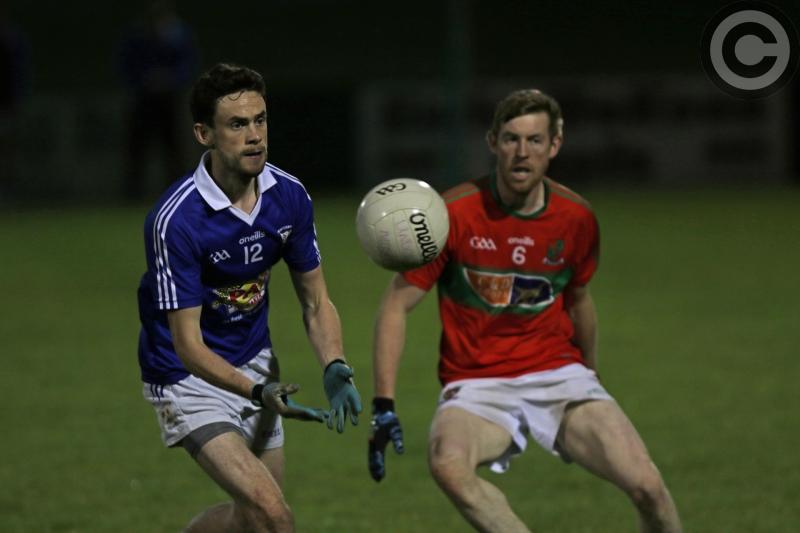 Paul Smyth on the ball for Granard ahead of Mostrim opponent Seamus Hannon. Action from the SFC relegation play-off at Allen Park on Friday night last. Picture: Matt Smyth

Darren Gallagher was most influential as St Mary’s Granard recorded their first win in this year’s Senior Football Championship, defeating Mostrim in the second round of the relegation play-offs at Allen Park, Newtownforbes on Friday night last.

A decisive goal from Gallagher in the 14th minute proved to be the difference between the sides. Mostrim, who lost Seamus Hannon through a black card just before half-time, were ahead by one point at the break: 0-6 to 1-2.

Despite Granard getting the first point of the second half through Jordan Martin in the 31st minute, Mostrim hit a purple patch and five unanswered points saw them go five points ahead by the 44th minute. Credit to Granard for staging a great comeback for the victory in what was a very good team performance despite the disappointment of relegation.

Two Brian Farrell frees got Mostrim off to a good start. Darren Gallagher then hit over a free for Granard in the 12th minute. Two minutes later the excellent Jordan Shiels set Gallagher up and he made no mistake in finding the back of the net.

Farrell hit over another free for Mostrim and in the 20th minute St Mary’s keeper Eoghan Mallon brought off a fine save to deny Darragh Doherty. Farrell kicked over the resulting ‘45 to level the game. A good Gallagher point edged Granard back in front but a Thomas Doyle score left Mostrim level again in the 26th minute.

In stoppage time Farrell kicked over another free to give Mostrim a narrow lead at half-time.

A neat Jordan Martin point put Granard back on level terms inside the opening minute of the second half but Mostrim then took control.

Padraig Joyce put them back in front in the 32nd minute; Brian Farrell kicked over two points (one free) while Darragh Doherty (free) and Dario Ciglianio were also on the scoresheet as Mostrim stretched their lead to five points midway through the second half.

With Darren Gallagher leading the charge, Granard began to come back into the game. Paddy McGivney was on target in the 45th minute with Jordan Martin scoring his second point soon after.

The experienced Stephen Lynch then fired over a fine score in the 49th minute to cut the lead to two.

Gallagher landed a ‘45 in the 50th minute and the momentum was now with St Mary’s. Lynch levelled matters in the 53rd minute with his second neat point.

One minute later Liam Sullivan gave Granard the lead but Padraig Joyce got the equaliser for Mostrim in the 56th minute.

Granard battled hard in the closing stages  to grind out a deserved win. Darren Gallagher fired over a free in the 57th minute to put his side ahead again and two minutes into stoppage time the county midfielder was on target again.

The pressure is now on Mostrim who must beat Rathcline by at least four points in the final relegation play-off at Moran Park this Sunday (2pm) to avoid the drop down into the Intermediate Championship next season.