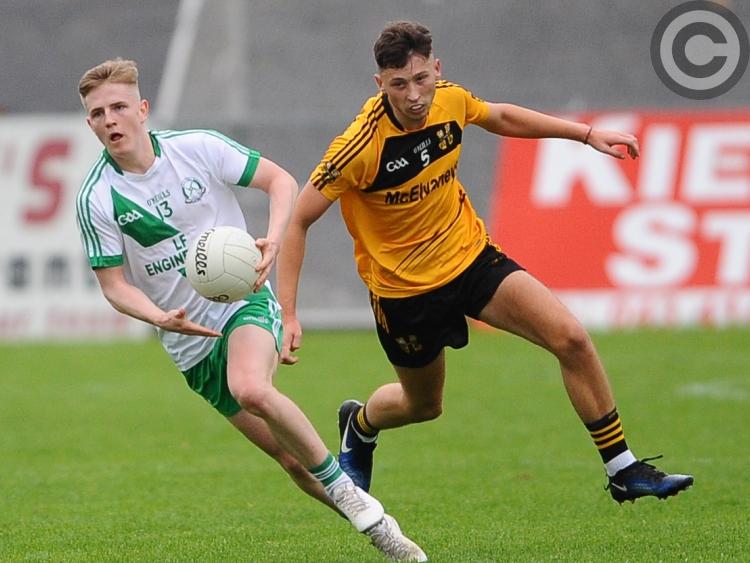 A point from a free converted by  Damien Monaghan with the last kick of the game earned Ballymore a draw against St Brigid’s in the Intermediate Football Championship quarter-final at Glennon Brothers Pearse Park on Sunday evening last.

Dylan Farrell had shown great composure a minute before that to give Killashee the lead deep into stoppage time. But Ballymore broke down the field and Ciaran Fahy was awarded a rather soft free which was converted by Monaghan to leave the sides all square in the finish.

Both sides were ahead by three points on different occasions; Killashee in the first half and Ballymore in the second half. As Killashee fought back on the changeover they created several goal chances with Ballymore keeper Alan Kiernan thwarting them on a number of occasions and Dylan Farrell also struck the crossbar with a great strike.

Killashee made a fine start to the game with Francis Dolan, Dylan Farrell and Mel Shanley kicking over points but Ballymore were level by the 12th minute with three Glen Kelly points (two frees).

A good Cian O’Hara effort edged Ballymore ahead in the 16th minute. Killashee squandered goal chances while Kelly was on target again for Ballymore with a fine point in the 17th minute.

A great Cillian Lee point and a Francis Dolan free drew Killashee level by the 26th minute. John Kavanagh put in a great block to deny Dylan Farrell a shot in the 27th minute. Ciaran Reilly edged Ballymore in front again before a well struck ‘45 by Farrell levelled the game in first half stoppage time, 0-6 to 0-6.

Ballymore started the second half well with Glen Kelly (free) and two Damien Monaghan scores giving them a three point lead by the 39th minute. Francis Dolan (free) replied for Killashee with substitute Johnny Casey cutting the gap to one in the 42nd minute.

Ballymore substitute Bernard McElvaney then scored a fantastic point  and minutes later his cousin Alan Kiernan done very well to deny Killashee a goal. In the 53rd minute Dylan Farrell was unlucky to see his fine effort come off the crossbar.

Down the other end Bernard McElvaney raced through for Ballymore but Killashee were able to gain possession. They went up the field and were awarded a free which Dylan Farrell pointed.

In the 56th minute Mel Shanley raced through and with Ballymore keeper Alan Kiernan in fine form he done the simple thing in blasting the ball over the bar for a point to level matters.

In the third minute of stoppage time Dylan Farrell done very well before composing himself and shooting over the bar to give Killashee the lead.

With time almost up Ballymore went down the field and Ciaran Fahy was adjudged to have been fouled.

Damien Monaghan was given the responsibility of taking the free and he fired the ball over the bar to earn his side a replay in Newtowncashel this Friday night (8.30pm) to determine who meets Fr Manning Gaels in the semi-final a week later.