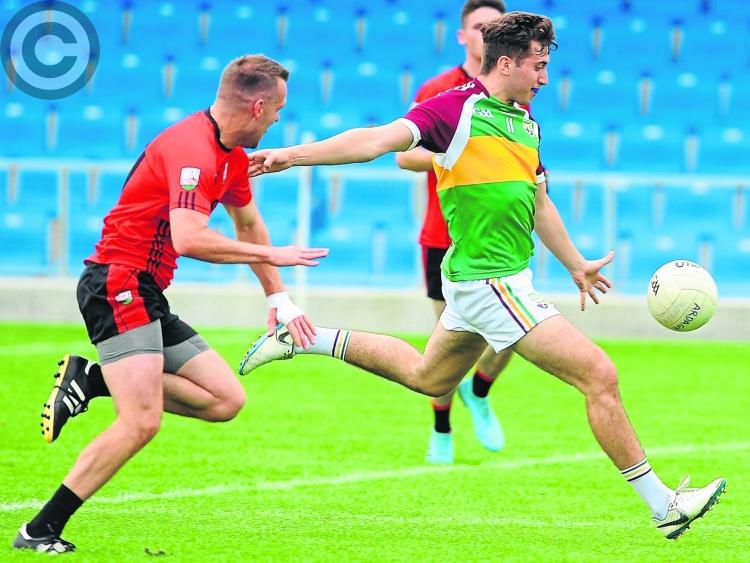 Rory Sullivan on the attack for Ardagh Moydow ahead of Cashel defender Ronan Farrell. Action from the IFC quarter-final on Saturday evening last. Picture: Declan Gilmore

Ardagh Moydow had to withstand a late Cashel comeback as they booked their place in the Intermediate Championship semi-final with a two point win at Glennon Brothers Pearse Park on Saturday evening last.

A point by Killian Farrell in the 56th minute put four points between the sides but a fantastic goal from Andrew Farrell moments later closed the gap to just one point. Daryl Carrigy then kicked over two points to put three between the sides.

A great Gary Kenny point and a fisted effort from substitute David Casserly brought Cashel to within one of Ardagh Moydow in the second minute of stoppage time before Killian Farell sealed the win just before the final whistle.

Barely 30 seconds had gone on the clock when Andrew Farrell hit over a fine point for Cashel. Carrigy got the first score for Ardagh Moydow in the second minute before Rory Sullivan caught Cashel keeper Shane Bannon off his line in the third minute to score the first goal.

The lead was just one point in the seventh minute after Gary Kenny pointed a free. Aaron McTiernan brought a fine save out of Shane Bannon before Shane Henry restored the Ardagh Moydow three point advantage in the eighth minute.

Ardagh Moydow were dealt a blow in the 13th minute when Rory Sullivan received a black card. For all their possession Ardagh Moydow failed to show it on the scoreboard as they squandered a few scoring opportunities. Cashel battled hard and were level in the 30th minute when Conor Flood kicked over a fine effort.

Ardagh Moydow responded in terrific fashion as the ball was worked quickly down the field and Killian Farrell found the back of the net with an excellent strike to give his side a three point lead going in at the break: 2-5 to 0-8.

Cashel defender Mel Farrell blocked a goalbound shot  from Daryl Carrigy in the 34th minute. Padraig Farrell then fired over a point for Cashel two minutes later to register the first score of the second half.

Gary Kenny kept Cashel in contention in kicking over a number of frees but a fine point followed from Paddy Keenan in the 52nd minute before a good Killian Farrell score extended the Ardagh Moydow lead to four points.

Cashel replied with Andrew Farrell planting the ball in the back of the Ardagh Moydow net to leave just one point between the sides with three minutes of normal time remaining.

While Daryl Carrigy fired over two points in quick succession to ease the pressure on Ardagh Moydow the spirited Cashel side hit back with a great Gary Kenny point and another score from David Casserly to leave the minimum between the sides with two minutes of stoppage time remaining.

Ardagh Moydow won possession from the kick-out with Killian Farrell eventually getting the chance to fire the ball over the bar to clinch the victory and a place in the Intermediate Championship semi-final against Ballymahon.