Longford SFC: Major shock as Colmcille knock the champions Mullinalaghta out of the Connolly Cup 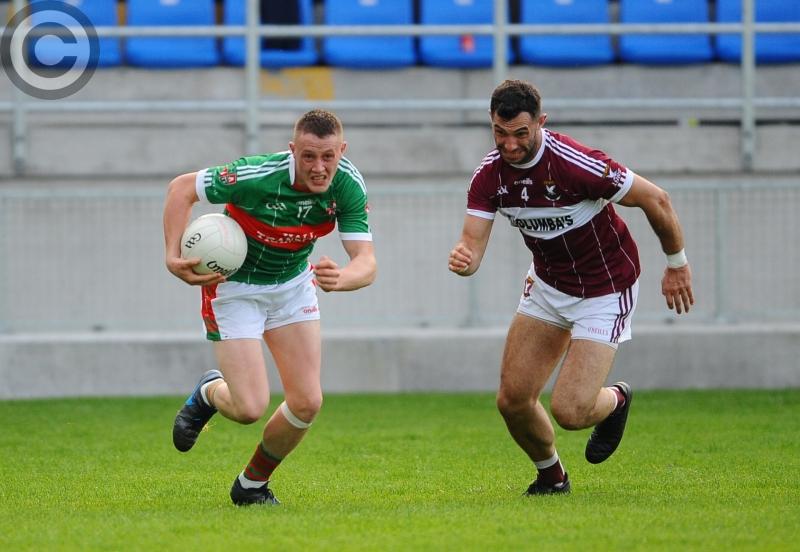 Cathal Reilly on the attack for Colmcille in breaking away from Mullinalaghta defender Simon Cadam. Action from the SFC quarter-final on Sunday evening. Photo: Declan Gilmore

The race for the 2019 Senior Football Championship title was thrown wide open as Colmcille knocked the reigning Longford and Leinster Club champions Mullinalaghta out of the Connolly Cup.

A most entertaining quarter-final clash played in front of a big attendance at Glennon Brothers Pearse Park on Sunday evening produced a dramatic finish as man of the match Barry McKeon scored the decisive winning goal from a penalty in the fourth minute of stoppage time.

The outstanding McKeon (who clocked up a total of 1-7) then fired over his final point to leave Eugene McCormack’s side leading by 1-14 to 1-12 and on the brink of a famous victory.

While David McGivney converted a free for Mullinalaghta to close the gap to the minimum of margins in the eighth additional minute the final whistle sounded seconds later to signal the end of St Columba’s quest for a four-in-a-row of county SFC titles.

Make no mistake about it, Colmcille were worthy winners in advancing to meet Killoe in the semi-final in a couple of weeks time and showed a lot of character to overcome the significant setback of losing Enda Macken to a second yellow card in the closing stages of the first half.

Mullinalaghta, who suffered a big blow when Donal McElligott was forced to retire injured in the 20th minute, were also reduced to 14 players when Francis Mulligan was dismissed for a second booking midway through the second half.

And stunned St Columba’s tale of woe was complete when Aidan McElligott suffered the same fate when he was sent-off on the stroke of the full-time whistle.