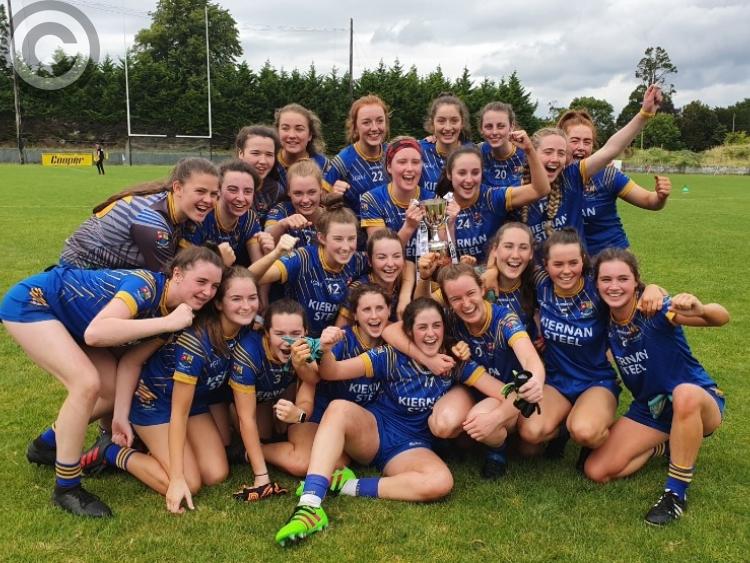 The Longford U-18 ladies celebrate following their great win over Roscommon in the All-Ireland Minor 'B' final at Duggan Park, Ballinasloe on Saturday.

What a wonderful success story for Longford ladies football as another All-Ireland title was won at Duggan Park in Ballinasloe on Saturday.

Emulating the tremendous feat of the U-16 girls a couple of weeks earlier, the county minors produced a strong finish to master Roscommon to capture the All-Ireland ‘B’ title.

The impressive Ciara Healy was inspirational as the Longford U-18s were crowned All-Ireland champions after withstanding a Roscommon comeback in the second half.

Longford played some great football and had opened up a five point lead inside the opening 10 minutes. Dearbhaile Rooney kicked over their first point in the third minute and that was followed by a neat score from Ciara Healy. In the 10th minute Longford got a goal when Clodagh Lohan shot low to the net.

After being completely outplayed in the early stages of the game, Roscommon finally got their first point in the 18th minute from a harsh free given against Ciara Sutton and Aimee O’Connor pointed. Ellen Irwin followed that up with a great score in the 20th minute.

Longford were ahead by five again in the 24th minute before Roscommon got their third and final point of the first half moments later. Longford replied with points from Lohan, Rooney and Lauren McGuire to lead by 1-7 to 0-3 at the break.

Roscommon were a different proposition in the second half and got a fortuitous goal through O’Connor - she appeared to take a few extra steps - and then a free from the same player cut the gap to just three.

It was all Roscommon and in the 41st minute they drew level; Michaela Keogh’s shot was saved by Riane McGrath after stopping Oonagh Kelly’s initial shot but she scored from the rebound.

In the 46th minute Roscommon’s Kate McPhillips was sin binned but three minutes later O’Connor put Roscommon ahead for the first time.

In the 52nd minute Longford were awarded a penalty after Lauren McGuire was taken down by Megan McKeon. McKeon was sin binned and Healy converted the penalty to put Longford back in the lead.

Longford pushed on from the penalty goal and sealed a great win with points from Healy, Grace Shannon and McGuire.