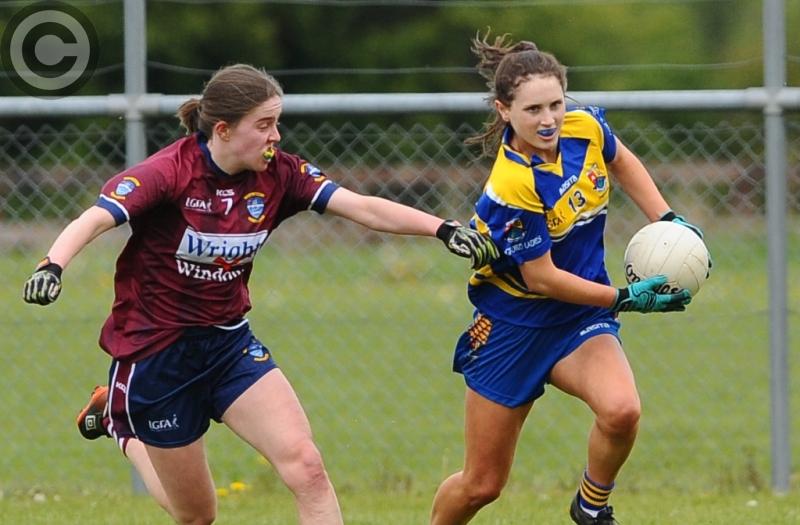 Clodagh Lohan (Grattans) pictured in action for Longford against Westmeath in the Leinster Minor 'B' Final.

After already winning the All-Ireland U-16 ‘B’ title, hopes are high of another major success for Longford ladies football at Duggan Park in Ballinasloe this Saturday, throw-in 1pm.

Neighbouring rivals Longford and Roscommon will battle it out in the All-Ireland Minor ‘B’ championship final, curtain-raiser to the Ladies All-Ireland SFC quarter-final between Cork and Tyrone, 3pm.

On the evidence of their easy win over Westmeath by the wide margin of 20 points in the Leinster Minor ‘B’ final the indications are that Longford will be hard beaten in their quest for All-Ireland glory.

Clodagh Lohan was superb as Longford captured the Leinster Ladies Football Minor ‘B’ title with a comprehensive victory over neighbours Westmeath in the final at the Kinnegad grounds on the May Bank Holiday Monday.

The Grattans girl scored three of Longford’s seven goals and her overall performance  was terrific. Longford’s other forwards all played their part in the win as did the Shannon sisters at midfield and Orla Nevin at centre-half back.

Longford were in control of this game from start to finish and only for a two minute spell early on in the first half they were always ahead. They played some wonderful football and their fitness was evident throughout.

Hannah Glennon kicked over the opening point inside the second minute. Lauren McGuire was unlucky not to find the back of the net one minute later. Dearbhaile Rooney fired over Longford’s second point in the seventh minute.

Westmeath went ahead for the first and only time in the eighth minute when Grace Halligan found the back of the net. The lead lasted only two minutes as Longford got their first goal in the 10th minute through Hannah Glennon.

Halligan then pointed for Westmeath while Ciara Healy and Molly Mulvihill kicked over excellent points for Longford. Grace Shannon got Longford’s second goal in the 19th minute; after winning possession she raced through and fired the ball to the net.

One minute later Dearbhaile Rooney got Longford’s third goal. Down the other end Sorcha Dawson done well to clear the ball off the line. Lauren McGuire followed with a point. Halligan kicked over her side’s second point in the 25th minute as Westmeath struggled to get scores.

Right before half-time Longford got their fourth goal through Molly Mulvihill as they led the Lake County by a commanding 13 points: 4-6 to 1-2.

Westmeath got the opening point of the second half but there was to be no type of comeback. Ciara Healy set up Clodagh Lohan in the 34th minute as she fired the ball over the bar.

Longford’s Kara Shannon was sin binned in the 37th minute but it mattered little as moments later Lohan raced through to score a sixth goal for Longford. The exceptional forward grabbed her second goal in the 38th minute as Longford were relentless in attack.

Ciara Healy then pointed a free to extend the lead to 19 points. Westmeath’s first score of the second half was a pointed free from Halligan in the 43rd minute and she followed up with a second one a minute later.

Clodagh Lohan completed her hat-trick of goals for Longford in the 48th minute.  Lauren McGuire followed up with a point before Lohan kicked over an excellent score in the 53rd minute.