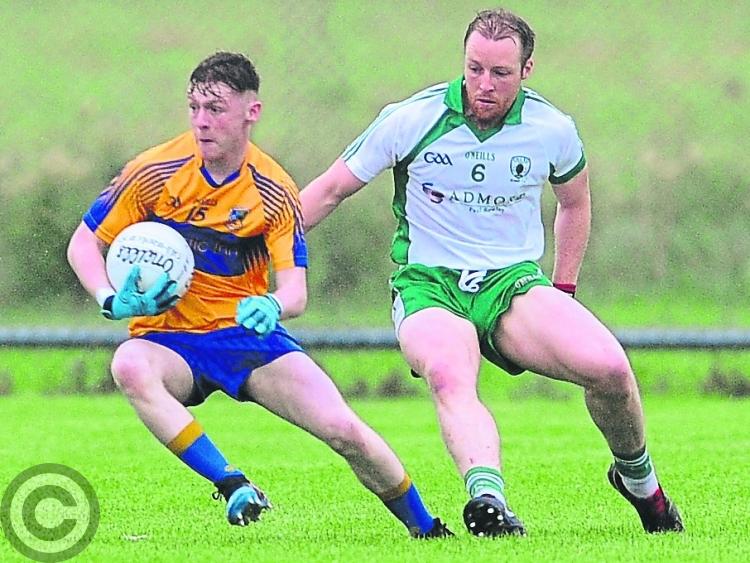 Aidan McGuire on the attack for Carrickedmond in his bid to evade the challenge of Killoe defender Padraig McCormack. Action from the SFC Group 2 first round game on Sunday last. Pic: Declan Gilmore

For the teams defeated in the opening round of the senior football championship last weekend the pressure is on to make it through to the quarter-finals with particular emphasis on the Dromard v Granard clash at Lynch Park in Abbeylara this Sunday, throw-in 2pm.

Dromard let victory slip against Clonguish in a close encounter at the Monaduff grounds in Drumlish on Sunday last and are now facing a must win game against Granard, taking into account that the remaining group fixture for Niall Sheridan’s side is against Mullinalaghta.

Victory for the young St Mary’s team will leave them in a strong position to reach the last eight but the value of vast experience should stand to Dromard in their quest to make further progress.

Mostrim were most unfortunate not to score a surprise win over Abbeylara at the Higginstown grounds on Friday evening last, losing out by a solitary point after conceding a goal deep into stoppage time.

Things do not get any easier for the Edgeworthstown outfit who take on Killoe in the Round 2 fixture at Keenan Park in Ardagh this Friday evening (8pm) and it will probably all come down to their final group game against Carrickedmond.

Having said that, Carrick could make it tough for Abbeylara at C&D Devine Park on Saturday evening (7.30pm).

Rathcline were the only senior club not in action last weekend, having received the bye in the first round of the three team group, and last year’s Intermediate title winners make their first appearance in the 2019 Connolly Cup against Colmcille at Emmet Park in Killoe on Sunday evening (7.30pm).

Needless to say, the Rathcline manager Denis Connerton will have his homework done in the hope that his native club can cause an upset but that is highly unlikely.

Colmcille drew with Longford Slashers in a most entertaining encounter on Saturday evening last and Eugene McCormack’s side will be strongly fancied to book their place in the quarter-finals with a win over Rathcline.

Mullinalaghta, who started the defence of the county title with a comprehensive win over Granard, meet Clonguish in the Round 2 fixture in Dromard on Saturday evening.