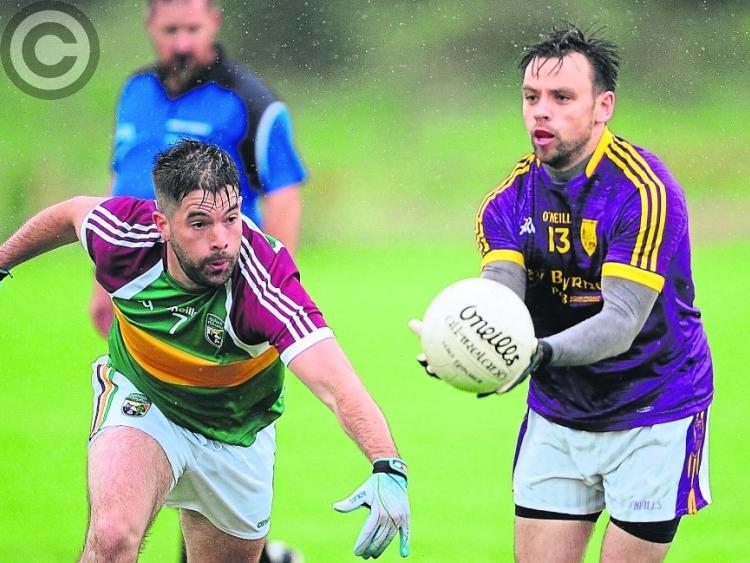 Last year’s beaten Intermediate finalists Ardagh Moydow made a strong start to the current Gerry Hennessy Cup campaign when they crushed Grattans in the Group 2 first round clash at a wet Leo Casey Park in Ballymahon on Sunday evening last.

It wasn’t a great spectacle with the bad weather playing its part. The biggest cheer of the came in the 48th minute when Daryl Carrigy was brought on, making a welcome return to championship action after suffering a cruciate injury last year.

Grattans took an early lead when Reuben Murray and Rory Howlin kicked over points but after that Ardagh/Moydow took complete control.

A good move in the seventh minute ended with Paddy Ganley grabbing a goal to give them a two point lead and he followed that up with a pointed free.

Killian Farrell then added a point before Ardagh/Moydow got a second goal. Grattans keeper Eoin Kelly made a fine save from Rory Sullivan who then pounced on the loose ball and finished to the net.

Ganley and Finn Hartmann kicked over points to extend the lead to nine points by the 17th minute. After going 15 minutes without a score Grattans got their third point in the 19th minute through Stephen Farrell.

They were unable to add to that as Hartmann kicked over points before Killian Farrell grabbed his side’s third goal in the 27th minute. Ganley caught a kick-out in the 30th minute and fired the ball over the bar to stretch Ardagh/Moydow’s advantage to 14 points.

Killian Farrell converted a free just before the break to leave his side in a very commanding 3-9 to 0-3 lead and Paddy Ganley landed the opening score in the second half.

Gerard Victory scored two points for Grattans (one free) before Ardagh/Moydow replied with a good score from wing back Conor Carroll in the 46th minute to extend the lead to 18 points.

Credit to Grattans who continued to battle on but Ardagh/Moydow were just too strong  and constantly pressed and put them under pressure. Grattans were forced into conceding a number of frees which were duly converted by Killian Farrell.

Two fine points from Farrell put 21 points between the sides by the 51st minute. Another Gerard Victory free saw Grattans register their sixth score but Ardagh/Moydow hit back with Farrell kicking over two points (one free).

Grattans got their last point in the 58th minute with Killian Farrell (who clocked up a total of 1-8) once again accurate from a free before Daryl Carrigy landed the final score for Ardagh/Moydow just before the full-time whistle.