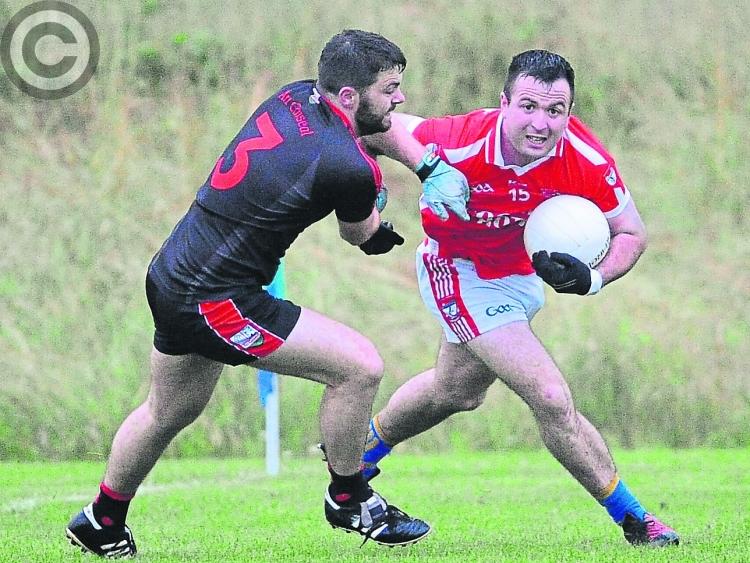 Kyle Fitzmaurice on the attack for Ballymahon in his bid to evade the challenge of Cashel defender Mel Farrell. Action from the Intermediate Championship first round game. Photo: Declan Gilmore

The value of the experience gained in the senior grade for the past few years stood to Ballymahon as they gradually asserted their superiority over Cashel in the Intermediate Football Championship first round clash at the Clonbonny grounds, Lanesboro on Friday evening last.

The sides were all square at the break (0-6 to 1-3) but Ballymahon produced a strong second half display to win with considerable ease in the end, shooting some excellent scores in the process, and Ken McKinley’s sharp side look like serious contenders in the battle for the Gerry Hennessy Cup.

While it was a disappointing defeat for Cashel their cause suffered a severe setback when commanding centre-half-back Conor Farrell was stretchered off injured (knee) in the closing stages of the first half.

Ballymahon were leading by 0-6 to 0-3 at the time with their points coming from Mark Connor (free), Ros Claffey, Kyle Fitzmaurice (2), Thomas Mulvihill and Eddie Noonan while Aidan Rowan (free), Conor Flood and Gary Kenny (free) replied for Cashel.

Luke Casey came to Cashel’s rescue when he cleared a flicked goal attempt from Noonan off the line in the 10th minute and while Conan Casey’s charges enjoyed a lot of possession in the first half they were hampered by some poor finishing.

Cashel were thrown a lifeline in first half stoppage time when Niall Casey pounced on the breaking ball to finish a close range shot to the net but Ballymahon took over completely in the second half.

Powered by the penetrating runs of the prominent Kevin Diffley at midfield with solid support from the hard working John Nevin, the Ballymahon attack were provided with a great supply of the ball with the deadly accurate Mark Connor firing over five points (four frees) on the changeover.

Eddie Noonan and Kyle Fitzmaurice, who was also a constant threat to the Cashel defence, were on target again in the second half and they scored three points apiece (all from play) during the course of the game played in difficult slippery conditions due to the wet weather.

John Nevin capped a competent performance to land a glorious long range effort in the 42nd minute while the best Cashel could manage in the second half was a point from a free converted by Aidan Rowan in the 38th minute.

Whatever chance Cashel had of staging a dramatic late comeback were dashed when Conor Flood had a goal attempt well saved by Ballymahon keeper Dean Reilly and the wide margin of eight points separated the sides in the finish.