Longford U-16 ladies one step away from All-Ireland glory

Title decider against Waterford in Birr this Wednesday evening, 7pm 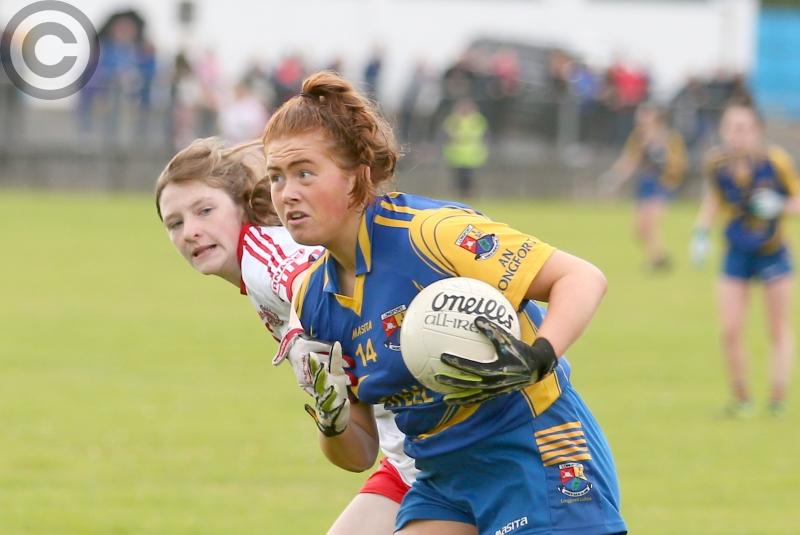 Molly Mulvihill pictured in action for the Longford U-16 ladies in the recent All-Ireland 'B' semi-final against Tyrone at the Mullahoran grounds. Photo: Syl Healy

A goal from Kamille Burke in the 56th minute saw Longford take Tyrone in the recent Ladies Football All-Ireland U-16 ‘B’ semi-final at the Mullahoran grounds to book their place in the title decider against Waterford to be played at St Brendan’s Park, Birr Co Offaly this Wednesday evening, 7pm.

Longford produced a fantastic performance in the first half and three goals proved to be crucial as they went in at the break six points in front.

Tyrone were a different proposition in storming back in the second half and made Longford work hard for their eventual victory by a single point, 5-8 to 3-13.

Longford were dealt a blow in the 50th minute when Molly Mulvihill harshly received a yellow card but Paul McGuire’s charges battled it out to win by a solitary point in a tense and exciting finish.

Lauren McGuire and Grace Shannon kicked two early points for Longford and in the fifth minute Kate Shannon scored their first goal. Molly Mulvihill fired over a point before Grace Shannon found the back of the net in the 11th minute with a good strike.

It was all Longford and in the 15th minute Tyrone keeper Anna Grew pulled off an excellent save to deny Sarah Tully a goal. Grace Shannon followed up with a pointed free as Longford opened up a 10 point lead midway through the first half.

Tyrone’s first score didn’t arrive until the 17th minute with Maeve McCrystal scoring a goal. Careen O’Neill then fired over a point as the Ulster side tried to close the gap.

Those scores were cancelled out in the space of two minutes as Molly Mulvihill scored a point and then added a third goal for Longford. Emma Loane and Katie Cumiskey got points for Tyrone while Lauren McGuire hit over her second point to put nine between the sides in the 28th minute.

One minute from the break Maeve McCrystal got a second goal for Tyrone to leave them trailing by 3-6 to 2-3 at half-time.

McCrystal and Lauren McGuire scored points from frees in the early stages of the second half before Tyrone took a hold of the game and fought hard to get back into contention. McCrystal should have scored her third goal but somehow missed the target.

Longford got a fourth goal in the 43rd minute when Molly Mulvihill was fouled and Melissa O’Kane coolly converted the penalty. Tyrone hit back with points from McCrystal and Rhianne Monaghan and then a goal from Aoife Horisk in the 49th minute  cut Longford’s lead to just one point.

A fine point from midfielder Caireen O’Neill drew Tyrone in the 50th minute and soon after  McCrystal put Tyrone ahead for the first time. Credit to Longford who responded with a goal from Kamille Burke in the 56th minute and that proved to be the decisive score.

Burke fired over Longford’s final point in stoppage time as Tyrone’s comeback fell short and the midlanders will be in a confident frame of mind for the final against Waterford, just one step away from All-Ireland glory.