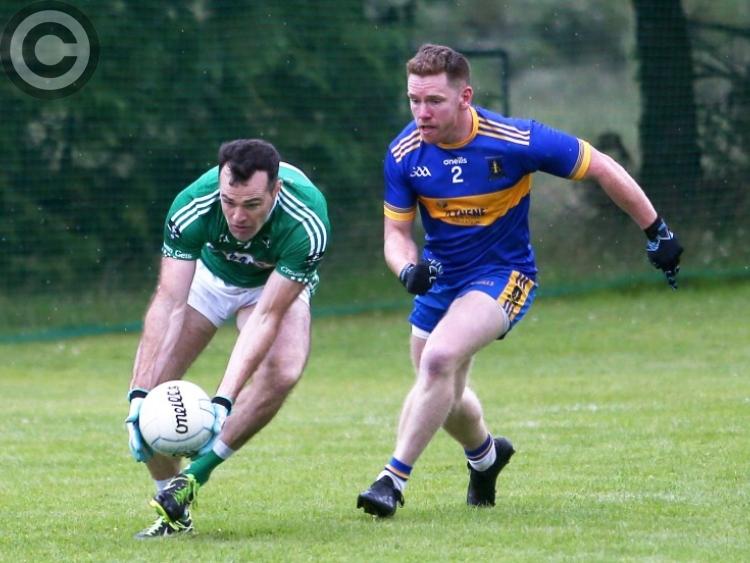 Paul Barden on the ball for Clonguish ahead of Dromard defender Paul McGee. Action from the SFC Group 1 game at the Monaduff grounds, Drumlish on Sunday. Photo: Syl Healy

Clonguish came from three points down to register a good win over Dromard in the Senior Football Championship Group 1 game at the Monaduff grounds, Drumlish on Sunday.

Credit to Clonguish who never gave up and the introduction of David Barden approaching the midway mark in the second half sparked them into life as they went on to outscore Dromard by six points to one during the remainder of the match.

Dromard’s tale of woe was complete when Ronan McEntire was sent-off near the end after receiving a second yellow card. They were dealt a blow early in the first half when Cian Mimnagh was forced to retire injured with just nine minutes gone in the game.

A terrific point from Joe O’Brien gave Clonguish the lead in the 53rd minute. Then Francis McGee was fouled and Jamsie Martin kicked over the free in the 57th minute.

Clonguish finished the stronger with David Barden kicking a fine point in the 60th minute to give his side a slender lead and two minutes into stoppage time Joe O’Brien fired over another free to clinch the victory under the guidance of new manager John Rogers from Strokestown.