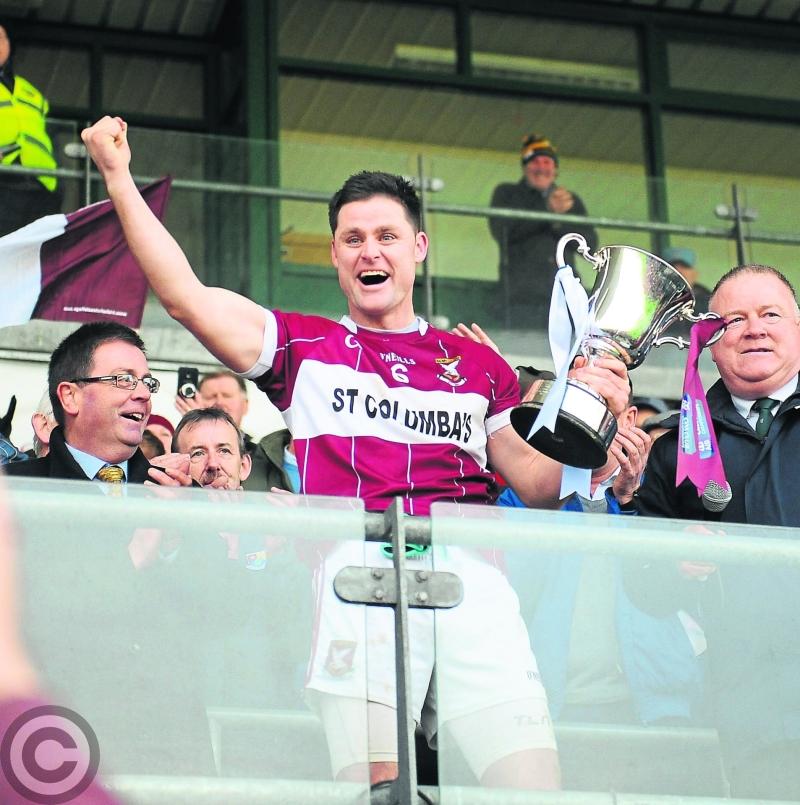 While there is a whole new dimension to this year’s Longford senior football championship with the presence of the Leinster club title holders in the field it is very hard to look beyond the might of Mullinalaghta in the race for the Connolly Cup.

St Columba’s have set a very high standard and while Mickey Graham is no longer in charge the changeover to new manager Finbar O'Reilly is working well, clearly reflected in the fact that the Longford champions have won  six of their seven games played so far in the Division 1 league this season.

The surprise defeat at home to Colmcille on Sunday last was their only setback under the guidance of O'Reilly from the Lacken club in Co Cavan.

He  is making his presence felt in the Mullinalaghta mission to complete a record equalling four-in-a-row of county SFC titles. The former Lacken manager was a mentor with the St Pat's Cavan team who won the Ulster Colleges Senior 'A' Football Championship title a couple of years ago.

Rian Brady, who was unavailable to line-out with Longford in this year’s championship and is presently in America, is another vital cog in the Mullinalaghta machine that looks unstoppable and it will be a big surprise if any of the other title contenders end up winning the coveted Connolly Cup in 2019.

What Mickey Graham achieved will never be forgotten by the proud people in the small half-parish situated in the north of the county but a new chapter in the glorious St Columba’s success story will unfold at C &D Devine Park in Edgeworthstown this Saturday evening.

Providing the opposition in the first round of the 2019 championship (7.30pm) will be Granard who are given little chance of springing a shock, particularly without the driving force of Darren Gallagher who is currently in the United States.

While St Mary’s (now managed by Monaghan native Ryan Casey) are unbeaten in Division 2 of the league this season on their way to winning the Michael Moran Cup, this is a big step up in class but they will give it their best shot.

The other game in Group 1 this weekend is the always intriguing clash between old rivals Clonguish and Dromard who meet at the Monaduff grounds in Drumlish on Sunday, throw-in 2pm.

The losers here will be under pressure to make it through to the quarter-finals and while Clonguish started the season with new manager Andrew Kavanagh at the helm, he had to endure a difficult short reign before eventually deciding to depart the post.

Former Roscommon footballer John Rogers from Strokestown is now in charge of Clonguish and it will be interesting to see what sort of impact he can make with a potentially talented side.

Rogers, a member of the Roscommon U-21 management team a few years ago, will be a familiar figure to local soccer followers after playing with Longford Town in the League of Ireland during the groundbreaking Stephen Kenny era.

The new Dromard manager is Niall Sheridan who was highly regarded as one  of the most powerful players in the country when he commanded the 'target man' role at full-forward for Longford in his playing days.

A member of the Abbeylara team who won the county SFC title in 2006 and who coached Granard in recent years, Niall has made an immediate impact in Dromard with the winning of the Bertie Allen Cup Reserve Football League 1 title.

Diarmuid Masterson, now retired from the inter-county scene after serving Longford so well for many years, is enjoying a new lease of life at club level and is very much the key figure on the Dromard team.

While they are missing a number of players for different reasons, Killoe will gradually get stronger as the championship moves on but cannot afford to take anything for granted in their opening round fixture against Carrickedmond at Leo Casey Park in Ballymahon on Sunday evening (7.30pm).

Killoe will be looking for inspiration from Longford players Michael Quinn, Padraig McCormack, Daniel Mimnagh and Mark Hughes in their bid to make a winning start in the group stage while another of their main men is Sean McCormack, another recent retiree from inter-county football who wore the blue and gold jersey with a lot of distinction.

Former Abbeylara player Maurice O'Connor, who lined-out with his native club when they won the senior championship title back in 2006, is now in his third consecutive season in charge of Carrickedmond and he is working with a number of talented young players who have registered a few positive results in the Division 1 league this season.

Also pitted in Group 2 are Abbeylara and Mostrim who will start the 2019 senior championship at the Higginstown grounds in Granard this Friday evening, throw-in 8pm.

Abbeylara have suffered the bitter disappointment of losing the last four county SFC title deciders, three against Mullinalaghta, and will be very hard pressed to finally make the big breakthrough in the current campaign.

Former Granard and Longford footballer Mickey Harkin is back for a second stint in charge of Abbeylara and he will certainly be remembered for his previous spell at the club as he guided Abbeylara to senior championship glory in 2006, the last time they captured the Connolly Cup.

After spending the past three years as a Longford senior mentor Enda Macken is back in club football as the manager of Mostrim, having previously coached his native Dromard.

Edgeworthstown have caused a few upsets in the championship in recent years but are very inconsistent with a tendency to struggle against supposedly weaker opposition.

This is a tricky group but it will probably boil down to the final round fixture between Carrickedmond and Mostrim to determine who claims one of the quarter-final spots.

While the general opinion is that Colmcille and Longford Slashers will qualify from Group 3,  Rathcline (receiving the bye in the opening round) may well prove to be no pushover and particularly so with Denis Connerton in charge of his native club.

Former Longford manager Connerton has enjoyed a great record with different clubs down through the years and while he is facing a big challenge with last year's Intermediate champions the emergence of some talented young players is  a positive factor for the Lanesboro side.

First into the championship arena in the group of three are Colmcille and Slashers who clash at Pairc na nGael in Dromard on Saturday evening, throw-in 7.30pm.

Eugene McCormack, now at the helm in Colmcille, will be hoping to get the best out of a team with considerable potential and they got a timely championship boost with a fine win over Mullinalaghta in the league.

Adding extra spice to this tasty opening round fixture is the fact that McCormack is a former Slashers manager.

Roscommon native Noel O’Brien, who guided his home club St Brigid's Kiltoom to Connacht Club SFC titles in 2010 & 2011, is the new Slashers supremo and the sky-blues received a big lift when they eventually registered their first win in the league this season - beating Killoe by seven points a couple of weeks ago.

Vastly experienced coach O’Brien is working hard with a generally young Slashers squad as the club bid to advance from the group stage for the first time in three years.

Just three teams will miss out on a place in the last eight of the 2019 senior football championship and the prediction is that Granard, Carrickedmond and Rathcline will end up in the fierce battle to avoid relegation.

And with two clubs making the drop into next year’s Intermediate Championship the pressure is on.

Mullinalaghta are rightly regarded as the firm favourites to collect the Connolly Cup on the first Sunday in October and are highly unlikely to slip up in their quest to complete a magnificent four-in-a-row that was only ever previously achieved by the great Clonguish team from 1962 to 1965.