Longford ladies in championship action at home to Wicklow 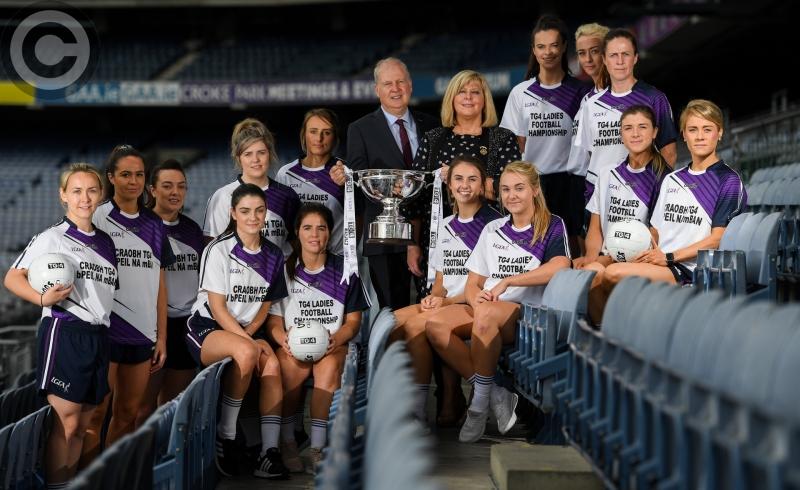 Longford captain Emer Heaney (seated left) pictured with players from the other counties at the launch of the TG4 All-Ireland Intermediate Championship in Croke Park. Pic: Eóin Noonan/Sportsfile

Longford ladies football manager Enda Sheridan is being realistic as he looks ahead to the All-Ireland Intermediate Championship with his side in a very difficult group alongside Wicklow, Meath and the title  favourites Tipperary.

Sheridan is fully aware of how tough the group is: “It’s a very tough group. Tipperary are red hot favourites. You look at some of the footballers they have and they are playing in Division 1 and you look at some of the teams they have beaten. They walked through the Munster Championship. I thought Meath would put it up to them but they have lost players and are not as strong.”

Longford’s first fixture is this Sunday against Wicklow at Glennon Brothers Pearse Park (3pm) and they then face two tricky away games.

Sheridan said: “We have two games away; Tipperary and Meath. You look at how we played in the league semi-final against Meath. There is lots to take from that. We need to tighten up our defence which I think we will do.”

For Sheridan preparations for the championship have seen Longford focusing on areas they need to improve in. He knows the quality within his side and it’s about getting the best out of them.

“We know where we have gone wrong and where we can improve. Against Kildare in the opening round of Leinster we had players missing due to the Leaving Cert and Emer Heaney got injured in the warm-up.

One area Sheridan knows Longford need to work on is putting away their goal chances. They created several chances against Meath in the league semi-final; putting away three of them with the Meath keeper pulling off five excellent saves.

“Scoring goals. That has been an issue for us. We are getting in those one on one positions but we are not punishing teams. For me that is a positive but the fact it is happening a little too often in games we need to just work on that.”

A good start to the championship is important and Sheridan is delighted to have the game at home in Longford. He knows what dangers Wicklow will pose.

“Both ourselves and Wicklow will be looking at it as a ‘must win’ game. They have four or five players lining out for top Dublin club Foxrock Cabinteely. Wicklow are a decent team and we are very similar. Home advantage is definitely a big plus.”

The Longford manager  is looking no further than the game against Wicklow.

“On any given day in Ladies football or any sport, anything can happen. The big thing for us is to go and win the first game and take it from there.

“With two teams being relegated this year we are in dangerous territory if we lose to Wicklow. We are just focusing on that game.”

Despite staging a determined late comeback with the referee playing eleven minutes of injury time, the Longford ladies had to settle for second best against Kildare in the Leinster Intermediate Football Championship first round clash in Newbridge in early June.