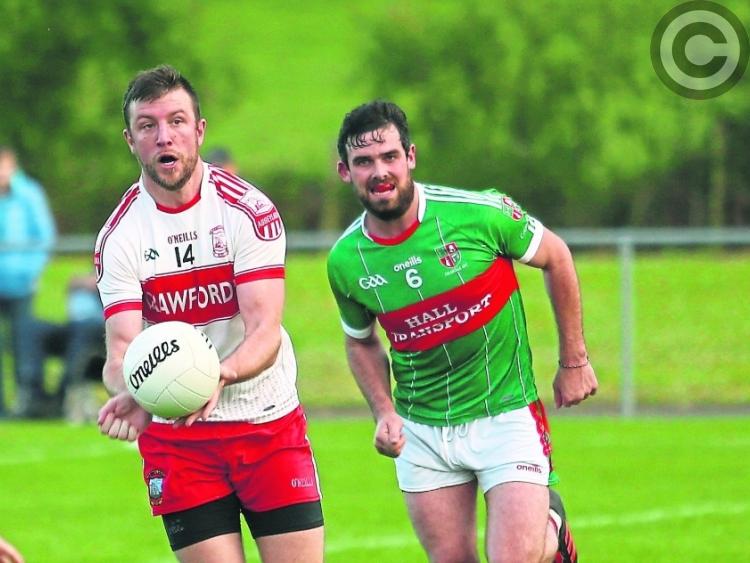 An excellent goal from Kevin Smyth proved to be crucial as Abbeylara recorded a deserved win over Colmcille in the Division 1 football league clash at Lynch Park on Friday evening last.

Both sides finished the game with 14 players after Colm P Smyth (Abbeylara) and Martin Mulligan (Colmcille) were sent off after tempers flared near the end.

The goal came in the 48th minute after Reece Reilly, who played very well, done all the hard work to get inside but his shot came off the butt of the post. Smyth collected the rebound and rifled a powerful shot to the back of the net.

Two minutes before that decisive moment in the game, Colmcille had scored a goal through Rory Hawkins to level matters. But Abbeylara were determined not to let the league points slip from their grasp and worked hard for the win.

Kevin Smyth posed considerable problems for the Colmcille defence while Nigel Rabbitt kicked over some excellent points and worked tirelessly despite the tight marking. The Abbeylara defence and midfield also performed well.

A pointed free from Rabbitt opened the scoring in the third minute but Colmcille went ahead by two by the ninth minute with Barry McKeon, Rory Hawkins and Cathal McCabe kicking points.

Abbeylara created a few chances but kicked four wides and hit the post twice. They did draw level in the 14th minute through Reece Reilly and further scores from Cathal Lynch and a great Reilly effort edged the home side ahead again in the 19th minute.

Colmcille went on to enjoy a spell of possession and took the lead again in the 29th minute before another free from the boot of Rabbitt just before the break left the sides all square: 0-6 to 0-6.

Abbeylara regained the lead in the early stages of the second half when Kevin Smyth set up Reece Reilly for his third score and Rabbitt followed up with a neat point.

Colmcille remained in contention with Barry McKeon cutting the gap to one in the 39th minute but fine points from Reilly and Rabbitt put Abbeylara in front by three by the 44th minute and the momentum was with them.

Two minutes later Colmcille were back in the game when a mistake allowed Rory Hawkins to fire the ball to the net and shortly after Barry McKeon brought a save out of Abbeylara keeper Gavin Kelly.

Credit to Abbeylara for responding well with Kevin Smyth finding the back of the net to regain the lead for the home side. Another Rabbitt free extended their advantage to four points in the 50th minute but Colmcille closed the gap with Rory Hawkins (free) and Paul McKeon on target.

Rabbitt kicked over two points (one free) as Abbeylara consolidated their grip on the game and their final score was a fisted effort from Kevin Smyth in the 59th minute.

Declan Farrell kicked over a late point for Colmcille but Abbeylara had done enough to secure the victory in the build-up to the county championship.