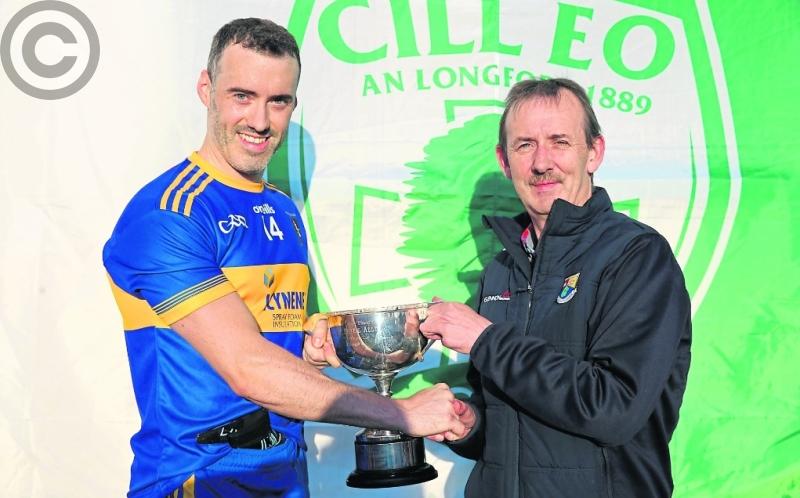 A strong second half performance from Dromard saw them collect the Bertie Allen Cup with a six point win over Longford Slashers in the Reserve Football League 1 Final at Emmet Park, Killoe on Saturday evening last.

Trailing by three points at the break, Longford Slashers managed to reduce the gap to just one in the 37th minute but that was the closest they were to get to Dromard as Diarmuid Masterson inspired his side to a league title triumph.

Masterson was exceptional and kicked over three points in the second half. Padraig Martin also played his part in the win too; the wing-back was involved in the game’s only goal, setting up Conor McGurren in the 44th minute.

That put Dromard ahead by six and they were able to keep that distance between themselves and the Townies.

It was a sluggish first half with point side guilty of some wayward shooting. Slashers also created two goal chances in the first five minutes with Dromard keeper Gavin McNerney denying Peter Lynn in the fourth minute and Sean Clarke’s effort cleared off the line one minute later.

Dromard had opened the scoring with points from Francis McGee and Jamesie Martin. Frees from Andrew Kelly and Robbie Clarke drew Slashers level in the eighth minute. A terrific point from Peter Foy in the 11th minute put Slashers 0-3 to 0-2 ahead but it was the only time in the game that they were to lead.

Frees from Martin and McGee edged Dromard in front again in the 23rd minute. Another Clarke free levelled the game - 0-4 apiece in the 25th minute, but Dromard gained the initiative in the final minutes of the first half. Two points from McGee and one from Cian Mimnagh gave them a three point lead, 0-7 to 0-4, going in at the interval.

A fine Brian Walsh point and another Clarke free brought Slashers to within one - 0-6 to 0-7 - of Dromard in the 37th minute but Niall Sheridan’s side began to get on top and Slashers struggled to get scores when they did enjoy possession.

Points from Mimnagh and Diarmuid Masterson restored Dromard’s three point advantage in the 42nd minute and two minutes later they scored a goal. Padraig Martin did well to win possession, he played the ball to Bernard Sheridan who set up Conor McGurren and he made no mistake finding the back of the net.

Masterson followed that up with a great point to extend Dromard’s lead to seven in the 47th minute, 1-10 to 0-6.

Slashers needed scores and they grabbed two points, including a Clarke converted free in the 49th minute. Good work from Dromard wing-back Dylan McCormack set up John Sheridan for a point to restore their six point lead, 1-11 to 0-9.

Slashers tried hard to get a goal to try to revive their flagging fortunes but just couldn’t. They kicked over two late points while Cian Mimnagh, Peter Reynolds and Masterson kicked over scores for the victors.