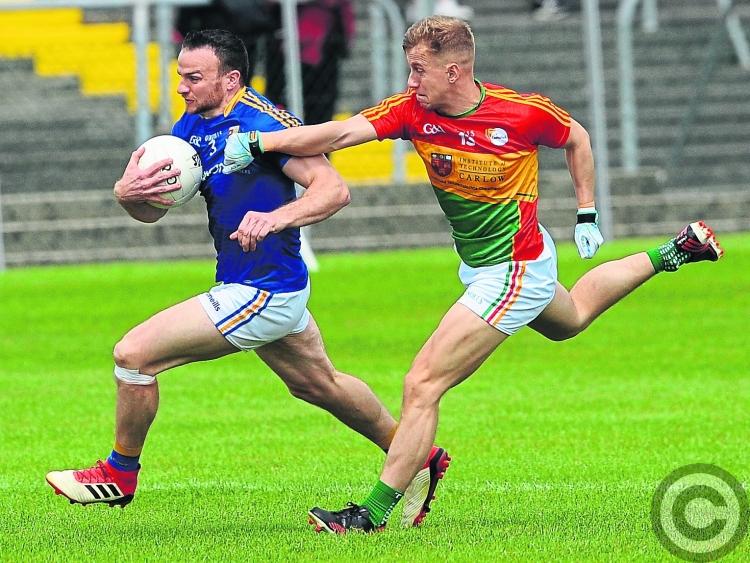 Donal McElligott pictured in action for Longford against Carlow in Round 1 of the All-Ireland Senior Football Championship Qualifiers at Netwatch Cullen Park. Photo: Declan Gilmore

While Longford have a great record in the All-Ireland SFC qualifiers, they are facing a most difficult task against Tyrone in the Round 2 clash at Glennon Brothers Pearse Park on Saturday evening, throw-in 5pm.

Without a number of regulars for the current championship campaign, manager Padraic Davis also had to deal with injuries to Barry McKeon and Liam Connerton.

Thus the team that takes on last year’s beaten All-Ireland finalists Tyrone will be much changed from the squad that ran Kildare so close (1-16 to 1-13) at this same stage of the qualifiers last year.

The terrific championship atmosphere at Pearse Park has produced some great results for Longford down through the years and Davis will be hoping that his highly committed players can spring a shock on this occasion.

They certainly showed a lot of character against Carlow in bouncing back from the setback of losing against Kildare in the Leinster SFC quarter-final replay the previous week.

Crossing the first hurdle in the qualifiers was a good achievement in a satisfying season so far for the new management team and the county are under no pressure now as they enter bonus territory against such highly rated opponents.

While Tyrone produced a disappointing display in the 1-16 to 0-15 defeat against Donegal in the Ulster SFC semi-final a couple of weeks ago they will be strongly fancied to progress on the road to redemption.

Longford, on the other hand, were guilty of shooting 17 wides against Carlow in a poor game at Netwatch Cullen Park and will need to improve greatly on their finishing to have any chance of putting it up to Tyrone.

Having said that, the unpredictable nature of the qualifiers have provided some surprising results in the past and Meath were most unlucky not to beat Tyrone in the opening round last year.

In recovering well from the setback of losing to Longford in the Leinster SFC quarter-final, the Royal county went down by just a single point after extra-time against Mickey Harte’s side.

Tyrone were very relieved indeed to survive in Navan that day and will be wary of the Longford challenge on Saturday evening.

The counties only other previous clash in the qualifiers was also at Pearse Park back in 2011 and while the Ulster side were hard pressed in that Round 2 tie they eventually won by five points, 1-17 to 0-15.

Longford may be understrength at this moment in time but the squad that Padraic Davis is working with are giving everything for the cause of the county.

Scoring 3-15 in the drawn Leinster quarter-final tie against Kildare in producing a great overall display delighted the Longford supporters in Tullamore a few weeks ago.

A shock win almost materialised and while the team in transition are taking another step up in class against Tyrone the midlanders will give it their best shot.

Home advantage is a definite plus and if Longford can execute their gameplan to the best possible effect who knows what might happen.

A high level of intensity will be required for a start against a physically stronger Tyrone outfit who are operating at a different level.

This is the team who demolished Roscommon by the landslide margin of 18 points in the Super 8s last year and who went on to take Donegal down at the Ballybofey fortress, winning by 2-17 to 1-13.

The All-Ireland semi-final against Monaghan was a much closer affair with just a single point separating the sides in the finish.

Tyrone gave Dublin quite a fright in the first quarter of the Sam Maguire decider, racing into a 0-5 to 0-1 lead before conceding a couple of goals which changed the course of the game.

Trailing by 2-7 to 0-6 at the break, Tyrone eventually lost by six points and were generally considered to be All-Ireland contenders this year prior to the defeat against Donegal in the Ulster semi-final.

A black card for probably their most influential player Peter Harte with just ten minutes gone in the first half was a big blow and Tyrone never really got going in producing a poor display by their high standards.

Tiernan McCann will be suspended for showing a total lack of discipline in lashing out at Donegal opponent Stephen McMenamin but Tyrone will manage without him, such is the strength of their squad.

Apart from Peter Harte, their other main men are Colm Cavanagh, Mattie Donnelly, Cathal McShane, Richard Donnelly and Kieran McGeary along with a number of other quality players too  numerous to mention.

Despite losing to Kerry and Mayo and drawing with Roscommon in their first three games in the National League this season, Tyrone then went on a great run that almost yielded a place in the Division 1 final.

Four wins in a row against Monaghan, Cavan, Dublin (a most significant result at Croke Park) and Galway was impressive form going into the championship.

Derry and Antrim were subsequently beaten in the earlier rounds in Ulster before the blip against Donegal but Tyrone are the red-hot favourites to get back on track in the qualifiers.

Mickey Harte, the manager of Tyrone since 2003, will be demanding a big improvement with the expectation that his side will still reach the Super 8s through the back door.

While Longford got the toughest draw in the next stage of the qualifiers they will take on the might of  Tyrone in the belief that anything is possible!