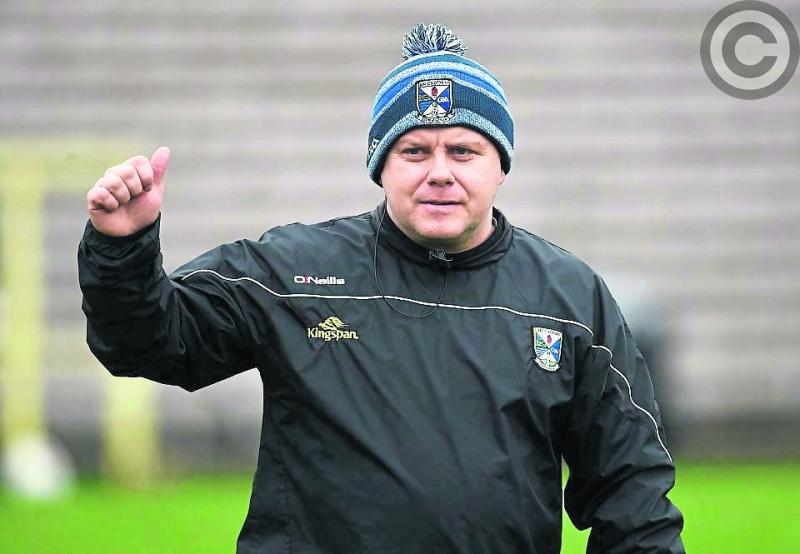 Former Mullinalaghta manager Mickey Graham, now in charge of the Cavan senior football squad who take on Donegal in the Ulster SFC final in Clones on Sunday

It’s been the best part of 20 years in the making but for Cavan and the man tasked with leading the Breffni Blues back to footballing immortality, this Sunday’s Ulster Football Final with Donegal can’t come quick enough.

Mickey Graham has seen and done most things both as a player and now as a manager of rapidly increasing repute. His pedigree speaks for itself. Having steered Mullinalaghta to a Leinster Club title success at the back end of last year, the Cavan Gaels clubman is eyeing yet another famous giant-killing act by slaying the Anglo Celt Cup holders in Clones.

Wins over Monaghan in the first round and then Armagh, after a replay,  in a brilliant display of what many critics dubbed ‘total football’ has quite rightly buoyed public sentiment across the county.

But Graham is no stranger when it comes to the art of keeping affairs low key, a virtue he displayed with discerning poise when contacted by the Leader ahead of Sunday’s title showdown against Donegal.

“I suppose it’s a quick enough turnaround from the last game and it’s really been a case of heads down and feet on the ground,” he said.

“Your just hoping that you can get enough work done in a short space of  time but we would be happy enough with how things are going.”

And why wouldn’t he be? The successes over Monaghan and more recently Armagh have been built on Graham’s overriding belief as to how championship football should be played-free flowing and insatiably easy on the eye.

But there’s also a steely side to the Breffni men, reminiscent in many ways to the tenacity and never say die attitude he managed to instil in his former Mullinalaghta charges.

“It’s not really about that,” came the rather brusque reply when the mention of his alliance with the current Longford senior kingpins was put to him.

“It’s the players who will make the difference.

“They are the ones who can influence things and see how the game is developing and if they go out there and show their true potential that’s all that matters.”

The fact he and his team of selectors, which also includes former All-Star and Clonguish Senior football team coach Dermot McCabe, can call upon a virtually fully fit panel of players will certainly aid that cause.

It’s a bonus many of those in the blue and white camp hope will bring with it the richest of dividends on Sunday afternoon.

Not that Graham was keen to wade into that debate when the issue was broached.

“I think more so there is a feeling of relief in Cavan that we have got our foot in a final because it has just been so long.

“You know, 2001 that’s 18 years and it’s just nice for people, especially the younger generation to experience that.

“At the end of the day I think Cavan people are realistic and if we go out on Sunday and do our best, that's all anyone can ask for.”

The task confronting those under his wing is stark. Declan Bonner’s side were at their masterly best when fending off the challenge of Tyrone in their Ulster semi-final dual almost two weeks ago.

Paddy McBrearty and Michael Murphy are two household names who would walk into most, if not every starting fifteen in the country.

Add in the likes of the inside forward Jamie Brennan, who slotted over 1-3 against Tyrone last time out as well as fellow forward Michael Langan and the threats posed by the defending Ulster champions become ever more discernible.

“I think it’s all about strengths with Donegal,” said Graham.

“They have quality all over the field. A lot of young lads have come through, made a difference and when you factor in their pace and power it’s some combination.

“They had a setback when they got relegated to Division Two but they soon got back to Division One and in my view, they would be among the top four or five teams in the country at the minute.

“There’s no doubt Sunday will be a huge ask and it’s without doubt our biggest game all year.”

That said, Graham by his very nature is a winner.

His track record both on the football field and off it is there for all to see.

It's a mindset he, no doubt, will be looking to engrain into his Cavan squad ahead of Sunday's eagerly anticipated encounter.

“The target from the start was always to try and win our first round game as we had only won three championship games in ten years,” he said.

“We set the target of beating Monaghan because in previous years we hadn’t really shown anything.

“From then, it was really a case of seeing how we could build momentum from that, back up that result and try to develop a team at the same time.

“But as  a player these are the sort of games you dream of.”

If the canny Graham gets his way, come Sunday evening that dream might just become a mind-blowing reality.