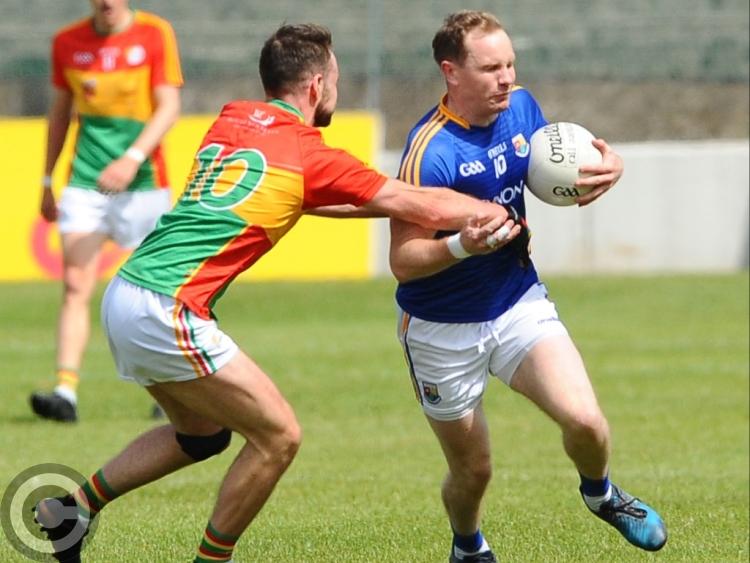 Gary Rogers pictured in action for Longford against Carlow opponent Diarmuid Walshe in Round 1 of the All-Ireland SFC Qualifiers at Netwatch Cullen Park on Sunday last. Photo: Declan Gilmore

It took Longford a considerable length of time to assert their unquestionable superiority over poor Carlow in Round 1 of the All-Ireland SFC Qualifiers but they eventually pulled away to win with considerable ease in the finish at Netwatch Cullen Park on Sunday last.

From the moment James McGivney scored the opening goal for Longford in the 11th minute of the first half it was clearly obvious that Carlow were there for the taking as they struggled to compete in the absence of three key players.

Regular midfielders Brendan Murphy and Sean Murphy were both suspended while injury ruled out their top forward Paul Broderick but the home side somehow managed to remain in contention for quite a while.

That was mainly due to some very poor finishing by Longford who were guilty of shooting a total of 17 wides during the course of this dour battle, nine of which were registered in the first half.

Leading by 1-5 to 0-5 at the break it was still a tight enough contest in the early stages of the second half with defender Padraig McCormack coming to Longford’s rescue with a couple of great catches while Carlow also shot a couple of bad wides.

Then came a decisive point from Gary Rogers who landed a terrific long range effort in the 44th minute and while Diarmuid Walshe (free) replied for Carlow the balance of power began  to swing firmly in favour of Longford with the advantage of the wind.

A foul on influential substitute Joseph Hagan yielded a free that was converted by Daniel Mimnagh in the 51st minute and after James McGivney fired over a very good point the lively young Hagan then got his name on the scoresheet with a fine strike.

Frees were then exchanged between David McGivney and Diarmuid Walshe (the last score for Carlow in the 59th minute) and soon after to the amazement of the attendance a perfect point from Joseph Hagan was not signalled by the umpires with the linesman on that side of the pitch apparently suggesting a square infringement of some sort.

But it did not matter as Longford were in a comfortable six points lead (1-10 to 0-7) at that stage and scored a second goal when defender Patrick Fox joined the attack in shooting to the net in the 69th minute after receiving the perfect pass from Michael Quinn in a well-worked move.

The scoring was completed with a point from midfielder John Keegan in the third minute of stoppage time and Longford can now look forward to a home match against Tyrone in Round 2 of the All-Ireland Qualifiers on Saturday 22 June.

Longford have always embraced the back door scenario with a lot of enthusiasm and you could certainly not fault the work rate of the players against Carlow. It must be said that the support play was effective in putting the pressure on the opposition but it was so frustrating to miss so many chances.

Definitely better in most positions on the pitch and particularly so in such a resolute defence splendidly marshalled by Donal McElligott and Padraig McCormack, Longford recovered well from the bitter disappointment of the defeat against Kildare in the Leinster SFC quarter-final replay the previous week.

Manager Padraic Davis will be pleased with a win in the championship which is always a significant boost regardless of the opposition. The absence of a number of players has been well documented and Davis had to deal with another blow for the game against Carlow as injury ruled out Barry McKeon.

Andrew Farrell replaced McKeon at centre-half-forward and Longford got off to a good start with a point from a free converted by David McGivney in the 2nd minute.

Carlow hit back with a cracking point from Diarmuid Walshe in the 10th minute but conceded a crucial goal moments later. Darragh Doherty sent wing back Colm P Smyth racing through and his fisted pass across the face of the goalmouth reached James McGivney who found the back of the net at the second attempt after hitting the post.

There was then a quick exchange of points between Smyth and Walshe and Carlow scored again in the 17th minute through a fine effort from full-forward Darragh Foley.

The gap was closed to the minimum (1-2 to 0-4) when Foley fired over a free in the 22nd minute before another Longford point followed from a David McGivney free.

Paddy Collum then produced a vital save to keep out a goal attempt from Carlow defender Brendan Kavanagh in the 28th minute but Longford regained the upper hand with two excellent points in quick succession from left-half-back Darren Quinn.

Jordan Morrissey shot over the bar to give Carlow some hope for the second half with just the James McGivney goal separating the sides at the break but Longford were generally in control on the changeover.

Although the wide count continued to mount up the level of performance improved as a further 1-6 was added to the Longford tally to emerge victorious by the wide margin of ten points in the end and they now take on the might of   Tyrone.

The best Carlow could manage in the second half was a couple of points from frees and they more or less threw in the towel for the final quarter of the game. A sad surrender from a county that scored a sensational win over Kildare in the Leinster Championship last year to capture the attention of GAA followers all over the country.

Defender Darren Quinn surged forward to fire over a couple of cracking points in the closing stages of the first half to give Longford the edge at the break. The next score  for the visitors did not materialise until the 9th minute of the second half, a real inspirational long range strike from Gary Rogers, and from there on Carlow were struggling badly.

Against stronger opposition Longford would have been in serious trouble after kicking a total of 17 wides. It was most frustrating to watch and particularly so in the first half when Carlow were there for the taking but only trailed by 1-5 to 0-5 at the break.

Longford, in a  determined bid to bounce back from the disappointing defeat against Kildare the previous week, went in search of a good start and got it when James McGivney scored a goal with 11 minutes gone on the clock.

Wing back Colm P Smyth supplied the pass that led to full-forward McGivney finishing the ball to the net at the second attempt after he hit the post.

Longford never relinquished the lead thereafter despite the poor finishing.

It must be said that the entire Longford team worked very hard to achieve this win but most of the credit has to go to the resolute defence, clearly reflected in the fact that Carlow were restricted  to just four scores from play. Donal McElligott and Padraig McCormack were particularly prominent in the key central positions.

Down referee Ciaran Branagan  was fair in his handling of the game and did not have to make many big decisions  with Longford generally in control.

After playing on three consecutive Sundays, Longford will be delighted for a couple of weeks break to their next championship game against Tyrone in Round 2 of the All-Ireland Qualifiers at Glennon Brothers Pearse Park on Saturday 22 June, throw-in 5pm