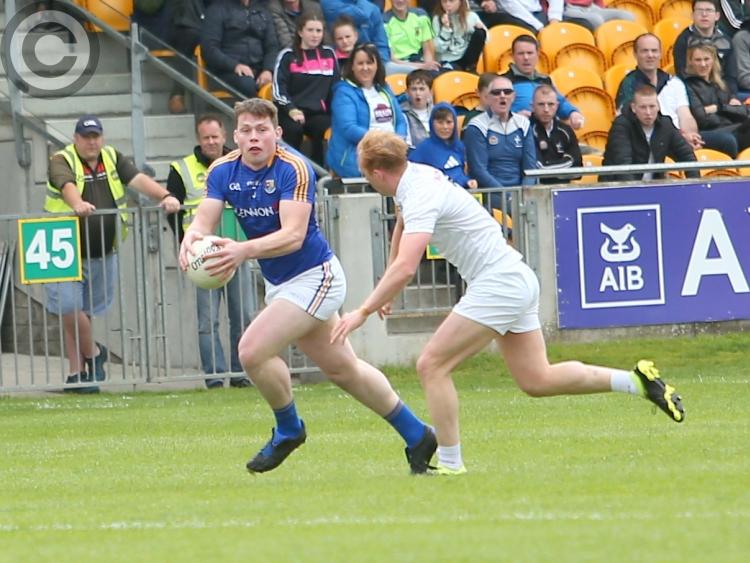 Fortunate to survive in the drawn encounter when they were saved by the upright, Kildare made no mistake at the second attempt in cruising to a comprehensive win over Longford in the Leinster Senior Football Championship quarter-final replay at Bord na Mona O’Connor Park in Tullamore on Sunday last.

Their overall superiority was not reflected on the scoreboard in the first half as they squandered several chances (including a couple of clear-cut goal attempts) and thus had to be content with a slender 1-4 to 0-4 lead at the break.

But Kildare upped the tempo in making good use of the wind advantage on the changeover in pulling right away with the wide margin of 11 points separating the sides in the finish,

While the lilywhites move on to meet All-Ireland champions Dublin in the Leinster semi-final at Croke Park this Sunday, Longford are heading for Netwatch Cullen Park to confront Carlow in Round 1 of the All-Ireland Qualifiers and manager Padraic Davis must now lift the players in the aftermath of this disappointing defeat.

Longford were second best in most positions on the pitch with the lightning pace of Kildare attacker Ben McCormack posing a lot of problems.

From the moment Fergal Conway burst his way through to blast the ball into the roof of the net in the 18th minute the underdogs were facing a real uphill battle in their bid to cause an upset.

To make matters worse, Barry McKeon was forced to retire injured following this major score and nothing really went right for Longford who shot five wides in the first half.

Much improved Kildare were operating at a different level on this occasion and Longford were just not good enough, much to the sheer dismay of their supporters among the attendance of 4,326.

Six of their ten points came from frees with none of the starting six forwards for Longford  managing a score from play during the course of the game.

Landing some great scores, Kildare registered the impressive total of 14 points in the second half and were far too strong for a Longford team hard hit by the absence of a few key players.

Remarkably the first quarter of the contest failed to produce a score with Kildare shooting a few bad wides along with a goal chance that was squandered by Jimmy Hyland in the 14th minute.

Hyland took a step too many in letting the ball slip from his grasp from a few yards out but Longford then created a goal chance, only for Donal McElligott (starting the game at full-back in place of Andrew Farrell) to shoot straight at Kildare keeper Mark Donnellan.

A free was awarded in this same attack with David McGivney getting the first score of the game in the 18th minute but Kildare replied with a goal of immense quality from Fergal Conway who cut through on a penetrating run on his way to planting the ball in the roof of the net.

A good point followed from influential midfielder Tommy Moolick (one of three changes on the Kildare team for the replay) but Longford hit back to close the gap with a brace of scores from David McGivney - the first from a free in the 25th minute and the Mullinalaghta man was then on target from play in the 28th minute.

Then came another goal chance for Kildare with David Slattery shooting wide when looking all set to find the net in what was a very lucky escape for Longford.

Kildare finished the first half strongly with three points in a row through Adam Tyrrell (free and play) and Neil Flynn (free) but just before the break Longford substitute Joseph Hagan landed a glorious strike from near the sideline to give his side a lift going into the second half.

The gap was closed to two points with just a minute gone on the changeover when Andrew Farrell (who replaced the injured Barry McKeon) shot over the bar when a goal was on in a well-worked move.

But Kildare were in no mood to let the game slip from their grasp and proceeded to enjoy a brilliant spell that yielded six points in a row between the 37th and 43rd minutes.

While Longford replied with a point apiece from wing back Darren Quinn (who fisted the ball over the bar) and midfielder David McGivney (free), it only proved to be a brief respite.

Kildare quickly regained the upper hand when the always dangerous number 10 David Slattery broke through to shoot over the bar when he might have gone for a goal in the 48th minute.

And three more points followed from Neil Flynn (free), Tommy Moolick (a great long range effort) and Ben McCormack to put the issue beyond all doubt.

Then came a fourth free converted by David McGivney, only for Kildare to go on another scoring spree in adding four further points to their emphatic tally through Neil Flynn (free), substitute Niall Kelly, Tommy Moolick and Keith Cribben.

It proved to be a very demoralising second half for Longford with their key players failing to make the same sort of major impact in running Kildare so close the previous week.

Michael Quinn fired over a couple of late consolation scores from close range frees and the pressure is now on Longford who will need to regroup quickly for what could be a tricky task away to Carlow in the qualifiers on Sunday next, throw-in 3pm.

The impressive manner in which Kildare opened up in the second half to fire over the terrific tally of 14 points (ten from play) and there was just no stopping the rampant lilywhites when in full flight.

Unfortunately the key players on the Longford team failed to repeat the excellent displays that almost yielded a shock win over Kildare in the thrilling drawn game the previous week.

When Longford closed the gap to just two points after substitute Andrew Farrell shot over the bar in the early stages of the second half there must have been some doubt in the minds of the Kildare players who have developed a habit of pressing the self destruct button.

But there was no need for their supporters to worry as six points in a glorious spell between the 37th and 43rd minutes put Cian O'Neill's side in complete control of the game.

Ben McCormack was a constant threat in the Kildare attack with his lightning pace posing a lot of problems while midfielder Tommy Moolick (who did not start in the drawn game) also figured most prominently, apart from the fact that he scored three points. Another menace in the forward division was David Slattery.

Tyrone referee Sean Hurson handled the game efficiently with his task made easier by the overall superiority enjoyed by the slick Kildare team.

Kildare move on to meet All-Ireland champions Dublin in the Leinster semi-final this Sunday, June 9, with Longford in action on the same day against Carlow in Round 1 of the All-Ireland Qualifiers at Netwatch Cullen Park.

Manager Padraic Davis needs to lift his players quickly in the aftermath of the disappointing defeat in Tullamore on Sunday last and  it remains to be seen if they can get a run through the back door. Let's hope so!