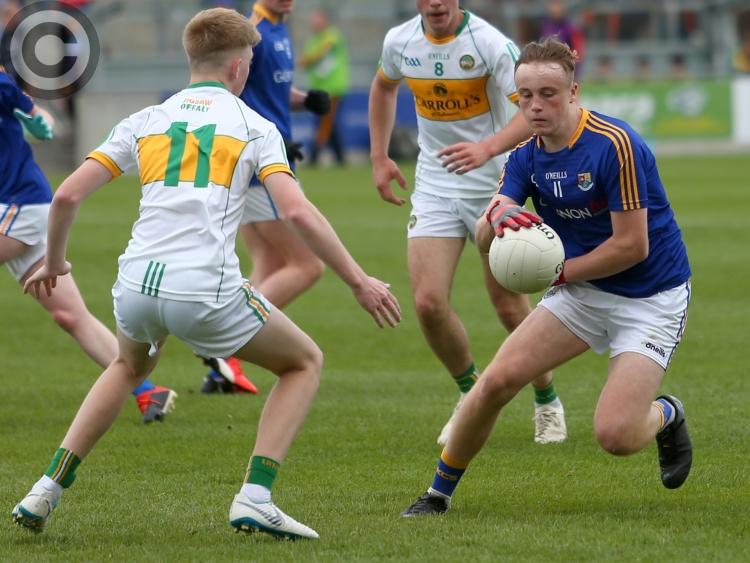 The Longford U-17 footballers gained some consolation for the bitter disappointment of failing to qualify for the knockout stages of the Leinster Minor Championship with a good win over Offaly in the first round of the shield competition at Bord na Mona O’Connor Park in Tullamore on Sunday last.

The victory for the Shield title holders came at a cost as midfielder Richard Prior was sent-off in the 44th minute after receiving a  straight red card. It was the linesman that alerted referee Keith O’Brien to the incident that led to Prior’s dismissal with Offaly midfielder Ryan Strong receiving a yellow card.

The turning point in the game came two minutes before that when Longford scored the only goal with Aaron Farrell on target. At that stage Offaly had got back into the game and were in front by a point, 0-7 to 0-6. The goal gave Longford the momentum and despite losing Prior they finished well.

It was a scrappy affair littered with mistakes and some poor shot selection. Longford’s Darren Moffett was excellent in defence, Conor Leonard done well in midfield while Tiarnan Hussey and Keelin McCann caused problems throughout for the Offaly defence.

Darren Moffett won possession in the 9th minute and the ball was eventually played to McGann but he drove his low shot wide.

Both sides were then guilty of kicking poor wides and the next score didn’t come until the 18th minute; Duggan with a fine point. Minutes later McGann was fouled again and Hussey converted the free.

Morgan Tynan got a much needed point for Offaly in the 25th minute and Delaney followed that with a pointed free but just before half-time Conor Leonard was fouled and Duggan fired over the free. The last score of the first half was a pointed free from Delaney that left Offaly trailing by two at the break.

Offaly started the second half brightly and were level in the 32nd minute though Delaney could have got a goal but blasted the ball over the bar. In the 41st minute they went ahead for the first time since the third minute.

The lead only lasted a minute with Longford taking a quick free which found Aaron Farrell and he made no mistake in finding the back of the net.

Two minutes later Longford were dealt a blow when Richard Prior was sent-off.

Try as they might Offaly couldn’t make use of the numerical advantage. Substitute Ciaran Scanlon’s powerful shot was tipped over the bar by Offaly keeper Loughlin Walsh in the 48th minute and Jack Duggan and Tiarnan Hussey followed up with frees to clinch the win for Longford and a place in the Leinster shield semi-final against Louth at Glennon Brothers Pearse Park on Saturday 22 June.