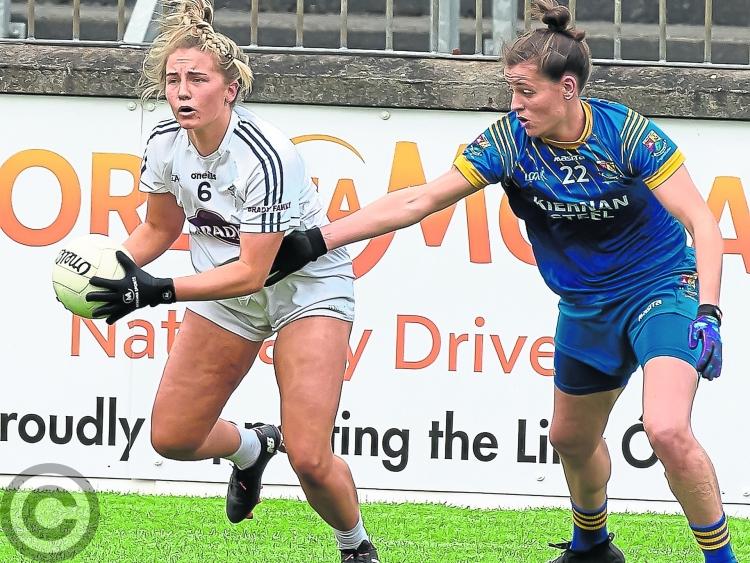 Keri Harmon pictured in action for Longford against Kildare in the Ladies Football Leinster Intermediate Championship first round game in Newbridge on Saturday last.

Despite staging a determined late comeback with the referee playing eleven minutes of injury time, the Longford ladies had to settle for second best against Kildare in the Leinster Intermediate Football Championship first round clash in Newbridge on Saturday last.

It was Kildare who opened the scoring with Ellen Dowling pointing after four minutes of action before Aoife Darcy leveled matters moments later and then Michelle Farrell shot over the bar to put Longford in front.

Trina Duggan then surged forward sixty yards in a Kildare attack before converting to level matters for a second time.

Aisling Greene then scored a goal for Longford and exchanging scores Neasa Dooley and Greene ensure the difference would remain at three before Lara Curran and Dooley reduced the deficit to one on the quarter hour mark.

Hoping to stay one step ahead of Kildare, Longford again looked to add to their tally and it was Keri Harmon who was on hand to score a goal. Blasting past the gathered Kildare defenders, Harmon found the net with the help of a deflection beyond opposing keeper Cliodhna Malone.

Within a minute it was Dooley who again improved the Kildare effort as Duggan was again on hand to make a vital interception deep into her own half. Again striding sixty yards the wing back found Mikaela McKenna who spotted the onrushing Dooley in space and she shot to the net.

This began a glorious nine minute spell for Kildare. Hitting 2-3 in that time without reply Kildare found themselves go from a one point deficit to a five point advantage. In addition to Dooley’s 17th minute goal Kildare added points through Dowling (2) and Ciara Wheeler before captain Grace Clifford got their second goal.

With half-time approaching, a shell shocked Longford were looking to regroup and points from Aisling Greene and Anna McDonnell ensured that the deficit would be down to three at the break.

On the restart again Kildare looked to mark out their intent and with points from McKenna (2), Dooley and Curran the home side found themselves seven clear.

But Kildare were then reduced to 14 players when Rachel Cribbin received a yellow card and was sin binned for ten minutes.

Despite this setback Kildare refused to let the temporary numerical disadvantage get them down and an exchange of points from Aoife Rattigan and Kara Shannon ensured to maintain the seven point advantage before Curran, McKenna and Orlaith Sullivan extended this to ten before Cribbin returned to the action.

With a final goal from Longford’s Michelle Farrell on the stroke of the regulation sixty minutes  it looked like Kildare would run out comfortable victors but Longford ensured that they were going to make Kildare sweat for this victory.

With eleven minutes of injury time Longford added further points from Aoife Darcy and Mairead Reynolds as Kildare were camped into their own defence determined not to leak another goal.

Kildare won by five points in the finish in advancing to meet Wexford in the Leinster semi-final while Longford, minus a few players due to the Leaving Cert exams, must now wait for the games in the All-Ireland Intermediate Championship Series.