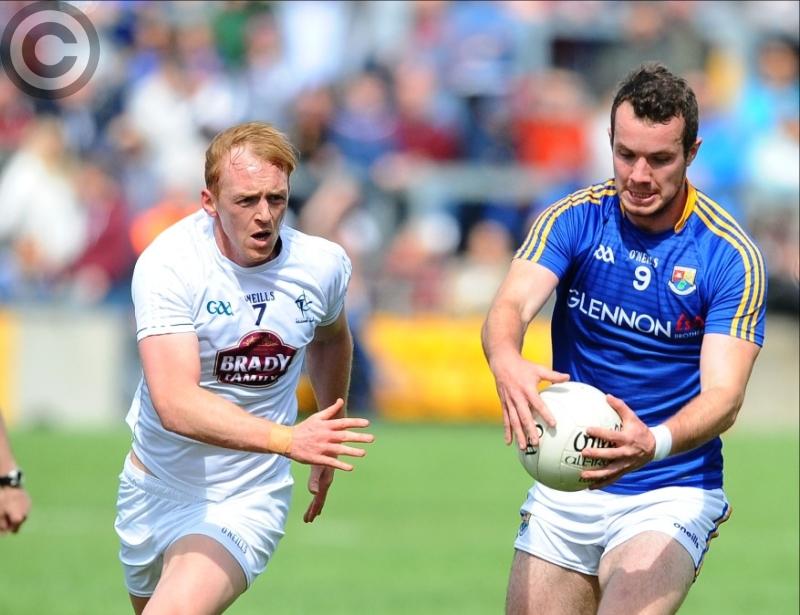 David McGivney on the ball for Longford in evading the challenge of Kildare opponent Keith Cribbin. Action from the drawn Leinster SFC quarter-final on Sunday last. Pic: Declan Gilmore

While Longford survived to fight another day in this year’s Leinster Senior Football Championship, the general opinion is that they missed a glorious opportunity of beating Kildare in a tense thriller at O’Connor Park in Tullamore on Sunday last.

Seven points behind at one stage in the second half, gutsy Longford showed a lot of courage and character to gradually close the gap and were denied a dramatic last gasp winning score when a shot from James McGivney hit the upright in the fourth minute of stoppage time.

It was a very lucky escape for Kildare and the sides were still deadlocked after extra-time in a remarkable quarter-final clash that produced the tremendous total of 40 scores.

The eagerly awaited replay is fixed for the same venue on Sunday next (3pm) to determine who moves on to meet the All-Ireland champions Dublin in the Leinster semi-final at Croke Park on Sunday June 9.

Back in action for Longford will be Donal McElligott who was suspended for the drawn match and his return is a considerable boost in the bid to spring a surprise against a Kildare team who almost pressed the self destruct button after looking in control.

The eventual losers will be heading in a different direction with Carlow (well beaten by Meath last weekend) providing the opposition in the first round of the All-Ireland Qualifiers at Netwatch Cullen Park on Sunday June 9, throw-in 3pm.

The driving force of Michael Quinn, the immense work rate of Daniel Mimnagh and the ability of James McGivney to consistently land some cracking long range points kept Longford in contention against Kildare and the underdogs will believe that they can succeed at the second attempt.

The  curtain-raiser at O’Connor Park on Sunday is the Leinster Minor Football Shield game between Longford and Offaly (1.15pm).