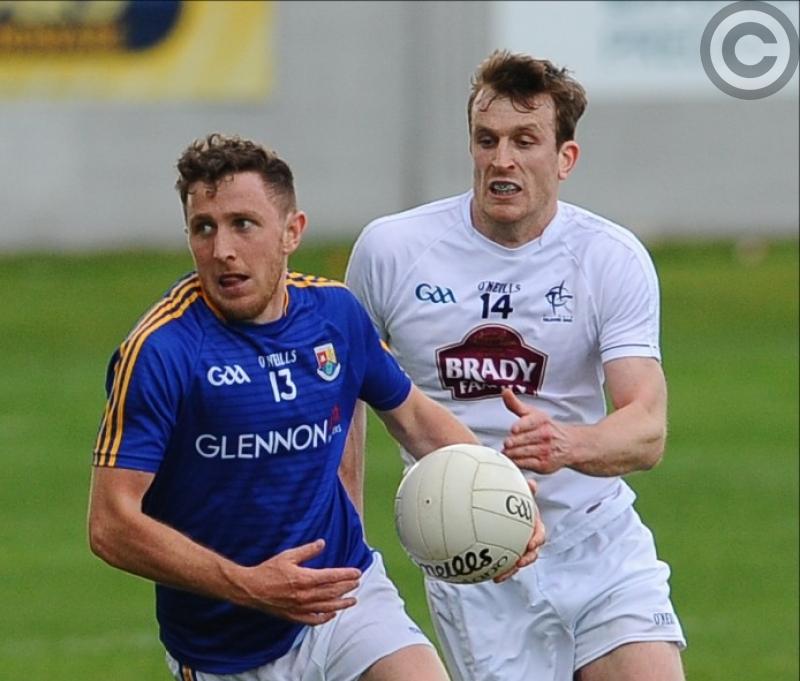 Daniel Mimnagh on the ball for Longford ahead of Kildare opponent Paddy Brophy. Action from the drawn Leinster SFC quarter-final at O'Connor Park on Sunday last. Pic: Declan Gilmore

Seven points adrift at one stage in the second half and who appeared to be fighting a losing battle, Longford showed tremendous character to wipe out the deficit and came so close to causing a big upset against Kildare at Bord Na Mona O’Connor Park in Tullamore on Sunday last.

With the sides deadlocked (2-14 to 1-17) in the fourth minute of stoppage time, a shot from James McGivney hit the upright as the Longford bravehearts were denied a dramatic last gasp winning point in a championship thriller.

The tension was almost unbearable and while extra-time failed to resolve the issue with a goal from Michael Quinn keeping Longford in contention the post ironically saved Kildare again close to the finish of this remarkable game.

The double bill in Tullamore on Sunday last (Laois beat Westmeath in the curtain-raiser) attracted the total attendance of 9,375 and the Longford supporters almost witnessed a shock win over a strongly fancied Kildare side.

Missing a number of players for different reasons and also minus the suspended Donal McElligott (who will be back for the replay), there was a further blow when Liam Connerton was unable to play due to a hamstring injury and he was replaced in the attack by Darragh Doherty.

As it turned out it was senior championship debutant Doherty who scored the goal in the 21st minute of the first half to leave Longford leading by 1-7 to 0-7 but Kildare came storming back to take control.

The underdogs suffered a significant setback just before the break when Adam Tyrrell finished the ball to the net after Paddy Collum had parried a shot from David Slattery and the lilywhites ended up 1-12 to 1-8 ahead at half-time.

Kildare extended their advantage to seven points (1-15 to 1-8) with three more scores through Tyrrell, substitute Conor Hartley and defender David Hyland in the early stages of the second half and there appeared to be no way back for Longford.

But they somehow found the energy to enjoy a new lease of life in outscoring the rattled opposition by 1-6 to 0-2 during the remainder of normal time.

Substitute Mark Hughes, who was just brought on, scored the goal in the 54th minute that changed the course of the game and Longford were unlucky not to emerge victorious in this highly entertaining quarter-final clash.

It was a heroic display by all concerned and on the evidence of what was witnessed in the drawn encounter Longford will not fear Kildare in the replay in their bid to reach the last four in Leinster for the second year in succession.

With the advantage of the wind in the first half Kildare got off to a flying start to lead by 0-4 to 0-0 after just eight minutes with commanding full-back David Hyland drifting out to the middle of the field to fire over two of the early points, the second from a mark.

Ben McCormack and Adam Tyrrell were also on target but Longford gradually settled down to shoot four points in a row between the 10th and 15th minutes - three from David McGivney frees with brother James landing his trademark long range strike.

The sides then shared a further six points with the always dangerous corner-forward Tyrrell (2) and Fergal Conway on the mark for Kildare while James McGivney (2) and Daniel Mimnagh replied for Longford.

Deadlocked at 0-7 apiece a well-worked move involving Gary Rogers, Mimnagh and Michael Quinn ended up with Darragh Doherty shooting to the net from close range and that was really putting it up to the red hot 2-7 favourites.

But Kildare did not panic and dominated the remainder of the first half in adding another 1-5 to their tally, the goal coming from Tyrrell who also converted a free just before the break to leave his side four points in front at half-time.

The other scores were registered by Eoghan O’Flaherty (free), Ben McCormack, Paddy Brophy and Fergal Conway while all Longford could manage in return was a point from Daniel Mimnagh whose workrate was immense throughout this pulsating game.

When Kildare went seven points up early in the second half it looked all over as a contest but this Longford team, under the driving force of their inspirational manager Padraic Davis, are made of stern stuff and just refused to accept defeat.

A tremendous long range effort from James McGivney near the sideline started the comeback, even though Longford lost full back Andrew Farrell was dismissed for a black card offence in the 50th minute.

Further points followed from David McGivney (free) and John Keegan before replacement  Mark Hughes made an immediate impact to score the second goal for Longford.

That left just the minimum of margins separating the sides (1-15 to 2-11) but the pressure was eased on Kildare with Adam Tyrrell converting frees in the 58th and 63rd minutes.

Gutsy Longford, with the aid of the wind, finished the stronger with three fine points in a row through Mark Hughes, Barry McKeon and another substitute Aidan McElligott to leave it level by the 70th minute.

James McGivney almost won it with the shot that hit the upright deep into stoppage time but it was Kildare who made a great start in the extra-time period with three points in quick succession from David Hyland (when a goal was there for the taking), substitute Jimmy Hyland and Ben McCormack.

There was some respite for Longford with another great score from James McGivney, only for Jimmy Hyland to reply with a point for Kildare who were looking the likely winners at this stage.

But there was another twist in this gripping tale when the generally prominent Michael Quinn pounced on the loose ball to shoot to the net just before the half-time whistle in extra-time to level matters yet again and that was the way it remained with both sides having chances to claim the victory in a frantic finish.