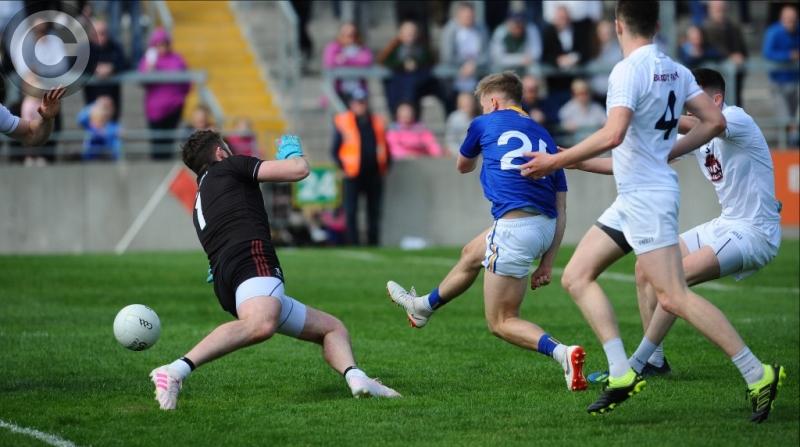 Darragh Doherty scoring the first half goal for Longford against Kildare in the Leinster SFC quarter-final clash in Tullamore. Photo: Declan Gilmore

Seven points adrift at one stage in the second half and who appeared to be fighting a losing battle, Longford showed tremendous character to wipe out the deficit and came so close to a famous win over Kildare at Bord Na Mona O’Connor Park in Tullamore on Sunday.

With the sides deadlocked (2-14 to 1-17) in the fourth minute of stoppage time, a shot from James McGivney hit the upright as the Longford bravehearts were denied a dramatic last gasp winning point in a championship thriller.

The tension was almost unbearable and while extra-time failed to resolve the issue with a goal from Michael Quinn keeping Longford in contention the post ironically saved Kildare again close to the finish of this remarkable game.

The double bill in Tullamore on Sunday last (Laois beat Westmeath in the curtain-raiser) attracted the total attendance of 9,375 and the Longford supporters almost witnessed a shock win over a strongly fancied Kildare side.

Missing a number of players for different reasons and who also were minus the suspended Donal McElligott (who will be back for the replay), there was a further blow when Liam Connerton was unable to play due to a hamstring injury and he was replaced in the attack by Darragh Doherty.

As it turned out it was senior championship debutant Doherty who scored the goal in the 21st minute of the first half to leave Longford leading by 1-7 to 0-7 but Kildare came storming back to take control.

The underdogs suffered a significant setback just before the break when Adam Tyrrell finished the ball to the net after Paddy Collum had parried a shot from David Slattery and the lilywhites ended up 1-12 to 1-8 ahead at half-time.

Kildare extended their advantage to seven points (1-15 to 1-8) with three more scores through Tyrrell, substitute Conor Hartley and defender David Hyland in the early stages of the second half and there appeared to be no way back for Longford.

But they somehow found the energy to enjoy a new lease of life in outscoring the rattled opposition by 1-6 to 0-2 during the remainder of normal time with substitute Mark Hughes, who was just brought on, scoring the goal that changed the course of the game and so spirited Longford were unlucky not to emerge victorious in this highly entertaining quarter-final clash.