Big Match Preview: Longford take on Kildare in the hope of causing upset in the championship 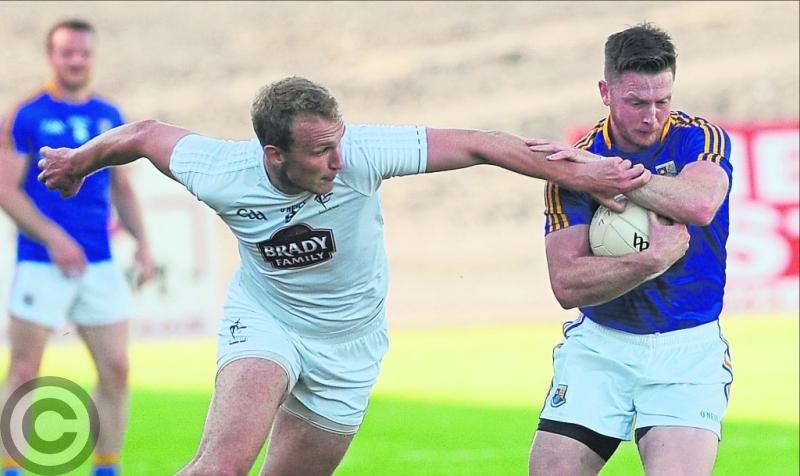 Michael Quinn on the ball for Longford in this tussle with Kildare opponent Tommy Moolick. Action from last year's All-Ireland SFC Round 2 Qualifier. Picture: Declan Gilmore

Missing a few key players for different reasons and who are obviously facing a very tough task in their quest to cross the first hurdle in the championship, Longford will still be hoping to cause an upset against Kildare in the Leinster quarter-final clash at Bord Na Mona O’Connor Park in Tullamore this Sunday, throw-in 4pm.

It has been a difficult first season in charge for the county senior football manager Padraic Davis who deserves a lot of credit for guiding the understrength squad to survival in Division 3 of the National League with a number of new players getting the opportunity to stake a claim for a place on the team for the championship campaign.

While taking on Kildare is a significant step up in class against one of the stronger counties, Longford will give it their best shot against the Division 2 team who may be lacking in confidence in the aftermath of the fierce struggle to beat Division 4 opponents Wicklow in the opening round of the Leinster Championship a couple of weeks ago.

Kildare appeared to be cruising to a comfortable win when they led by six points on the hour mark but a Wicklow goal changed the course of the game and Cian O’Neill’s rattled side were hanging on in a frantic finish at Netwatch Cullen Park.

The narrow margin of just two points (0-15 to 1-10) separated the teams at the final whistle and Kildare almost bottled it for the second year in succession after their sensational setback in the Leinster quarter-final against Carlow at O’Connor Park last season.

What happened against Wicklow was a loud and clear wake up call for a county with a lot of potential but who have a habit of pressing the self destruct button.

Having said that, the  benefit of having played a game in the championship will surely stand to Kildare but their supporters will be demanding a major improvement from a team who produced their true potential on a remarkable run through the back door to eventually end up in the last eight of the 2018 All-Ireland Championship.

Wins over Derry, Longford, Mayo (in the Newbridge or nowhere saga) and Fermanagh put Kildare into the Super 8s and after running Monaghan (0-15 to 1-10) and Galway (0-19 to 0-16) very close the lilywhites were left with nothing but pride to play for when they also lost to Kerry in Killarney on a 3-25 to 2-16 scoreline.

The magnificent triumph over Mayo in a high scoring thriller (0-21 to 0-19) in Newbridge was one of the highlights of the GAA summer so will the real Kildare side stand up in the heat of the championship battle in Tullamore on Sunday next.

The current absence of outstanding attacker Daniel Flynn (nominated for an All-Star award last year) is a big blow.

But there is some serious talent coming through, clearly reflected in Kildare’s terrific achievement in winning the inaugural All-Ireland U-20 Championship title last season with current senior corner-forward Jimmy Hyland collecting the Eirgrid footballer of the year award.

Longford (with Denis Connerton at the helm) will point to the fact that they could have beaten Kildare in Round 2 of the All-Ireland qualifiers at Glennon Brothers Pearse Park last June, losing narrowly by 1-16 to 1-13 in a tense and tight finish, but a lot of changed since then.

Diarmuid Masterson, Sean McCormack, Barry Gilleran and Peter Foy (who all featured against Kildare in the 2018 championship clash) decided to retire from the tough demands of inter-county football after giving great service for many years.

Gallagher fired over two points on that occasion and the powerful midfielder (heading to USA for a short spell) is a major loss after playing a massive role in the National League this season.

Also missing at this moment in time is Rian Brady who did not commit to the county this year with his intention to travel to the  United States. Injury prevented Brady from playing against Kildare in the 2018 qualifiers while also ruled out in the game was the suspended James McGivney.

On the subject of suspension, Longford  were unsuccessful in appealing the harsh red card that another Mullinalaghta man Donal McElligott received in the closing stages of the National League game against Westmeath in Mullingar at the end of March.

In yet another setback Longford will be minus their captain for the championship showdown  against Kildare and the odds are really stacked against them on Sunday in the double bill of Leinster SFC quarter-finals with Westmeath and Laois clashing in the curtain-raiser (2pm).

Already without six members of the team that started against Kildare last year - Masterson, Gallagher, Berry, Reynolds, Smyth and Sean McCormack - Longford can ill afford to be missing McElligott.

There is some good news in that Padraig McCormack is back in action after a lengthy injury absence and he joins what is left of the team that took on and almost beat Kildare in the qualifiers last year - notably Paddy Collum, Patrick Fox, Michael Quinn, Donal McElligott, Barry McKeon, Daniel Mimnagh, David McGivney and Liam Connerton.

Andrew Farrell and Darren Quinn were brought on in the closing stages of that electric evening in Pearse Park in front of the 6,000 attendance with the suspended James McGivney not involved.

McGivney generally rises to the big occasion as he did (firing over four points) when Longford scored a memorable 0-16 to 0-14 win over Meath at this same stage of the Leinster championship twelve months ago.

While it is hard for Padraic Davis to build on that significant success in the absence of several regulars the experienced players still there will be driving Longford on against Kildare in the hope of springing a surprise.

Towering midfielder Kevin Feely is very much the main man on the Kildare team and he will be hard stopped while dangerous forwards Adam Tyrrell, Eoghan O’Flaherty and Ben McCormack clocked up 11 points between them in the nervous win over Wicklow.

It is interesting to note that Tyrrell, O’Flaherty and McCormack did not feature against Longford in the qualifiers last year while injury prone Feely was only brought on in the 68th minute and made a vital impact.

Flynn and Moolick did not start against Wicklow but were introduced during the course of the second half, underlining the overall strength of the Kildare squad even without such talented forwards in the class of Daniel Flynn and Niall Kelly.

But all the pressure is on Kildare who reached the Leinster Final in 2017 in producing a decent display in the nine points defeat (2-23 to 1-17) against Dublin in the title decider.

That progress came to a sudden halt last season when they somehow suffered a shock defeat against Carlow and they now return to the scene of the crime in Tullamore as the firm favourites to make amends against a Longford team in transition.

The prize for the eventual winners is a meeting with four-in-a-row All-Ireland champions Dublin or underdogs Louth in the Leinster semi-final at Croke Park on Sunday June 9.

While the general opinion is that Kildare will beat Longford it must be said that Padraic Davis and his players have to believe in their ability to prove the pundits wrong.