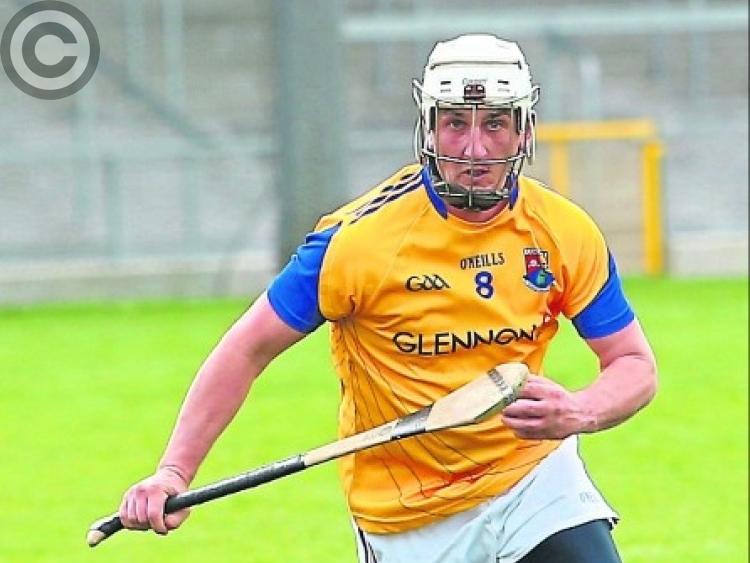 David Buckley, who scored 2-6 for the Longford senior hurlers in their great win against Monaghan in the Nicky Rackard Cup on Saturday last. Picture: Syl Healy

A magnificent second half performance saw Longford come from nine points down at the break (0-14 to 0-5) to record a crucial victory over Monaghan in the Nicky Rackard Cup Round 2 clash at the Inniskeen grounds on Saturday last.

They took the game to the home county from the very second the ball was thrown in for the second half and immediately David Buckley had scored his first goal to bring Longford back in contention.

Tipperary native Buckley followed that up a second goal for Longford in the 43rd minute. Monaghan tried to get something out of the game but Longford defended excellently with Eanna Daly pulling off a great save to deny Brian McGuigan in the 55th minute.

Late points from Cathal Mullane, Bart Hanley and David Buckley clinched a great win and Longford now take on Armagh at Glennon Brothers Pearse Park on Saturday June 1 with a place in the Nicky Rackard Cup semi-final at stake.

No matter what happens in the remaining group fixture Derek Frehill’s gutsy side have consolidated their Nicky Rackard Cup status in condemning Monaghan to the relegation play-off.

Longford appeared to have opened the scoring in the second minute but Reuben Murray’s effort was signalled wide after some hesitancy from the umpires. They ruled out a point later on in the first half and were hesitant on a number of occasions.

Mark Treanor set up Stephen Lambe for the game’s opening point for Monaghan in the fourth minute. An unmarked Martin Murphy fired over a fine long range point minutes later. Longford got their first score on the board in the ninth minute; Cian McLoughlin done well to clear the ball out of defence to Cian Kavanagh who shot over the bar.

Monaghan then took a hold of the game with them putting over nearly every chance that came their way. They hit over six points in a row to lead by seven by  the 20th minute. Longford thought they had registered their second point minutes later but it was waved wide much to the frustration of the Longford players and bench.

The lead was nine points in the 24th minute with more Monaghan scores from Fergal Rafter and Mark Treanor. Longford then got scores on the board in a three minute spell through David Buckley (two frees) and a fine point from Cathal Mullane.

Monaghan restored their seven point advantage in the 31st minute but credit to Longford they continued to hassle with Johnny Casey setting up Reuben Murray for a neat point in the 33rd minute.

Monaghan ended the first half well with three scores  in a row to extend their advantage to nine points going in at the break.

Longford made a terrific start to the second half and with eight minutes gone on the changeover they were on level terms. Within seconds of the restart David Buckley found the back of the net with a powerful shot. Points from Reuben Murray, Cathal Mullane (free) and Buckley left just three between the sides by the 40th minute.

Three minutes later and the game was all square when Buckley scored his second goal. Monaghan’s response was a goal through Tadhg Campbell to put them back in front.

Longford’s heads didn’t drop though and they fought until the end to get the vital scores to seal a memorable win over Monaghan who had Jamie Guinan sent off in stoppage time for remonstrating with the referee.