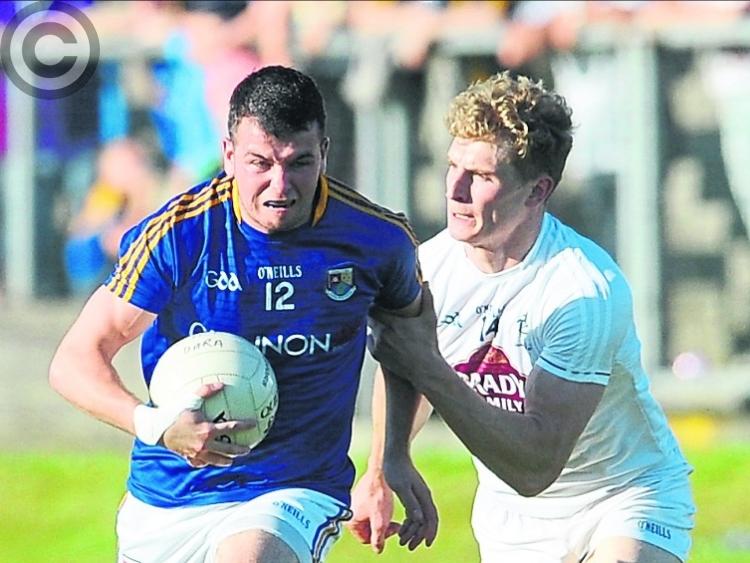 Barry McKeon on the ball for Longford in evading the challenge of Kildare opponent Daniel Flynn. Action from the All-Ireland SFC Round 2 Qualifier last year. Picture: Declan Gilmore

O’Connor Park in Tullamore was the scene of Barry McKeon’s championship debut for Longford and where Mullinalaghta won the Leinster Senior Club title.

Barry is hoping it’s the scene of a famous Longford victory when they face Kildare in the Leinster SFC quarter-final on Sunday.

McKeon said: “We know Kildare a long time now; we have played them a few times. We definitely owe them one. It would be nice to get that win over them.

“It would be the first time in a very long time for Longford to get to back to back Leinster (SFC) semi-finals. Kildare are strong and have been a bit of a bogey team for us at minor, U-21, junior and senior level.”

Between one thing and another Longford go into the game without the services of several of last year’s squad but McKeon believes it’s a chance for others to shine.

“Some of the best players we’ve had in the county over the last number of years aren’t available to Padraic (Davis).  It does give other players their chance. It’s a new set-up but we have some solid performers in the squad.”

When McKeon emerged onto the county scene he was one of the best young forwards in the county. Since then he has played in several different positions; including doing a competent job in defence.

“I don’t mind whatever position I’m put in. It doesn’t matter to me. You would always like to be playing in a certain position but when it comes to match day you just want to be out there. The way the game is gone there is no such things as positions.”

McKeon’s physique has also changed in recent years. He said  it was something that he needed to do.

“I was fairly light when I was 18/19. I didn’t put on weight just because I wouldn’t be easily pushed off a ball. Though I never wanted to get too big,” he joked. “Strength and conditioning is part and parcel of the game these days.”

The Colmcille man is his club’s only representative on the county panel. He is surprised himself that many more haven’t come in but knows there is huge commitment required with being an inter-county player.

“There hasn’t been a lot of representation from the club. It is surprising, in a way because there are a couple of good players there. They are young and they probably will get their chance. It’s not everyone’s cup of tea and it’s a lot to ask of any lad. I work in Longford which is convenient and I love it too.”

When you talk about Colmcille to McKeon, you have to mention the late Eugene McGee. Although he didn’t have too many dealings with McGee, he knew how important Colmcille meant to him.

“The last time he spoke to us as a group was when Denis Connerton was there. I wouldn’t have had many dealings with Eugene.

“The Colmcille team that won the championship in 2008 had him out a few times. He was a great clubman of ours and he is a huge loss. It was tragic the way it happened too,” commented McKeon.

Padraic Davis is the third Longford senior manager Barry has played under. He is full of praise for Davis and his backroom team.

“Padraic was there with us as the manager at U-21 level and I was involved in the senior panel with Paul (Barden).

“Padraic is not a huge talker but when he talks everyone listens. It’s the same with Donal (Ledwith). Padraic is a great motivator. In 2010 he came into us at half-time in the Leinster Minor Final and gave a speech. That helped us as well in winning the title.”