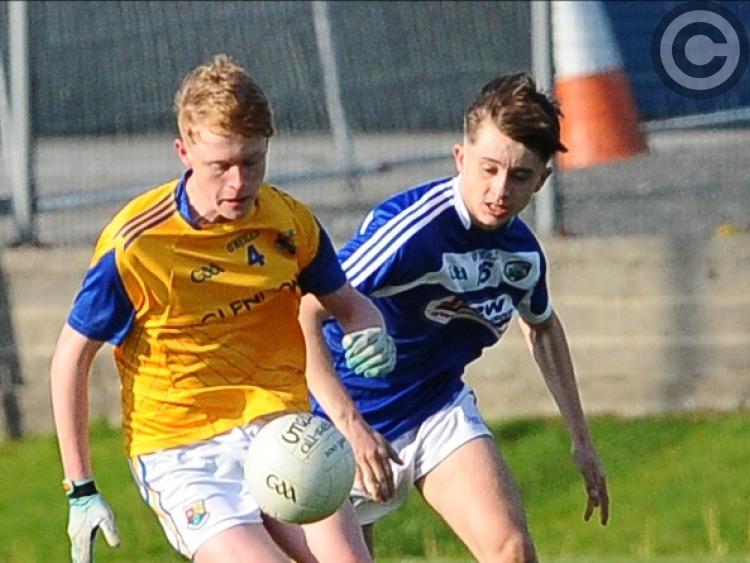 Cathal Gilligan on the ball for Longford against Laois. Action from the Leinster Minor (U-17) Football Championship Round 3 group game at Glennon Brothers Pearse Park. Picture: Declan Gilmore

Longford, trailing by the wide margin of 11 points in the closing stages of the first half,  crashed out of the Leinster Minor Football Championship as a great comeback just failed in the Round 3 fixture at Glennon Brothers Pearse Park on Saturday evening last.

Boosted by a brilliant start which yielded a gift of a goal from full-forward Rioghan Murphy with just 30 seconds gone on the clock, Laois appeared to be cruising to a comfortable win when they built up a commanding 2-7 to 0-2 lead.

Murphy also scored the second goal in the 19th minute but Longford were given a glimmer of hope when Keelin McGann burst his way through the Laois defence to set up Jack Duggan who finished the ball to the net in the 28th minute.

The visitors ended up leading by 2-9 to 1-5 at the break but Longford came storming back in the early stages of the second half to close the gap to just two points thanks to scores from Ronan Sheahan and Duggan (free) along with a well struck goal from Tiernan Hussey.

Half-time substitute Hussey received the perfect pass from Keelan McGann who raced through on one of his many penetrating runs during the course of the entertaining game.

That was really putting it up to Laois but they hit back with three points in a row through Colin Dunne (2) and Brian Whelan (free) and managed to consolidate their grip on the game to emerge victorious.

Aaron Farrell replied with a point for Longford and got injured in the process and was forced to retire. Laois tacked on two more scores, a brace from Whelan (free and play), to lead by six (2-14 to 2-8) and were reduced to 14 players when Dunne was sent-off in the 60th minute after receiving a second yellow card.

While Longford finished strongly in a frantic finish to reduce the deficit to two points with three scores from Jack Duggan (two frees) and Tiernan Hussey also on target, the home side were unable to engineer a dramatic last gasp winning goal.

But it could have been a different story. Whereas the razor sharp Laois attack were making the best use of their scoring chances, Longford were guilty of shooting six wides in the first half which included three frees.

A terrific save by the Laois keeper Michael O’Connell kept out a point-blank goal attempt from Keelan McGann in the 24th minute and the same player elected to take a point when in a great position to find the back of the net just before the break.

Having said that, Laois were by far the better team in the first half and were denied another goal when centre-half-forward Brian Whelan had a shot blocked when looking all set to plant the ball in the net.

The impressive Whelan fired over four points (two frees) in the first half while the other scores came from Colin Dunne (2), Rioghan Murphy, Conor Goode and Oisin Hooney.

Jack Duggan registered 1-3 for Longford with Aaron Farrell and Keelan McGann also getting their names on the scoresheet but were facing a real uphill battle in the second half.

They proceeded to show a lot of  courage and character in producing a fine second half performance to outscore Laois by 1-7 to 0-5 in almost keeping their championship hopes alive.

The introduction of substitutes Darren Moffett and Tiernan Hussey made a  big difference in revitalising Longford and while both had injury problems their presence on the pitch from the start might have swung the game in favour of the home side.

As it turned out Moffett was dismissed for a black card offence in the 51st minute and this proved to be a significant setback.

A number of harsh decisions went against Longford in the second half, much to the anger of the home supporters who were loud in their criticism of Dublin referee Dan Stynes,

In the final analysis the county U-17s were left to rue a poor first half display in failing to make further progress in the championship and this was a big disappointment.

Joint managers Dan McElligott and Barry O’Rourke now turn their attention to the Leinster Minor Shield with the chance of some consolation for the side against Offaly at O’Connor Park, Tullamore on Saturday 1 June.