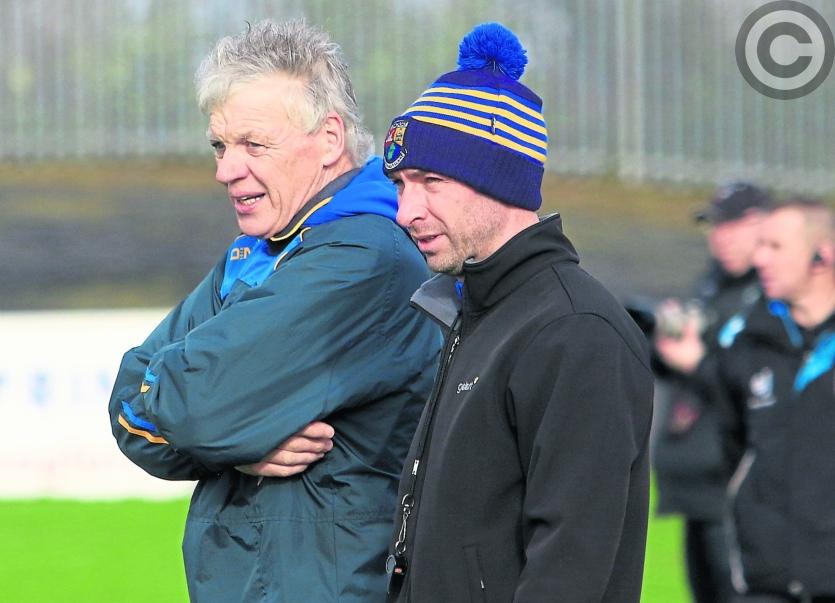 Dan McElligott (Mullinalaghta) and Barry O'Rourke (Slashers), the joint managers of the Longford U-17 football squad.

Longford, trailing by the wide margin of 11 points in the closing stages of the first half, crashed out of the Leinster Minor Football Championship as a great comeback just failed in the Round 3 fixture at Glennon Brothers Pearse Park on Saturday evening.

Boosted by a brilliant start which yielded a goal from full-forward Rioghan Murphy with just 30 seconds gone on the clock, Laois appeared to be cruising to a comfortable win when they built up a commanding 2-7 to 0-2 lead.

Murphy also scored the second goal in the 19th minute but Longford were given a glimmer of hope when Keelin McGann burst his way through the Laois defence to set up Jack Duggan who finished the ball to the net in the 28th minute.

The visitors ended up leading by 2-9 to 1-5 at the break but the Longford U-17s came storming back in the early stages of the second half to close the gap to just two points thanks to scores from Ronan Sheahan and Duggan along with a well struck goal from half-time substitute Tiernan Hussey.

That was really putting it up to Laois but they hit back with three points in a row through Colin Dunne (2) and Brian Whelan (free) and managed to consolidate their grip on the game to emerge victorious.

Laois, who are now through to the Leinster minor semi-final as group winners, were reduced to 14 players when Dunne was sent-off in the 60th minute after receiving a second yellow card.

While Longford finished strongly in a frantic finish to reduce the deficit to two points with Tiernan Hussey and Jack Duggan on target, the home side were unable to engineer a dramatic last gasp winning goal in the six minutes of stoppage time.